This is the third album from Hebden Bridge based Uncle Wally and Uncle Steve. The name that this duo chose to play under – clearly their names are not Wally and Steve, or perhaps they are that should remain a mystery – may indicate that what they do is some sort of novelty or comedy music. I guess I should own that comment, the name gave me the impression that what I was going to hear was some sort of novelty or comedic record. This is actually far from the truth. Not that that would have been a barrier to the album being reviewed, if it was a good example of that kind of music I’d have been happy to review. But it isn’t, so it’s all good. It is something different to the majority of the releases we review but I like something different.

Before I dive into the songs. I’ll say that their music has what I’ve decided to call ‘a certain retro charm’. Or possibly that what they do ‘lovingly celebrates music from the past’, that past – in the case of this album – being the late 60s/early 70s with occasional side trips to other things. This may imply that in some way they’re just ‘reproducing’ that music but, again, this is far from the truth, it’s original and good.

Opening song ‘DC7’ is going to set the scene for at least some of the album. It has the feel of say The Byrds, lots of harmonies, that kind of country psychedelia feel. But they add a rather wonderfully jaunty organ. And they’re not afraid to add a rockier element. Lyrically this song is about going on holiday. The words have a slight edge of, let’s call it, corniness but strangely this doesn’t jar.

‘Funland’ is a weirder, more out there thing – it’s more of a psychedelic pop song, although it edges out to something more psychedelic. Feel and tempo changes aplenty. Sweet sweet guitars, keyboards, voice effects. Yet somehow it has hints of music that doesn’t fit into that theme. There is a change of feel for ‘Slow Lane’. It sounds sometimes like an 80s slow pop song but there are trippy sounds mixed in there – Eastern sounds.

‘G-String Love’ mixes something of an 80s’ AOR slow song, hints of prog into something that is compelling musically. Subtle guitars hold your attention, a great arrangement. It does however have the odd moment when things jar – there’s a drop out to something slightly art-rock that I found odd in the smooth feel of the rest of the track.

‘Not The Same’ has an intro that sounds of all things like a lounge band doing The Doors that kinda bends into something that sounds like gentle prog with hints of a jazz thing going on in the keyboards. Again you may get the idea that musically this isn’t going to work but the transitions are so smooth it does.

And they follow this with ‘Shadows’. This is a slight return to the lounge band sound. Actually I’m condemning this with slight praise, because actually this is a pop song in say the vein of Bacharach, smooth with lovely horns, a swing to die for.

‘It’s All Gone’ has a feel, or something of a feel, of 70s’ art-rock. Talking guitar, slightly quirky vocals. Hints of Bowie in places – some of the vocals for one. For some strange reason, a reason I can’t define, I have fallen for this song in a big way.

‘Bad Men’ is one part Americana, one part rocking out, one part something a bit proggy. This may sound like a recipe for disaster but it isn’t, what you actually end up with is something epic, something that takes you on a journey musically.

I haven’t covered all the songs on the album but what I’ve done is to pick out things that for me define what Wally and Steve do.

Look before I go on, I have to say that Steve and Wally are incredibly talented musicians – as far as I can work out they play all the instruments on the album. I can’t fault the album musically in any way.

Some of the songs work better than others. To be honest having listened to the whole album more than once I found the number of songs that I really liked increased. It’s one of those things that you have to let grow on you. Their world is quirky – they mix sounds and genres of music up. Some of the lyrics can be a little jarring at times. But the more you listen to the album the more you get what they do, but you need to open your mind. You may, at times, find yourself smiling at their music but there’s nothing wrong with that.

Right at the top of this review I said this wasn’t a novelty or comedic album, and I’m sticking with that. But I will admit that in the process of writing the review I’ve come to see at least some of the songs as being in the vein of Neil Innes. Whether this is the intention the duo had I have no idea. I have to say that I rather like these a lot. But the thing is that these are mixed in with songs that are just great songs played really well.

I hope I’ve at least intrigued you enough to take a listen to the Bandcamp stream, and make up your own mind. I’ve already done that and I rather enjoy Steve and Wally’s musical world, I enjoy it a lot. 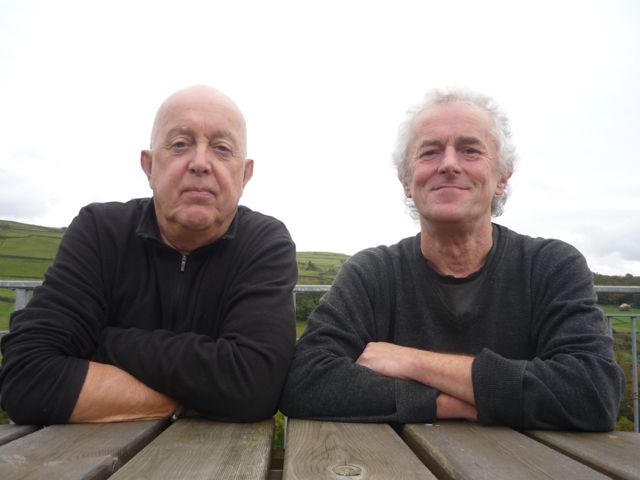 Steve and Wally live in Hebden Bridge, West Yorkshire. They’re knocking on a bit, but still planning on livin’ the dream some time soon…

They also both play in bands based in Hebden Bridge – Wally in Owter Zeds and The 844s, Steve in Pepperjam and The Last Chance Saloon Band.