Mollie Marriott is very proud of her heritage (daughter of former Small Faces and Humble Pie singer/guitarist Steve Marriott and step-daughter to singer Joe Brown) but it does not daunt her, she is ready to go it alone and will release her debut album “Truth Is A Wolf” on Friday 3 November 2017 via Amadeus Music.

‘Truth Is A Wolf’

Says Mollie, “I’m really excited about the album. It features a lot of different styles and I think it really showcases my vocals. We have a lot of fun making the album and I hope people enjoy listening to it. I can’t wait to perform the songs when we tour with Bad Touch during November”.

She has released ‘Control’ from the album, and this is supported by a music video.

“Control is all about taking back control of my music,” says Mollie. “It was important so this was the right single to start with. I’m in the driver’s seat going where I want to go. I co-wrote the song with Sam Tanner, lead vocalist with Brother Strut. We knew right from the beginning Control was the perfect song to release as the first single from the new album.”

Mollie began writing the debut album in Nashville and has fond memories of the recording process. She teamed up with Paul Weller whilst recording, who appears on two tracks, ‘Truth Is A Wolf’ and ‘King Of Hearts’.

Says Mollie, “I went to Nashville to start writing the album. The title track ‘Truth Is A Wolf’ was written by Gary Nicholson, he was going to give it to Bonnie Raitt or Susan Tedeschi – two artists who are big influences to me. I heard the demo just wurli and vocals and thought it summed up my album. It was the perfect tile song.”

“A lot of the songs reflect my life. ‘Broken’ is all about ending a relationship and the effect that had on me and my daughter. It’s a rock album, but there are also elements of gospel and country. It’s grungy, too. I am a grunge girl. I love Chris Cornell and Pearl Jam. Alanis Morrissette’s ‘Jagged Little Pill’ is a favourite album of mine, and also a big influence.”

The album is available for pre-order now through www.molliemarriott.com available as Limited Edition Red Vinyl and Deluxe CD and Standard CD. Fan favourite Bundles are available with exclusive signed merchandise ranging from T Shirts, Posters, Set Lists, Unique Polaroid images and even house gigs. Anyone who pre-orders any of the bundles will receive Mollie’s first single “Control” as a thank you on Friday 28th July.

CONTROL
The band Dorothy inspired the vibe of this song. I was fed up of women using their femininity and beauty to get what they wanted and trampling over me and the people I loved. Taking us under their wing and then shitting on us from a great height. I’d had enough with everything combined and decided right, I’m taking my life back and I’m going to show you I don’t need you. It’s definitely a favourite to play live!

BROKEN
I wrote the bones of this when I was in Nashville. Most of the lyrics and melody with the drum beat and then took it to Sam. It was a time when I really looked back at my relationship with my daughter and realised how I had failed when my fiancé and I had split up. I was so blinded by hurt and thought she was so young she wouldn’t notice but she did so the song is about her. This is the one song I wish I didn’t know how to write. It’s an apology showing her that no matter what happens is us against the world.

TRUTH IS A WOLF
I didn’t write this but it was played it to me when I was in Nashville. I knew I had to have it, so begged Gary for a few days. It was one of those songs where I think,” Damn, I wish I wrote that.” I love the lyrics as they are quite dark and poetic. Musically, it was obvious where we were going to go with it. I wanted the classic old school sound to match it but with a modern hit and I think we got that. The lyrics summed up the whole album to me so it made sense to call the album it. Ties it all in a bow.

GIVE ME A REASON
I suppose this is my only lovey dove song. I had the bones of this track and we all built around it. This song is very personal to me and always broke my heart but now makes me smile. How lucky to be able to love like that! The background vocals of Sam, Jim and I always make me cry. One of my favourite songs “anytime you need a friend” by Mariah Carey inspired those background vocals.

RUN WITH THE HOUNDS
This song stemmed from the phrase “Run with the hare and hunt with the hounds.” It was shortly after I’d gone through hell with a previous label. We’d turned the phrase and made it as we have to run with the hounds to the same goal. I had the melody for the verse and bridge and then it all just flowed and came so quickly. It was originally a ballad but we got a Fleetwood Mac vibe into it from the drums.

LOVE YOUR BONES
I wrote this when my friend died unexpectedly from illness. It wasn’t meant to be terminal. I wrote it from his girlfriend’s point of view and it took quite a while to get this lyrically right. I used to say to him, “Oh I love your bones.” Again uncomfortable but true. Tori Amos inspired this one for me.

TRANSFORMER
I turned up to the session with the lyrics to the first verse. I was thinking on the train how much I changed when I was with a man. I was never myself and always morphed into what they wanted mainly much to my detriment. I thought it was quite powerful and something that a lot of people can relate to. I wanted the music to be very haunting in this to mirror the message of the ghost of your former self. It was important that it made people feel uncomfortable. It’s my favourite to sing, as it’s a constant reminder to just be me and the right person will accept it.

FORTUNATE FATE
This is the first song I wrote on guitar. Safe to say this was definitely Pearl Jam inspired. I wrote it for a friend who was creating a tea mess for himself and didn’t think I could see and I knew he was scared to admit it out of fear of judgement. This was my way of saying, “I know, it’s ok because I know this isn’t who you are it’s just you looking for an escape but let’s face this hand in hand together.”

KING OF HEARTS
Graham sent over a demo he’d done of just chords and I had the melody down in ten minutes of hearing it. I had a rough idea lyrically with “Walking in a straight line,” but sent it over to Jude who wrote the majority of the lyrics. I altered a few to fit to a situation that I had found myself in. Lyrically and musically, it’s quite sleazy and naughty, and that’s what I love that about it. I wanted this to sound quite grungy. It was actually one of my favourite recording experiences on the album. We had all the lights out and just rocked it all in one room.

MY HEAVEN CAN WAIT
This was the real lowest point of my epic emotional crash of 2012.  I was completely lost in everything and had truly hit rock bottom. This song is about how everyone kept telling me to get up and sort myself out, but I wasn’t ready to just yet. I had to stay there a while and wallow in it all. I knew I would awake from it at some point but had to in my own time. I think that’s important for everyone. I wrote it with Jim who let me crash. He said once I couldn’t get lower the only way is back up. When you stuff it down it will come back to haunt you in the future.

Musically we have the harmonica drone from Ben which I think brings that dark/ eerie element with a twist and I love that. I wanted the background vocals to sound haunting like the ghosts of my past.

ARMOUR
This song is one of my favourites. I love the simplicity of the production. It originally was a full band vibe but then a song by Florence and The Machine inspired me to just strip it to electric and it totally worked. Making the lyrics more prominent which is important to me. This is a battle of love. A frustration, a support and a best friend. I’m saying, “I’m here no matter how hard it is.”

GRAVITY
Tom sent me some chords that he’d put down a few years back and did nothing with. I instantly fell in love and had the melody done within an hour. This song took me two months to write and drove me mad! I had to get it right. This song is my homage to a man who has been in my life since I was six and helped me back on my feet. 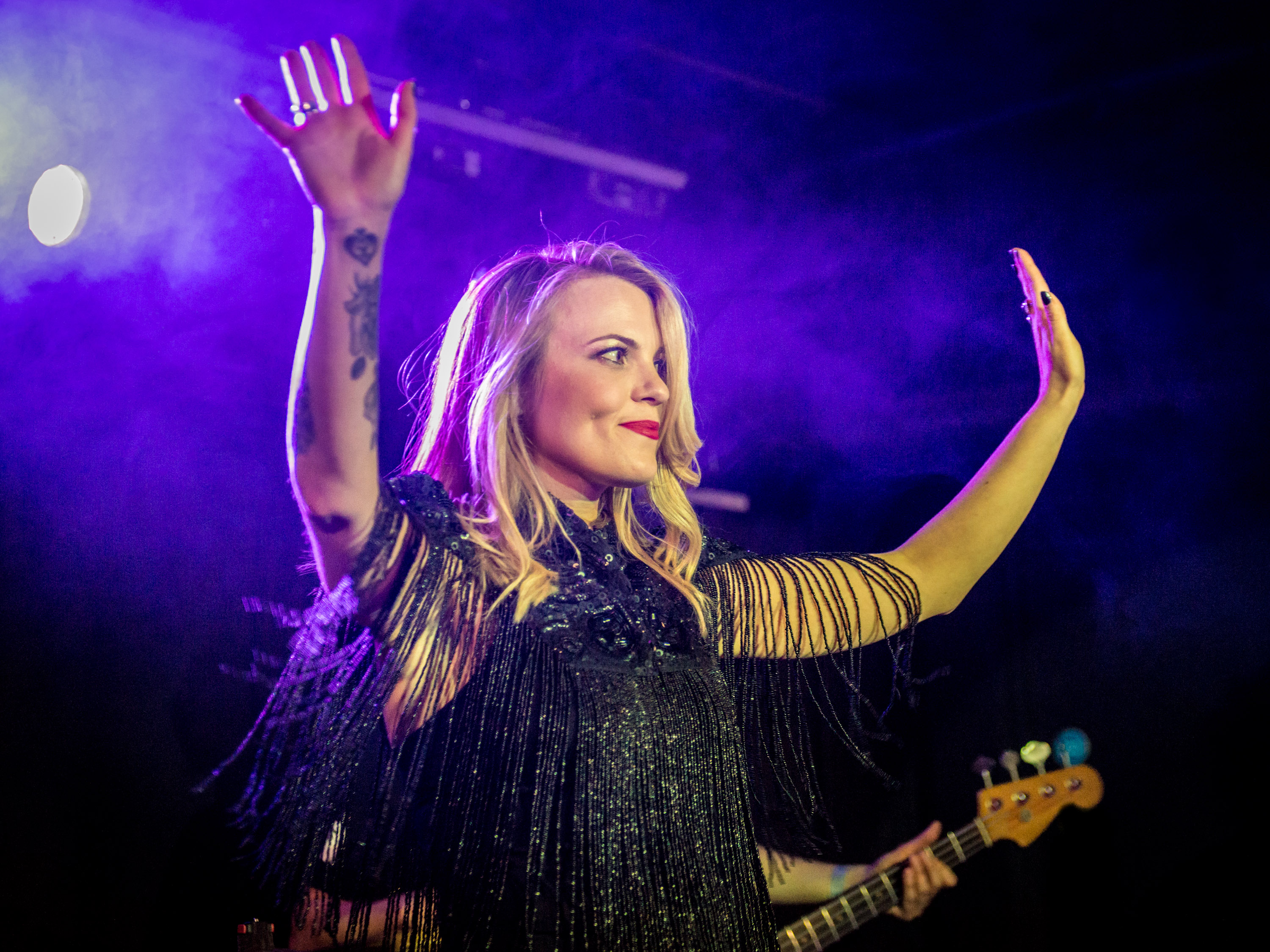