Why in name of all that is unholy have I ever not heard anything by Pornographic Sunset before. I have, of course, seen the name – which the band describe as ‘a superficially tranquil name with disturbing undertones’ – and been somewhat unsettled by it (which of course is a good thing).

If you’ve been unsettled by the name in a bad way, then the music’s gonna freak you out. For this is a band who throw musical convention and the concept of genre to the ground and tread on it hard until it lies twisted and torn.

Opening track ‘Self in Solution’ opens sounding like some fucking scary Gothic doom metal track; sounds are twisted and warped. But, and I kid you not, it then bursts briefly into bluegrass, before mutating into acid drenched doom rock and then further into ramshackle shoegaze with a hint of jazz strangeness.

This may sound horrible or, at the very least, a mess but it isn’t. This is very much a cohesive track; the sections merge into each other in a strangely beautiful way, that is unless the band don’t want them to. And this isn’t of course something new. The band say ‘the past, as has been often said, is prologue’.and in the case of their music that prologue has included – and I’m making assumptions here – Frank Zappa, Tom Waits, Captain Beefheart, avant-garde jazz rock, strange Goth bands, Cardiacs, The Band of Holy Joy, the extremes of progressive rock, acid rock and psychedelia. I’d then add in Doom Metal and noise rock, and anything else that builds on these. It is of course entirely possible that they took all that and then ignored it. Please bear this in mind as we go onto the next track.

‘Session with Dr. Michaelson’ sounds like progressive jazz rock – and in particular The Hedvig Mollestad Trio – crossed with later period Tom Waits, Marilyn Manson and Bauhaus. Totally out there drumming, discordant keys, trumpet, jazz guitar to name but a few. This is truly disturbing and incredibly beautiful, as it builds to all out sonic assault.

‘Diabolical’ is a Pornographic Sunset take on the angular post-punk funk of The Gang of Four or Public Image. That is until it suddenly mutates into something that comes out of West Coast rock with the most wonderful Santana like ending. And this my friends grooves like fuck, it will not only move your feet but your internal organs.

And that is it, well it is unless you get the EP they distribute on USB sticks at their gigs. If you do that, and you should, you get an extra track. ‘Dead People’.

This comes across as a cross between the wilder excesses of The Incredible String Band, The Band of Holy Joy, insane punk, weird spoken voice, psychedelic acid rock, early Pink Floyd and grunge. It is epic in all of its 6 minutes and 22 seconds.

Although this is obviously genre defying music, what this EP demonstrates is that this isn’t a band doing this just for kicks; it’s the sound of a band doing their own thing and doing that so wonderfully. They don’t have to worry about fitting into a musical niche because they’re already in a niche; their own niche with space for them and them only.
And although it might help you get their music if you have something of a hold on the eclectic music that came before, it’s not a necessity. You just need to let go of the conventional, the expected and open yourself up to the unconventional and the unexpected.

This is one of the most incredible fucking things I’ve heard in a long time. Inventive, clever, and way way way out there. Just do it people. 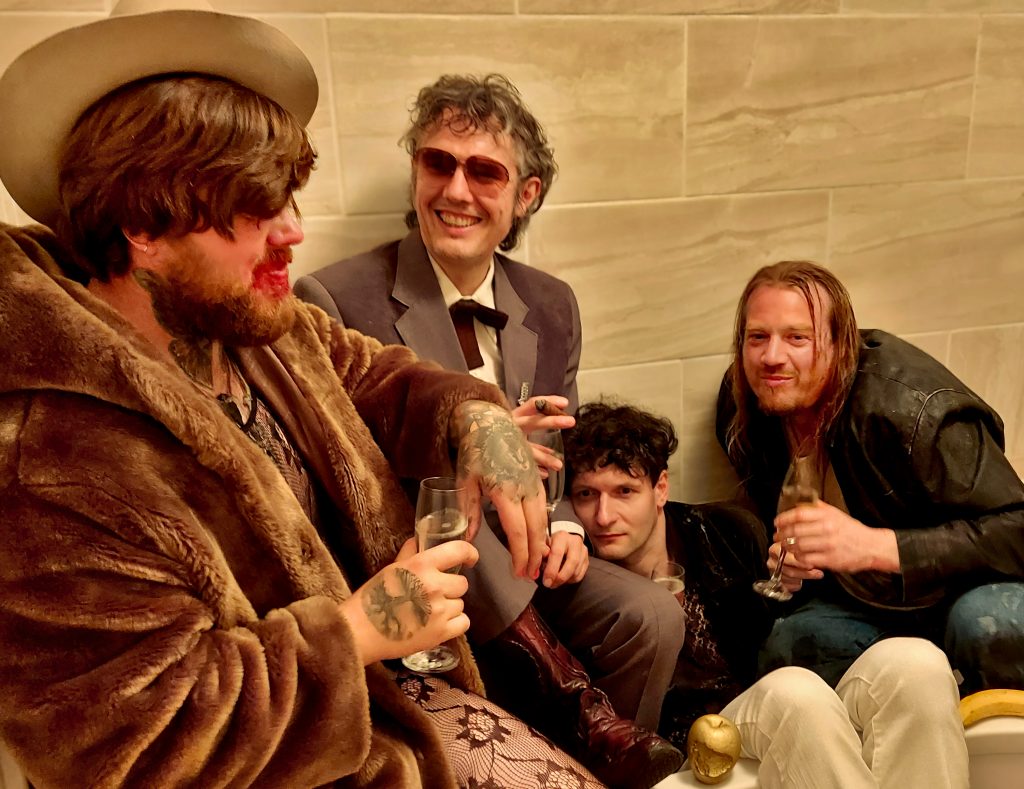 It is not often I reproduce a bio in full and without edit but it seems entirely appropriate here. The band say

Ballistically bright and impossible to restrain, oblivious to expectations and wilfully ignorant of boundaries and ‘good taste’, Pornographic Sunset are a firework display against the night sky of reality. The EP, Gold; Flesh; Dirt fizzes with dangerous levels of exuberance and invites your body to move in sympathetic abandon. Even those who grow anxious at the very suggestion of tripping the light fantastic may find their internal organs twitching in a disconcerting display of unprecedented cool.

This proudly Leeds-based band know what they’re doing is right and it’s up to you to work out why. Comparisons serve little purpose here but, were you to seek kindred spirits, you might tip your hat towards Martin Bisis’s work at B.C. Studio (one time home to Sonic Youth, Swans, Cop Shoot Cop and the like); or you might haul out an old copy of C/Z records compilation Teriyaki Asthma and wonder how Pornographic Sunset managed to catapult themselves some thirty years into the future.

At any event, comparisons lack lustre when grinding riffs give way to chicken-pickin’ country
grooves via lysergic indie drones, so it’s probably just easier to admit defeat, pick up the EP and play it at neighbour-threatening volume until the ceiling collapses.

Pornographic Sunset are an incredible live proposition and that is the medium they value the most, so when Gold; Flesh; Dirt is released view it as an invitation to the carnival of their on stage performance. In fact, while three of the songs that make up this EP will be available
digitally via all major platforms, the only way to get all four songs will be on specially engraved USB sticks, distributed exclusively at Pornographic Sunset shows. Stand and watch from the poolside and nothing about this band will make any sense…but dive in head first and you may just have the time of your life!

If the world truly does get the media it deserves, then the ravaged remains of the UK both deserve and require the services of Pornographic Sunset. As the band themselves are fond of saying: “it’s just a bad dream”.