Ellen Cole the Curator of the festival says: “Each year we strive to offer our audiences a great musical experience and this year won’t disappoint. We have a wide range of musicians and bands on the line-up, some of which will be known and some of which will be unknown. We showcase the work of a diverse range of musicians as our aim is to inspire and encourage our audiences to actively go out and watch local, regional and national artists regardless of whether they have a record deal or not. There is a lot of talent not just in York, but also Yorkshire and beyond and the aim of our festival is to offer a platform for that talent. We showcase a wide genre of music from country to surf rock and from funk to folk, so that there is something for everyone to enjoy. Our September festival runs alongside the York Food and Drink Festival, which means there will be plenty of delicious local food and drink for everyone to enjoy.”

Ellen goes on to say: “the line-up is phenomenal this year and we cannot wait to see what our audiences think. We pride ourselves on offering a family-friendly and fully inclusive event and each year to ensure that the venue is fully accessible so that everyone can get involved with our incredible festival. We even have bunting this year, which I for one cannot wait to hang up… I get pretty excited over little things!”

Entry into the festival is free of charge and everyone is welcome. Throughout the event, York’s Little Festival of Live Music will be fundraising for York Mind, a local charity which helps local people with mental ill-health. Any donations, however big or small, will be greatly appreciated. 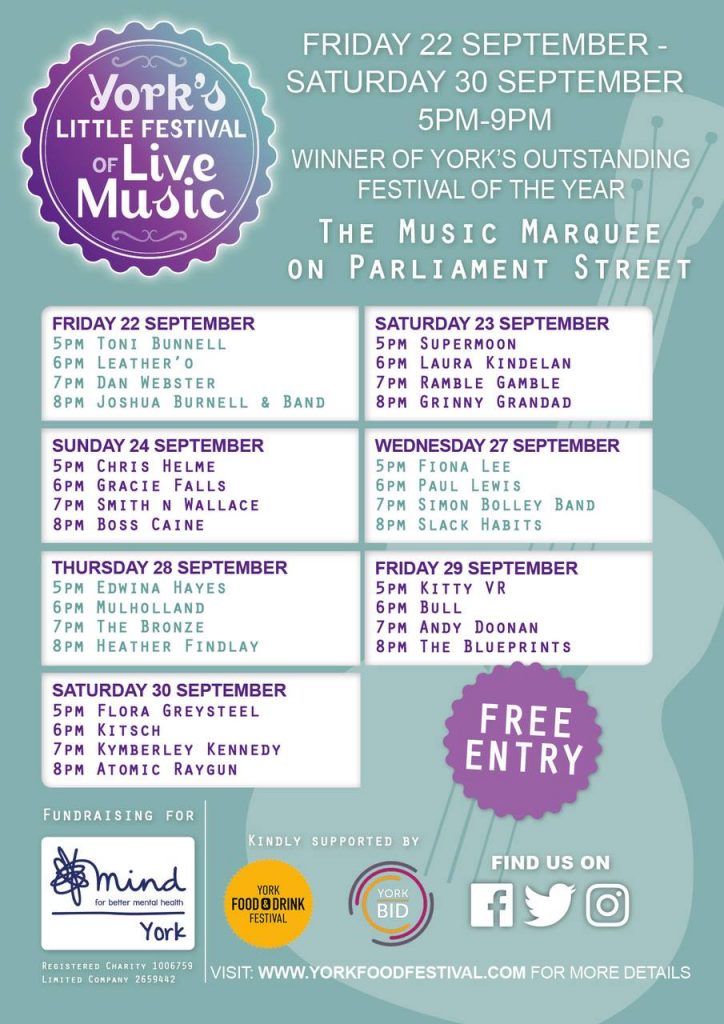