Tramlines, Sheffield’s award-winning inner-city festival, has unveiled a stack of new talent for the Saturday instalment of its official after-parties, which will take place at Fusion & Foundry and Yellow Arch Studios on Saturday 22nd July. A host of leading DJ talent has been added to the bill, including Gilles Peterson, Gerd Janson, Nightmares On Wax (DJ set), Andy Butler (Hercules & Love Affair), Prince Fatty & Horseman, 2 Bad Mice and dozens more. Curated in association with local promoters Nice Like Rice, Off Me Nut Records, Roots and Wild Live, the latest additions to the Tramlines after-parties pack a punch of quality house, techno, jungle, disco, grime and everything in between, and with tickets from just £12 + booking fee, you’d be hard pushed to find a better value ticket.

Joining Tramlines for a takeover at Fusion & Foundry (Sheffield University) on Saturday 22 July is the ever-popular Nice Like Rice. The food-loving party crew can be regularly found serving up disco and house all over Sheffield, and for Tramlines they’ve pulled together a wickedly diverse lineup. Heading up the bill is BBC 6 Music selector and Tramlines’ favourite Gilles Peterson; the inimitable Nightmares On Wax; Gerd Janson, one of Germany’s most in-demand eclectic talents; Andy Butler, better known as the driving force behind retro-futurist kingpins Hercules & Love Affair, and the Nice Like Rice DJs.

Across the city at Yellow Arch Studios, festival-goers can expect a large dose of jungle, grime and bassline. In the Main Room, the brains behind 20Hz Soundsystem, Roots, will team up with Wild Live – the brains behind quality underground parties including Freshen Up and Boom Ting – to present renowned reggae producer Prince Fatty alongside MC supremacy Horseman. Cult label Off Me Nut Records step into the Warehouse (Room 2) to present a floor-shaking party with hardcore breakbeat outfit 2 Bad Mice, while many of the label’s top producers, such as Phatworld and Superior Cornrows will go back-to-back in what will undeniably be a rowdy grime-beat affair! Over in room three is drum and bass collective Displace, who bring even more beats and basslines to the proceedings with the Displace Crew and resident DJs. 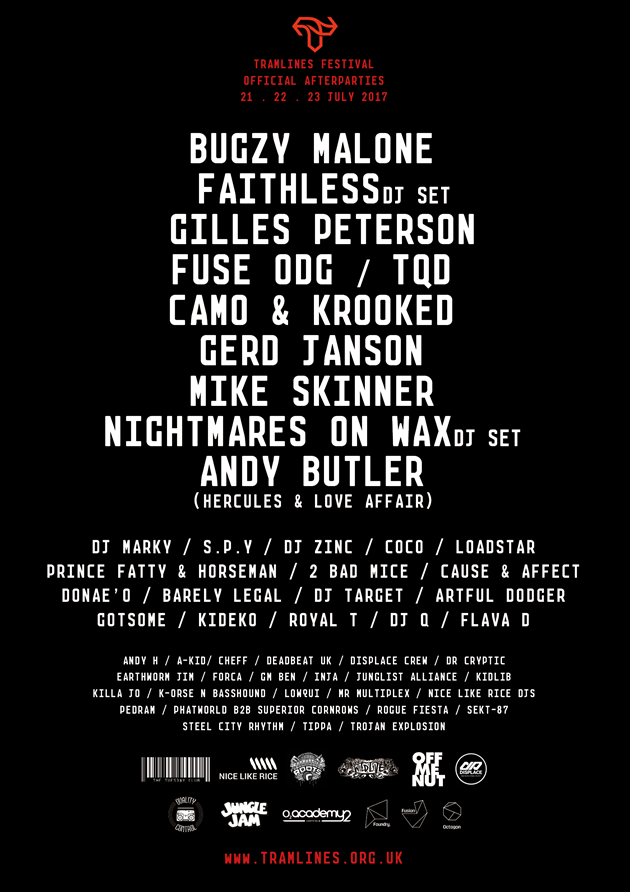