Since the first Pitmen Poets tour in 2011, Sam West’s revival of the seminal “Close the Coalhouse Door” has completed a triumphant UK tour and Lee Hall’s “Pitman Painters” has been a hit in the West End and also on Broadway.

Interest in the North East’s mining tradition has never been more intense. What better time could there be for an opportunity to experience the brilliant entertainment of The Pitmen Poets?

“ The stark setting of New Hartley’s Memorial Hall was transformed into an emotional hothouse during the concert by the Pitmen Poets. The audience sang along, laughed and also shared moments of sadness as the combined talents of Billy Mitchell, Jez Lowe, Benny Graham and Bob Fox took them on an epic journey through the life and times of the Northumberland and Durham coalfields. What a great night!” Brian Coles, Rock of the North

With archive footage and photographs, this is a journey through the centuries of a once-great industry, from the songs that saw it thrive and dominate, to those that saw it’s demise and the resulting aftermath.

“…it was most definitely standing room only as the audience filled the room (and beyond) to be equally moved and amused by songs spanning two centuries” Living Tradition Review, Costa Del Folk

So join The Pitmen Poets at The Civic for an evening of entertainment and revisit a subject close to Barnsley’s heart through music and song. 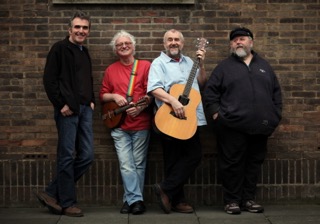