I’d heard that Chantel McGregor was one of those performers who is a pleasure to interview, and I certainly wasn’t disappointed. Friendly, down to earth and very patient with all my predictable questions she was a real delight to talk to.

In response to my question about how she likes her sound to be described, Chantel told me ‘I always answer that as ‘Chantel music’ – which is rock, progressive and singer songwriter, and very based around the electric and acoustic guitar.’

Chantel came from a family that was into guitar music – and remembers listening to Fleetwood Mac, Free and Led Zeppelin in her parents car, from a very early age.

‘My dad played guitar and when I was three he got me a half sized guitar, and tried to teach me how to play it and then he got me lessons at 7. I was always practicing and when I was 12 my parents were taking me to jam sessions in the Bradford area and was turning up at school looking tired …’

Being at a school which didn’t offer music on the curriculum for either GCSEs or A levels, Chantel decided that she would probably become an English teacher. At 16, she says she knuckled down to study for exams and music went onto a back burner for a bit. However her passion for music won over from any thoughts of English teaching and she opted for a degree in music at  Leeds College of Music and became the first student in the college’s history, to achieve a 100% pass mark, with 18 distinctions. Chantel left with a First Class Honours degree in Popular Music and a coveted prize, for outstanding musicianship. 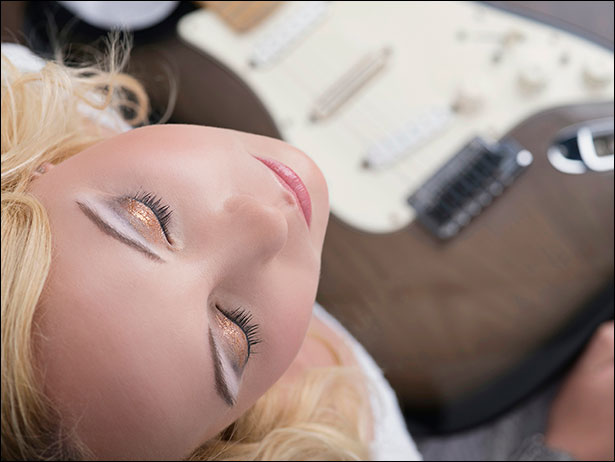 It was while she was doing her degree that Chantel put her band together. ‘I was multi-tasking, studying and also gigging locally places like Harrogate, because I didn’t want to travel too far away from my course. We developed a following round Yorkshire, and it meant that when I finished my degree I could properly launch my career and start to do festivals.’

In 2014 Chantel was voted Guitarist of the Year in the British Blues Awards, for the second consecutive year. She was the first female artist to win this prestigious award.

Chantel says that whilst most people are ‘lovely’ and other performers treat her with respect, she still encounters some who are really surprised because they expect girls to be ‘rubbish’ when they play guitar. ‘Would they say that to a guy!’ Chantel laughs with a tolerance I find remarkable. ‘There’s also the thing about going into guitar shops with my dad when the staff try to explain what a plectrum is – because they think girls won’t understand.. And I’m like hello I’m the one buying this…

Overall Chantel is remarkable robust in her response to sexism in the industry. ‘Whether you’re in an office or being a musician you come up against sexism and stereotypes,’ she says. ‘But for me it pushes me to be stronger and push myself further and harder. It’s a shame that we have to put up with this, but I hope in years to come when other females come through it will be easier.’

At 30, Chantel says that music takes up her entire life. ‘I feel ancient on days like this!’ she tells me, sounding remarkably enthusiastic and lively for someone who claims to be so worn out.

‘Music is definitely not a 9-5 job. I run a record label as well as performing, so my days starts with answering emails, running press and advertising and sending out publicity CDs. There’s a lot to cope with and a lot to do.’

At the Brudenell gig Chantel will be mainly performing from her 2nd album ‘Losing Control’, which she released in October 2015. ‘That album was inspired by the southern gothic scene. I did a lot of research, looking at different authors, imagery and artwork. Films and tv series. A lot of watching of True Detective – and True Blood featured heavily – it was a great excuse to watch tv. And I was listening to other musicians who had delved into that topic I’ve always been into the dark side of things that captures my imagination. There was a lot of guilt, religion, sin and the devil. Really interesting delving into that and expanding on it. Interesting – wanted to get the feeling of the deep south and how it was written and recorded and played and how it was written in the lyrics. In a way that people could associate with – with it being fiction, so it doesn’t sound phony.’

There will also be some new material performed on the 14th. ‘We’ve got an instrumental song we change every time – which varies a lot at every gig. Every gig people say have you recorded it, where can we find it … but at every gig it has a different name taking inspiration from the room or what’s happened to me during the day. Makes it hard for people to find it on You Tube,’ Chantel says

Chantel has performed at Brudenell before and loves to play in her home area of Yorkshire. ‘I want my audiences to come away feeling educated and having a great time. And absolutely aware of what women are capable of as musicians…’

In the new year Chantel will be doing some solo acoustic shows.She will be playing Korks, Otley on 24th February.