A great night was had by all who attended this showcasing event for three local bands. It also featured poetry by Meriel Malone. The evening kicked off with Meriel’s verse which was warmly received and appreciated by the friendly crowd before she introduced the first musical performers of the evening, Phillip Quinn and The Residents. This four-piece from Manchester delivered six great indie-themed tracks that were intricately and deftly played. Their pop motif was intelligent and musically varied and went down well with the Todmorden crowd.

Their first track, ‘It’s a bitch to love a hedonist’, reminded me of some of The Flaming Lips output, blended with elements of Crowded House and Squeeze. Their next track, whose title I didn’t catch, again had elements of the songwriting oeuvre of Crowded House with some picky guitar that was reminiscent of Martin Stephenson and the Daintees, for those who can remember that far back. A beautifully captivating guitar solo formed part of the track’s backbone. ‘Aeroplane’, their third track had choppy lead guitar up-front, with lovely fluid basslines behind it, with a slightly darker sound, but still a good, uplifting piece of pop that was enjoyed by all. ‘Intelligence Dirty’, their next track, had more jazzy and funky influences and was a complex passage of sound that held your attention and interest throughout.

Their last two tracks of the night continued the funky theme and harked back to the likes of Orange Juice, and Squeeze, again. There were some dreamy interludes in the penultimate track and the final tune had a great rollicking, rocking chorus that defied you not to get up and dance or join in. My overall impression was of an accomplished and well-rehearsed outfit, that are tight, rhythmic and with inventive, thoughtful songs to back it all up. They were enjoyed by the crowd and enjoyed themselves.

Next band up were the highlight of the evening for me, The Johnnie Squizzercrow Experiment, a four-piece combo. It’s always nice to see a band of varying ages and this group swept the gamut from early twenties through to early fifties from what I could tell. They were fronted by a great young female vocalist, Tamsin, who managed to combine melodic talent with urgent, tremolo-tone, punk-infused lyrics. If you’ve ever heard Polly Styrene and X-Ray Spex, then this was very reminiscent of their output, and in the same league, if you ask me, which is high praise.

They played a first track of hard driven fuzzed-up rock and reverb, that was as strong as some of the output of Siouxsie and The Banshees. Their drummer plays a great blend of insistent power drumming with attack and verve that pushes the tracks along with gusto. Underlying all this punky energy are great bass lines and understated guitar riffs and tropes that blend punk, reggae (à la Clash), indie and dub themes around original, catchy, punk-influenced songs that are noisy but easy to discern. They played a large number of tracks, most of which I didn’t catch the title of, but each was a finely honed song in the punk line, but with lovely variation in style between each one, and defining themes that meant they never became samey or predictable.

The reggae inspired moments reminded me of The Beat, and they gave us an interesting range of accompanying instruments, including a mellodion style keyboard affair played by the lead singer. One song was announced as an anti-fracking song, with the funny and apt chorus line of ‘Go Away; Fuck Off’. It might sound trite on the page, but it certainly delivered on stage. There were more jangly, indie-style interludes as well and some pieces redolent of New York New Wave era punk or post-punk, say Television, or Iggy and The Stooges. Another track reminded me of the genius that is Elvis Costello, done as well as he would do it, which I hope gives you some idea of the impression they made upon me. Above all, despite the many cadences from the past that I could hear in their songs, they were very original, incredibly entertaining, with great songs and that little something extra that is undefined, that just shouted ‘Talent’ to me. If you have never grown out of good punk-inspired music, like me, then check them out. They are all talented players, but more importantly, they know how to blend bass, guitar, rhythm and lead guitar to create something special, interesting, new-sounding and inspiring, based around cracking songs. Good luck to them.

Our last band of the evening were The Maitlands, a five-piece from Manchester with roots from around the north of England. They play a tight blend of indie-northern rock anthems that deliver high energy, but are surprisingly light and refreshing in their outlook. One of their best selling points was that they are a band who obviously like to have fun on stage and enjoy themselves, and that infectiously spread to the appreciative crowd. Their lead singer enjoys his on-stage banter and loves to interact with the crowd and make them laugh, which was achieved with ease. After a, I presume, mock badinage with his drummer, for failing to nod him in at the right moment, he laughingly scolded his fellow musician with the phrase “We’re trying to do a pop show here”. It brought the house down. It’s always nice to find a band and singer that don’t take themselves too seriously, whilst still playing decent, serious music. Airs of Half Man Half Biscuit, and the same spirit, songs of similar stature and an underlying sense that music should be fun, as well as being serious at times.

They chop and change rhythms and themes within and between songs in a very refreshing manner, almost jazz-like, or as The Doors could do on a good day. If you like The Libertines, then you’ll find much to like in their output. There were songs full of shoegazy moodiness as well and some bits of nice racket, subjected to the time and theme-change treatment. One track reminded me of The J. Geils band, despite maintaining its northern moodiness. Their lead singer has a deep rich voice, as well as a good line in comedic quips. Each of their songs was well structured, with variation, chutzpah and catchiness stitched into each song. One was focused around circling loops of squealing, high pitched guitar, and another sounded like Hawkwind playing at being indie-punks. Some songs ended abruptly, tightly, something that’s quite hard to pull off with the correct precision. There were bits of psychobilly romps, anthemic high-energy indie-fests and a final track of broken-down funk with insistent hoarse lyrics, a sort of off-the-wall funk-punk affair. They are original, interesting and highly entertaining, check them out.

It was a great night featuring three great local bands that tells us there is plenty of nascent talent and ability in our environs that deserve our support and interest. Look out for future events in a similar vein from Dark Matter Promotions. 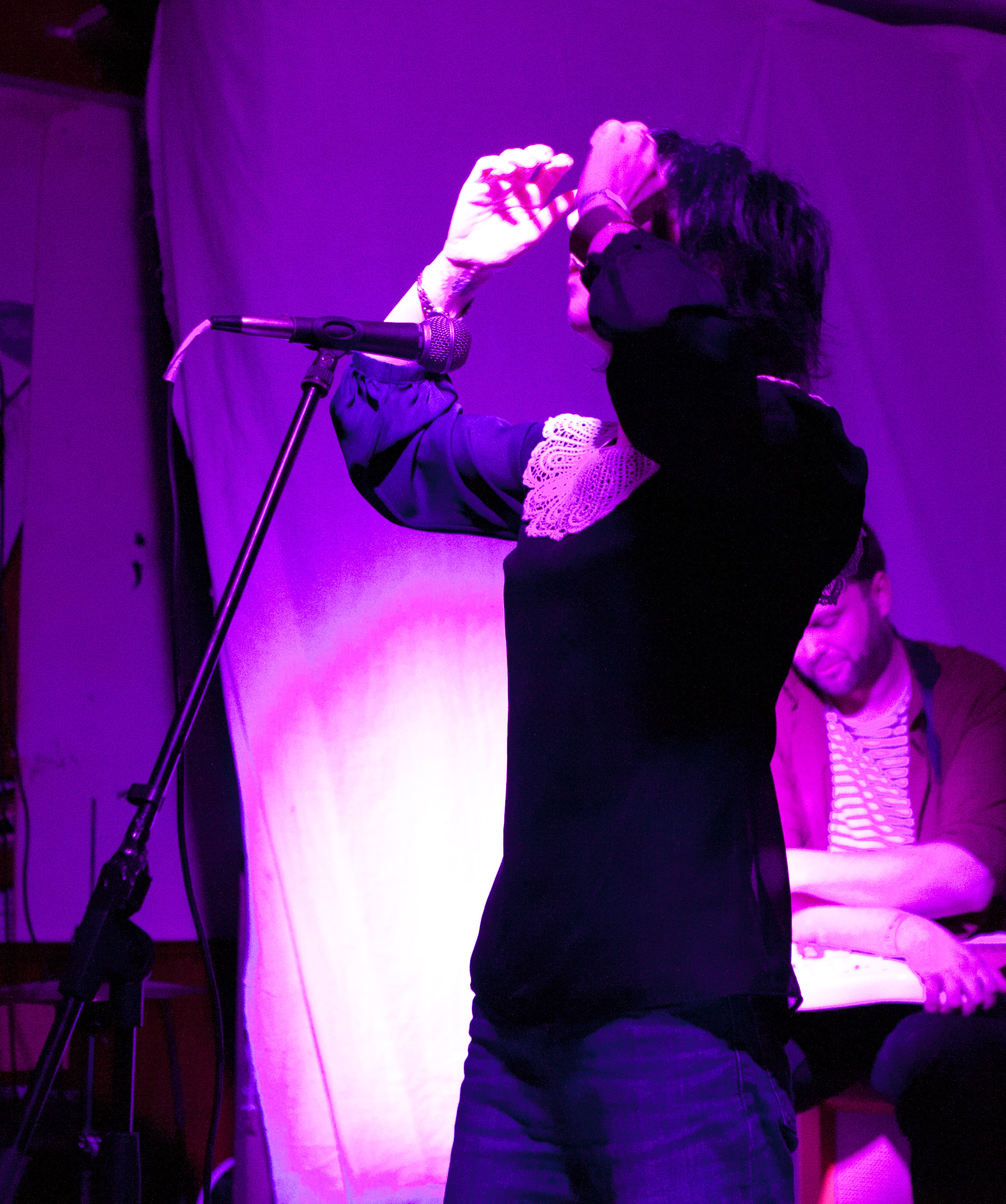 Phillip Quinn and The Residents 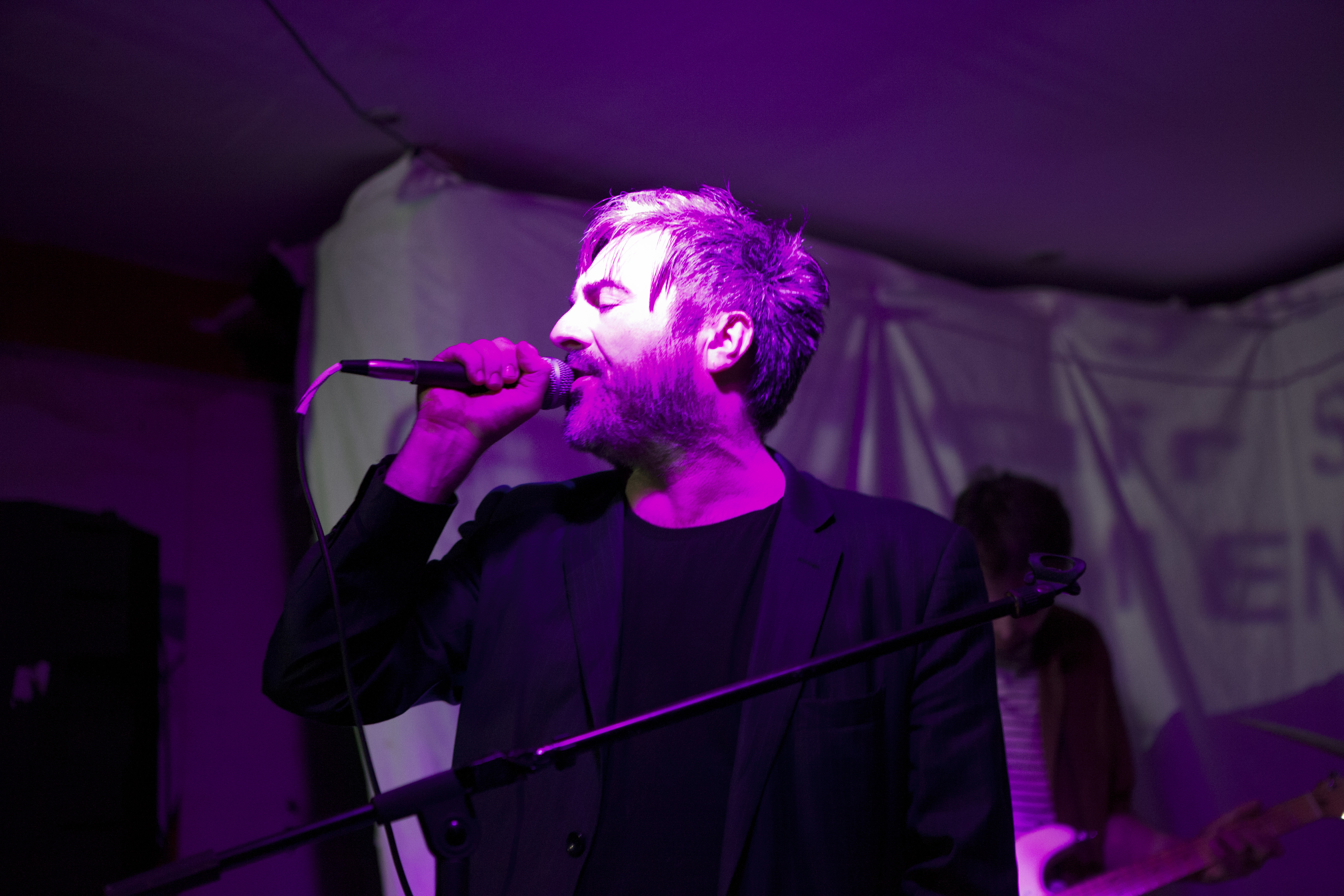 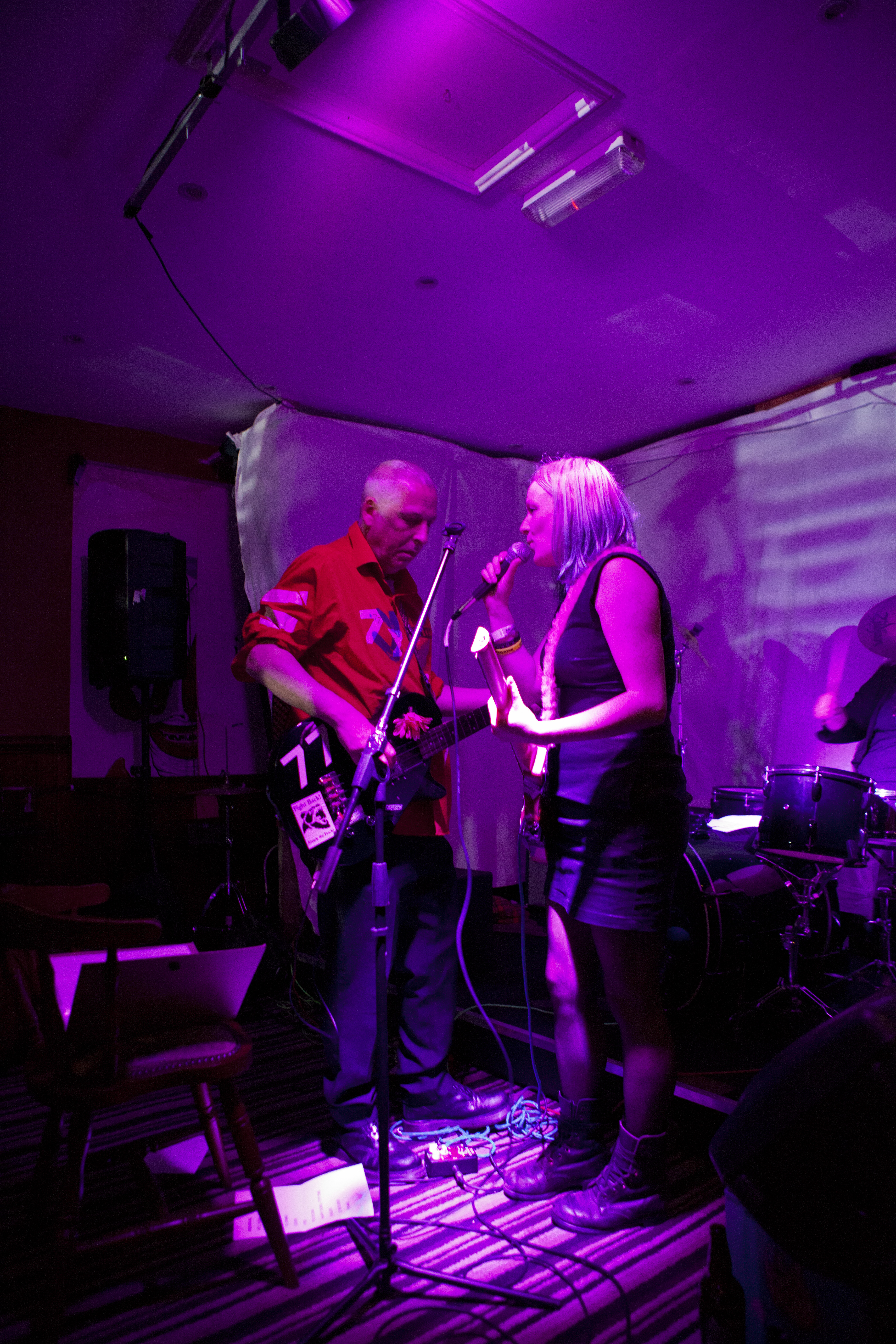 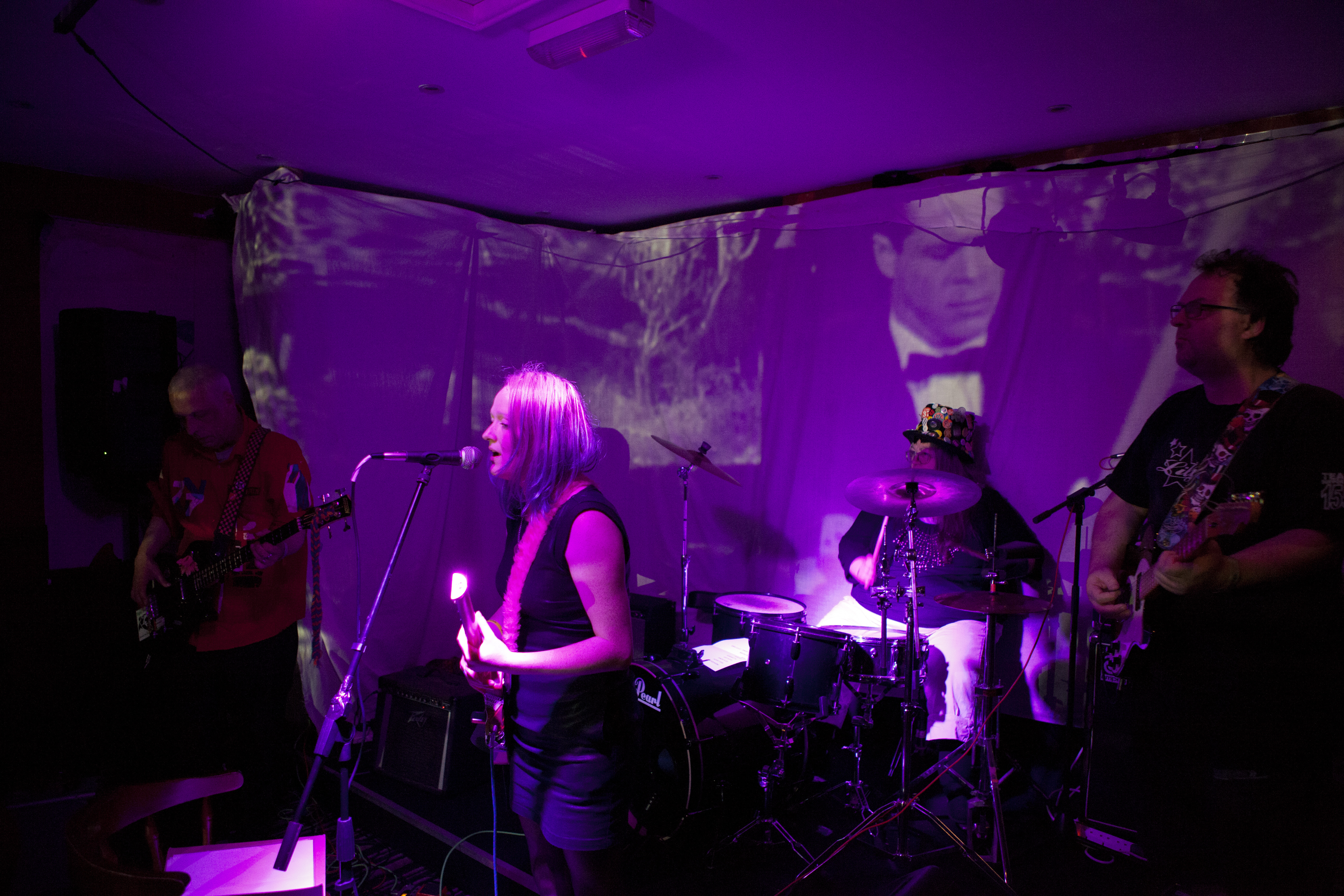 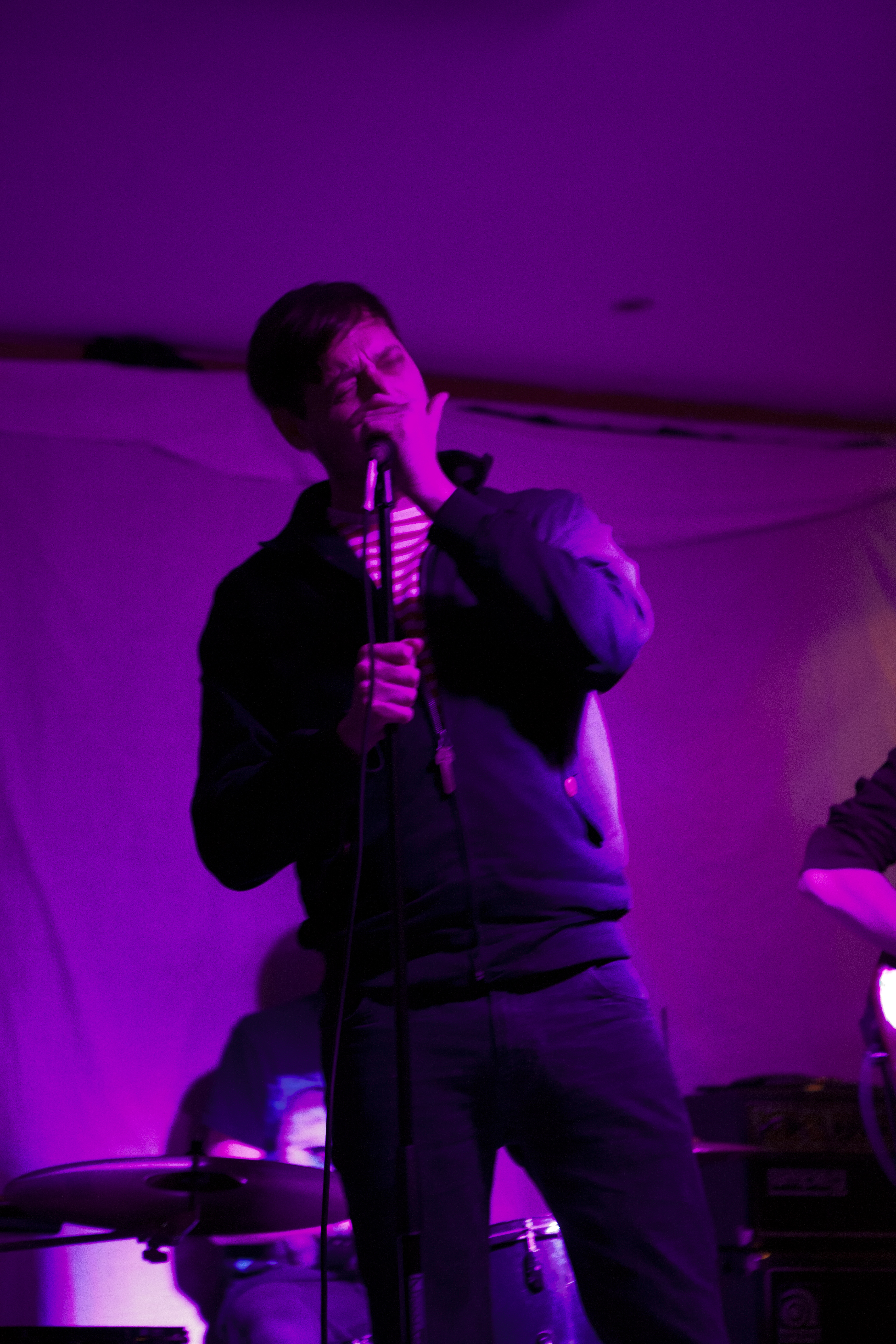 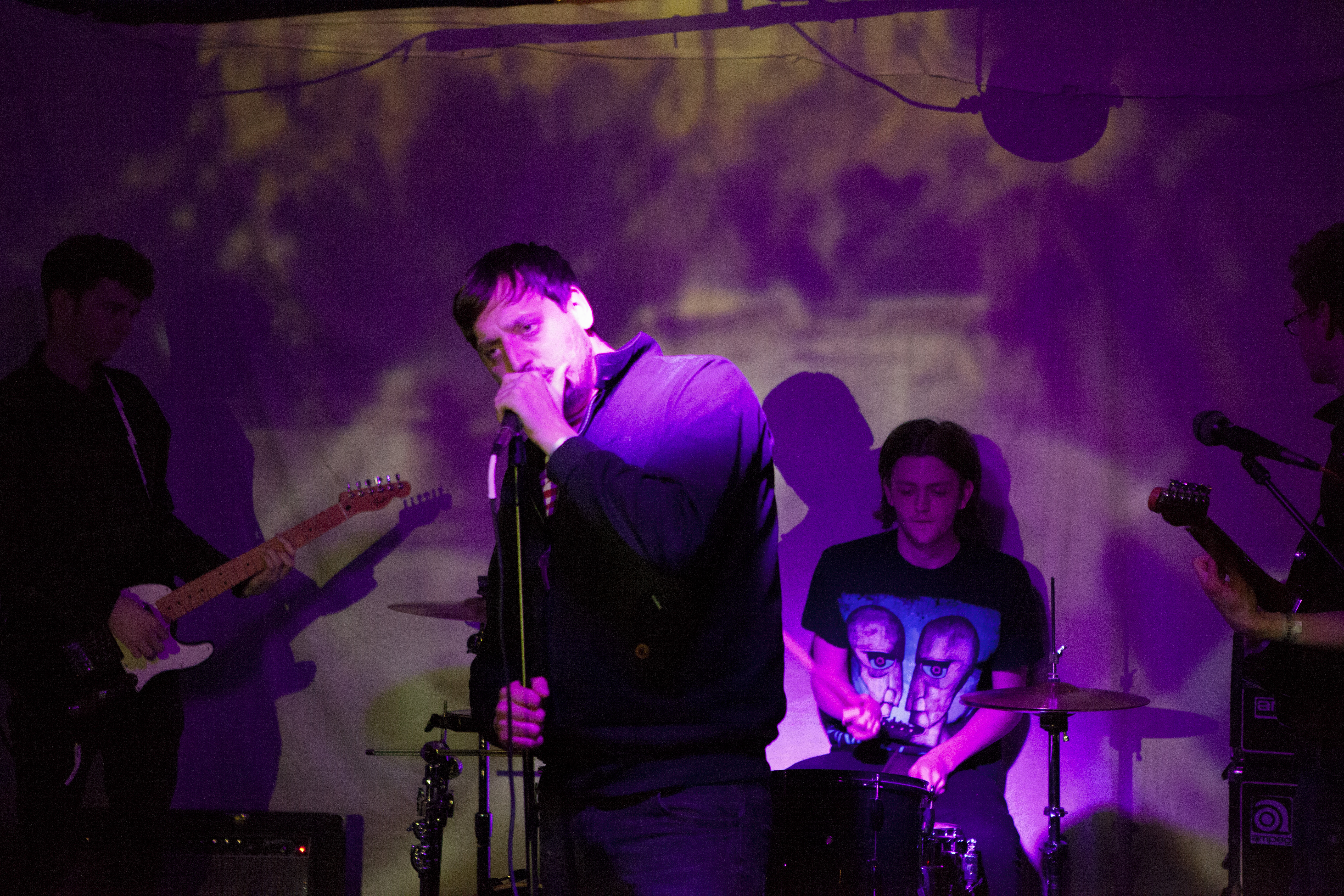 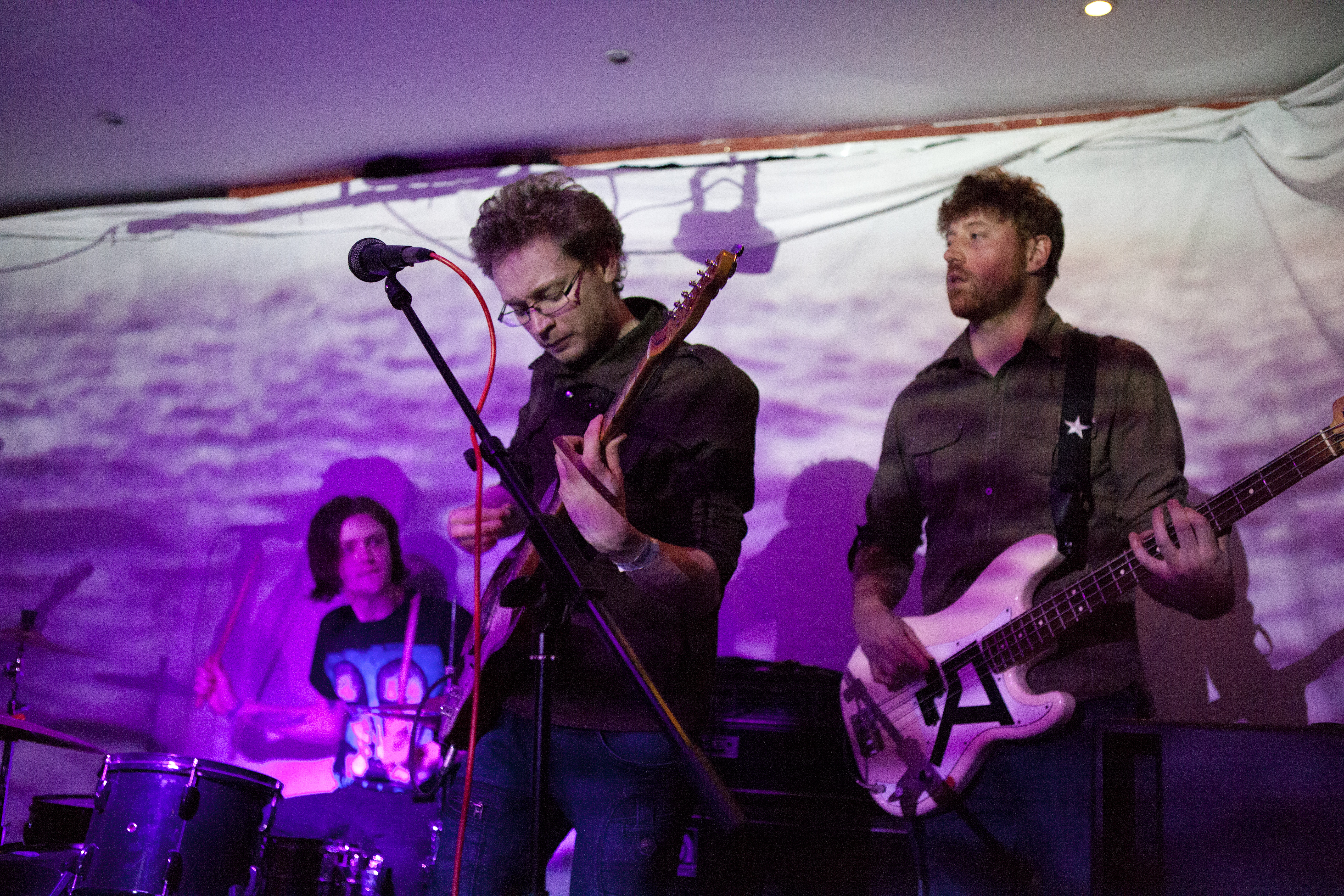