Surrounded by 16 year old girls with braces, I know I’m deep into indie pop territory. If there were any more you’d be forgiven for thinking you were at a 5SOS concert. Encircling the mostly female teenage cohort is a scattering of students, clutching drinks as the support artists play their acoustic folk ballads. Finally, at the back of Plug, a mostly student nightclub in Sheffield, stand a few middle aged fans – or more likely, parents of fans.

The first musician, Michael Cassidy, takes centre stage, armed with a guitar and a soft Glaswegian accent, and starts strumming. Songs of love, metaphorical oceans and… more love. It’s very calming, and very much folk. So too are the next supporting act, a two man band called Into The Ark. When I later ask them where they got their name, singer Dane Lloyd concisely explains: ‘two by two’, as he points to co-singer Taylor Jones. Given enough popularity, Lloyd tells me, the pair would love to get a few more band members and move towards more of a soul/reggae vibe. The south Wales duo come across as really genuine guys, and during the performance I’m mesmerised by their use of a loop pedal to create beats over their singing in harmony. If they had a banjo, you could imagine them singing Mumford and Sons songs with ease.

Finally, to raucous screams, London based quintet Eliza and the Bear take the stage. Frontman James Kellegher, with a Shoreditch worthy beard and hipster good looks, swishes his hand through his hair before the band explodes into ‘Lion’s Heart’. Their bouncy, feel good vibe is infectious and floods the room. Without stopping for breath, they seamlessly transition into ‘Light It Up’. Their lyrics are uplifting and metaphorical; “I found myself in the cold but I’m still here/ I found myself growing old but I’m still here” (repeat, three more times); perhaps a little repetitive, and interspersed with a lot of ‘oh’s, but the crowd love it.

After every song, the guitarists (Kellegher, Martin Dukelow and, on bass, Chris Brand) swap their guitars over from the impressively equipped guitar rack at the side of the stage that must contain at least a dozen guitars. Just as I begin to consider that they sound repetitive, the band start playing a song I’ve never heard before. It sounds less The Vamps and more Arcade Fire, and I like it. I can’t put my finger on what makes the song sound more mature, but it certainly does. I hope it’s a sign of things to come when the band release their debut album, ‘It Gets Cold’, on 8th March. 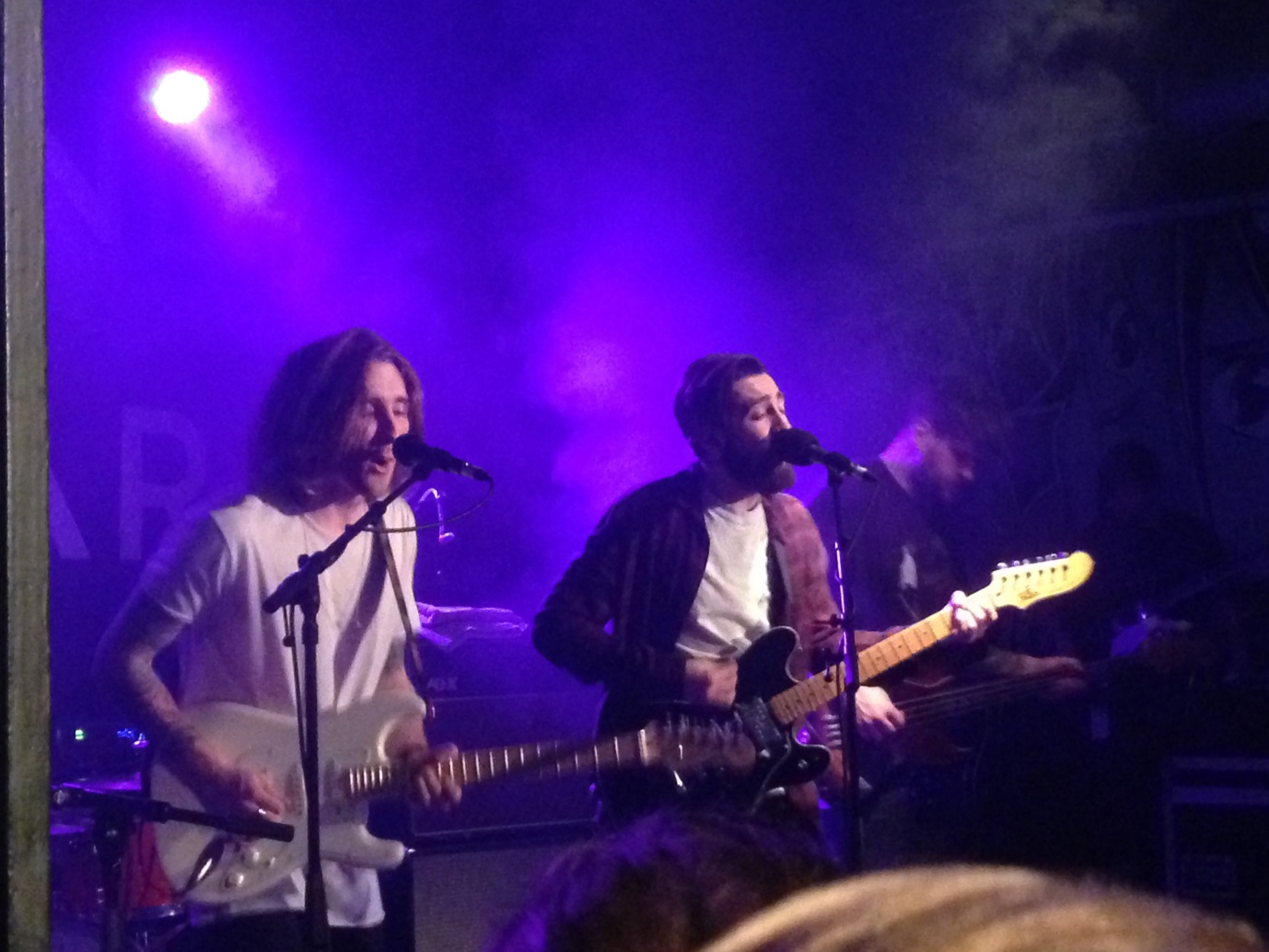 About halfway through the set, the band take a quick break to sing happy birthday to one of the fans at the front. It adds a personal touch to the evening, and everyone joins in. The next song (another I cannot name) has a slower, more solid beat, and quite an impressive guitar solo, and I feel as though we’re heading towards the end of the set – unfortunately. I want to hear more of this sound, but I’ll have to wait. It’s at this point that Kellegher confidently tells us what is to happen next. “Encores are pretentious as fuck”, he explains, going on to tell us that, instead, they would play the next song and walk off; we’d start chanting; and they would come on and play one more. We all know that’s how encores work, but at least we’re on the same page, and their matter of fact approach is refreshing. Someone near the back, in a strong northern accent, starts a chant of “Yorkshire! Yorkshire!” Kellegher looks puzzled and exclaims, “You’re shit?” Coming from London myself, I empathise with the accent barrier.

Exactly what does happen is that they play ‘Make It On My Own’ before leaving the stage, the crowd chant ‘you’re shit’, and the band enthusiastically return. I only hope no one walked in at that moment. Thoughtfully dedicating the final song of the evening to Viola Beach, a band who Kellegher and co have played with in the past, and who were tragically killed in a car crash last week, they end with ‘It Gets Cold’. Phone torches out, arms up, the crowd sing along as the drum beat halves for the final chorus. Perhaps they are a little on the cringey feel-good side, or even a little generic, but as I find myself humming the tune of Light It Up, I can’t help slightly loving Eliza and the Bear.