From rock to punk to ska, and all variations in-between, there is something for everyone. As long as that something features loud guitars and shouting. This year marks the tenth year of the festival’s existence and head promoter Ben Ray wanted to mark the occasion by returning to the original home of Slam Dunk – Millennium Square.

On arriving at the site it’s clear that the weather in Leeds is just as up for this as the queues of excited punters lining up to get in. The sun beams down on the city and thankfully stays there throughout the day. As well as the main stage in the square, the site features further stages outside the O2 Academy and opposite the Beckett University student union, as well as indoor stages within both buildings. While initially a little confusing (at least to this reviewer), once the layout has been fully investigated it’s remarkably easy to get between stages and catch all the acts you want to see.

I arrive at the Beckett student union with my trusted companion Rach, just in time to catch the end of Trash Boat’s opening set on the Fresh Blood stage. This pop-punk group from St. Albans get a great reception from the small but pumped up crowd. The audience in general at the festival are mainly young and very enthusiastic, which makes for a great turnout for every set.

From there we wander to the Desperado stage to see Patent Pending. These energetic New York pop-punks obviously have a loyal following which is demonstrated by the immediate response to singer Joe Ragosta’s call of ‘Pirate hooks up!’ Cue loads of hooked fingers raised in the air throughout the crowd as the band stomped through their hit, ‘Psycho In Love’.

It’s a short walk then to the main stage in the square to see the eagerly anticipated PVRIS (pronounced as ‘Paris’) play. The trio from Massachusetts draw a huge crowd, despite only being second on the bill. There is clearly a big buzz about the band and songs like ‘St. Patrick’ and ‘White Noise’ go down a storm. Their blend of pop-laced electronica and rock is a welcome change of pace from the punkier acts featured on the other stages. Singer, Lynn Gunn, possesses a strong and commanding voice and obviously knows how to work the crowd and her introduction to last song ‘My House’ gets a rousing cheer. Judging by the reaction to this short set, PVRIS will be headlining a stage on their next visit.

We go from there to the O2 Academy which this year houses the Monster stage, featuring some of the heavier-sounding bands on the bill. The queue for metal-core band Beartooth stretches around the side of the building and we’re lucky to make it into the venue. The sense of excitement about this band is huge and the crowd goes wild as charismatic frontman, Caleb Shomo, prowls the stage. Hailing from Ohio, the band were formed as a side project for Shomo (after he left the more electronica influenced Attack Attack! in 2012) but Beartooth quickly became his main focus. The band perform songs from their debut album ‘Disgusting’ with ferocious intensity, and tracks like ‘Beaten In Lips’ and ‘In Between’ are perfect examples of their mix of thrashing metal-core riffs and huge hook-laden choruses.

We duck out of the O2 and catch the end of ska-punk veterans Big D & The Kids Table on the Desperados stage. This hard-working Boston band adhere to a strong DIY work ethic, doing everything from producing their records to promoting their shows themselves, and have been going since 1995. They have an infectious energy to their live performance and upbeat sing-along songs like ‘Shining On’ and ‘Noise Complaint’ compliment the sunny weather. The audience dances and skanks away to the busy rhythms and parping horn section.

We head then to the small but very popular Macbeth stage to see a bit of Cartel. These pop-punks from Georgia formed in 2003 and released their wildly popular debut ‘Chroma’ in 2005. To mark the tenth anniversary of the album the band have been touring it again, so the majority of their set at Slam Dunk is made up of songs from that breakthrough release – such as ‘Honestly’ and ‘Luckie Street’ – much to the delight of the crowd.

Due to a desperate need to recharge both my phone and indeed myself, I end up witnessing Neck Deep’s highly celebrated performance on the main stage from the press room window, whilst inhaling a chicken sandwich. Despite being in a room overlooking the square and not in amongst the heaving throng, it’s very clear that this set from the Welsh melodic-hardcore quintet has made a lot of people’s day. The crowd throw their hands in the air and the security staff have their own hands busy carrying beaming crowd surfers down from behind the barrier. Singer Ben Barlow is a whirl of activity onstage whilst his bandmates play their hearts out on songs such as new single ‘Can’t Kick Up the Roots’ and crowd favourite and set-closer, ‘Losing Teeth’. Kerrang magazine’s 2014 Best British Newcomers have certainly earned their place on the main stage.

Mariachi El Bronx are up next on the Desperado stage. The Mexican folk-music playing alter ego of hardcore punk act The Bronx (who would then go on to headline the Impericon stage later in the evening) bring an entirely different sound to the night. Despite one of their members having had his snazzy mariachi uniform jacket stolen earlier, the band take the high road and play on. By turns joyful and mournful, the music inspires much swaying and dancing amongst the now slightly sunburnt and beer-filled crowd.

The recipients of the Kerrang 2013 Best Newcomer award Lower Than Atlantis take to the main stage next as the sun starts to fade and the evening approaches. This alt-rock quartet from Watford are obviously very popular and have people swarming to Millennium Square, but I’m afraid songs like ‘Emily’ and ‘English Kids In America’ do nothing for me. However, set closer ‘Here We Go’is a great tune and sounds brilliant live.

Over on the Monster stage in the O2 Academy, Californian post-hardcore stalwarts, Finch, play what seems like a nostalgic set as the crowd sing along to every word. For me though, as someone who didn’t listen to them in their heyday, they are merely an appetiser for the band who are to provide the main course tonight.

Sheffield metal-core merchants While She Sleeps are the real deal. As people shuffle into the Academy to the sound of ‘The Best Of Prince’ playing over the PA, there is a great sense of expectation. And when the band explode onstage with ‘Brainwashed’, taken from the recent album of the same name, they rise to meet that expectation. Singer Lawrence Taylor is all flailing hair and roaring vocals. Guitarists Sean Long and Mat Welsh provide razor sharp riffs as the rhythm section of Aaran Mackenzie on bass and drummer Adam Savage drive everything onwards with a furious energy. Tracks like ‘Crows’, ‘Seven Hills’ and ‘We Are alive At Night’ demonstrate the band’s ability to balance strong melodies with brutal metal delivery. The set finishes with a triumphant ‘Four Walls’ and we stumble out, ears ringing, job done. Definitely the standout performance of the day. 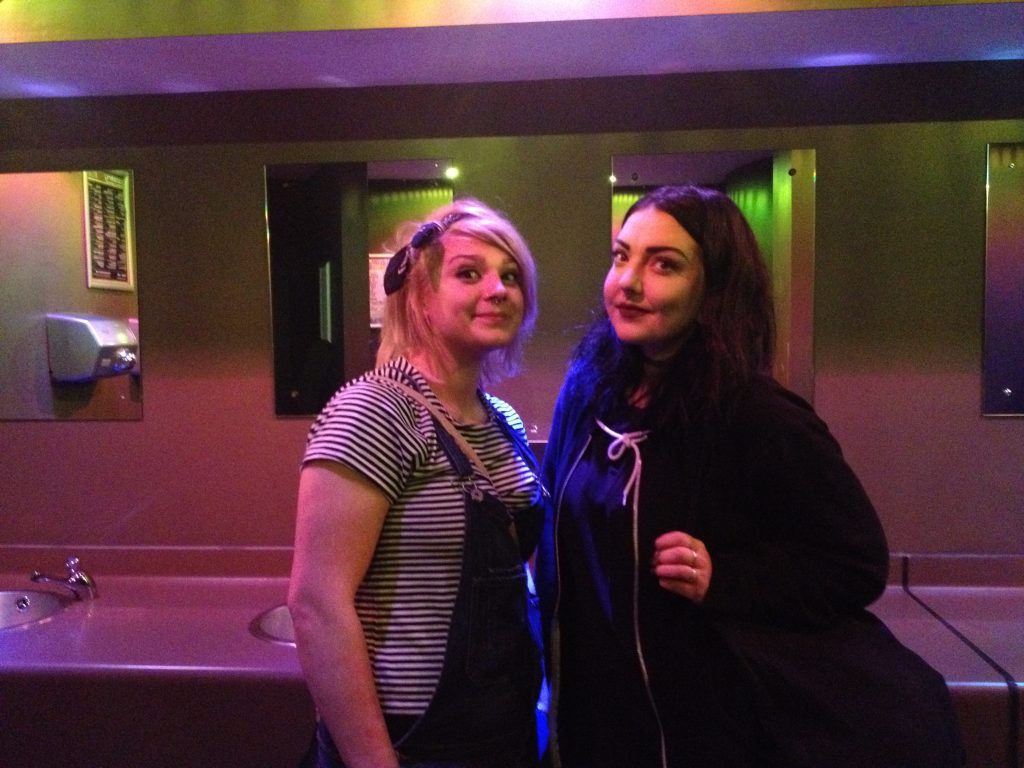 Before we leave the Academy, my companion Rachel speaks to two fellow Slam Dunkers, Miranda Mohart (left) and Beth O’Connor (right), who have spent the day at the Impericon stage in the Beckett SU. They declare that Canadian hardcore punks, Come Back Kid, were their highlight of the day, with the crowd apparently going mental for their set.

Main stage headliners, You Me At Six, close out the festival in style. The night is setting in and it’s coming to the end of a long day, but this hugely successful band are still pulling in the masses. People wander towards the square, already singing along before they even see the band onstage. Although not personally a fan of their music, I’d find it hard to argue with the crowd’s response. We can still hear the crowd singing along as we make our way to our coach home, tired but thoroughly satisfied with our day.

May there be many more Slam Dunks to come! 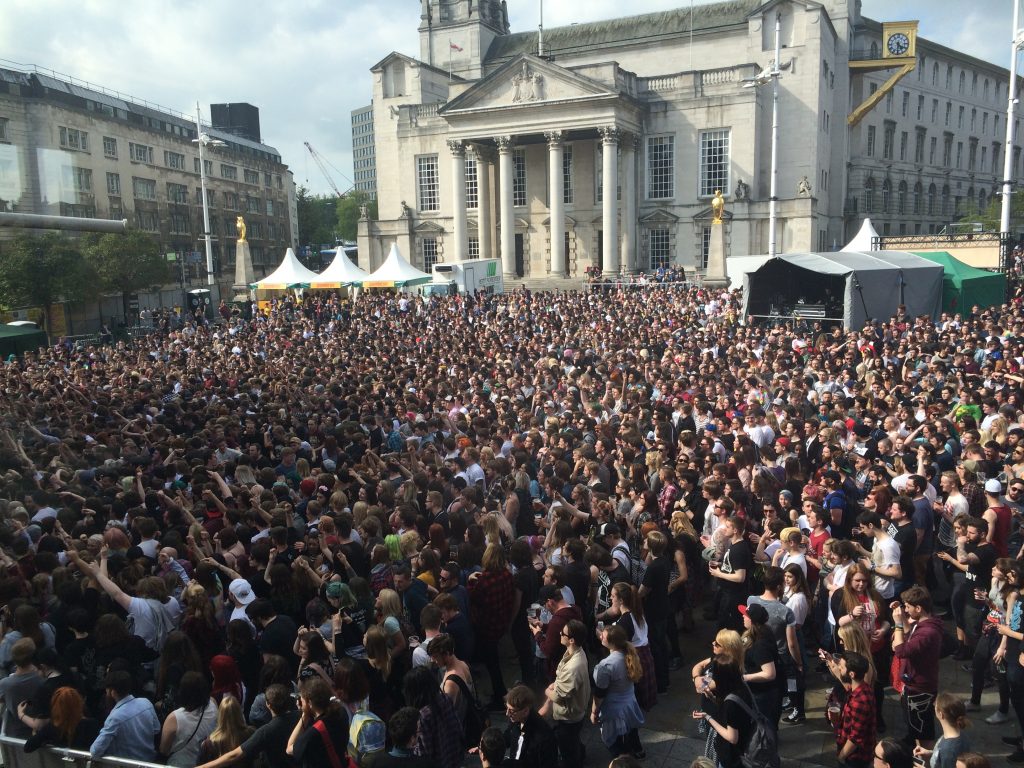 Photo Credit: All photos in this article © Martin Higgins