Rogier Smal and Cathy Heyden knocked our socks off with their exhilarating but otherwordly mixture of sax and drums. This former experimental jazz denier confesses to being hooked.

We’re all volunteers here at LSF which means we have our meetings after the ‘dayjobs’. We also have wine as well but we don’t talk about that. It was during our recent Friday evening meeting that we discovered that nobody had plans for covering Tor Booking’s evening of experimental music at the Unitarian Church, Todmorden. We like Tor because of their extremely supportive attitude towards musicians, so we agreed someone needed to attend. Despite my professed indifference to Jazz, I volunteered to go along with our photographer, Frank, to give it a go.

We arrived just in time for the last act of the night – Rogier Smal (from Amsterdam) and Cathy Heyden (from Paris). The duo were wrapped up in layers of dark fleeces as they warmed up before their set. Positioned between the pulpit and the altar and overlooked by haughty stone angels, they seemed dwarfed by the scale of the old church. The tiny audience were drinking beer and talking quietly in the pews. But when the lights went off a startling transformation occurred. As the drums and sax crashed into a gloriously discordant cacophony of sound we were pinned to our seats by the sight of Cathy, blowing her guts out, golden hair, orange shirt and saxophone gleaming out of the blackness.

There’s an unmistakable passion and energy in this performance that’s hard to resist. The pair respond to each other’s playing with a skill and fluidity even a jazz novice has to admire. Rogier in his woolly hat holds his drumsticks light as sacred objects, but is giving it all that he’s got. Cathy skilfully holds a note as she swings and sways on the spot – but then begins a slow confident march along the darkened nave of the church, leaving the audience far behind her. There’s a thrill of expectation as she vanishes, playing, into the darkness at the far end but then reappears in one of the aisles, lit only by the glow of her saxophone. 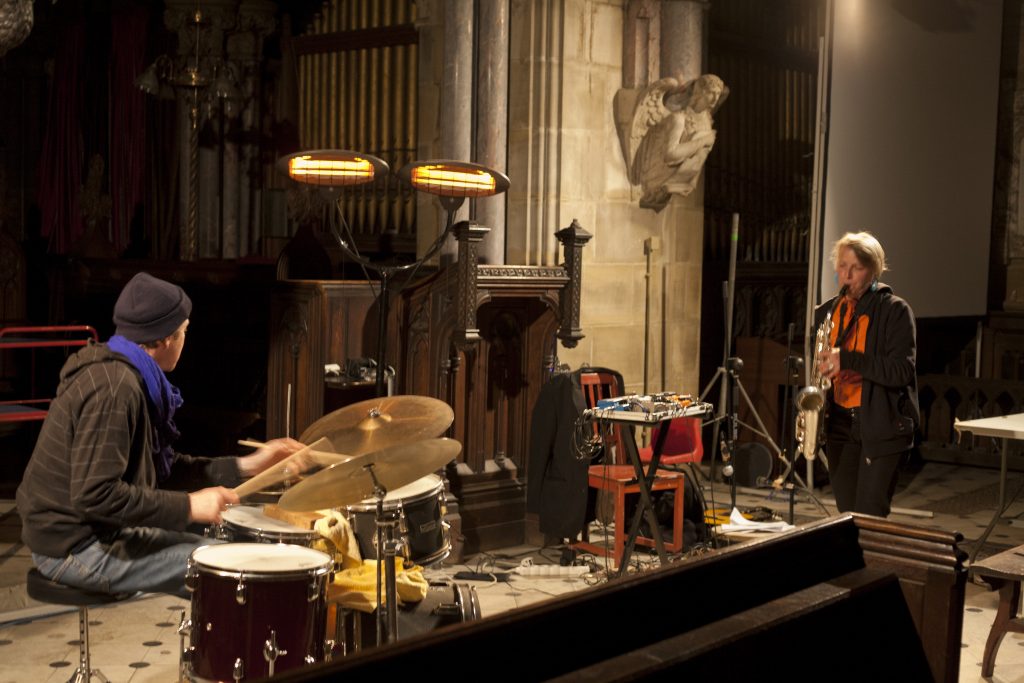 Between first and second tracks the couple mumble something we can’t hear, but there’s no mistaking the start of the second track. It’s the kind of drumroll you’d expect at the start of a Cecil B. DeMille, movie – the one with the parting of the red sea and people charging around in chariots – and what follows musically is certainly fast and furious. But after a while the mood changes and the track fades out into a eerie assortment of sounds created by the sax through FX.

The following track is almost militaristic at the start and Cathy has her saxophone raised above her head. There’s plenty of high hat sounds from the drumkit and as Cathy adjusts the FX we are riveted by noises that are weird, spooky and thrilling. Rogier is bent low over the drumkit and now Cathy has vanished from view. The mood shifts again and we have glorious liquescent sounds that transforms the darkened church into the bottom of an ocean. Then there’s a wash of eerie reverb and a plock-plock noise we cannot identify. Nobody moves a muscle as the sounds gradually fade back into silence.

We had to leave after that, but we tiptoe away entranced and energised. This isn’t mellow jazz but shock-you-from-your-socks-upwards, hammer-inside-your-ribcage stuff played by talented and dedicated artists. This definitely wasn’t my normal kind of music but this performance was vibrant, unsettling and mesmerising. Some people might find it a touch on the pretentious side, but with half a bottle of wine inside her, this reviewer was utterly captivated.