Before I dive into the review I want you to imagine something. I got an email from Sam, the drummer from DENSE, (yes those purveyors of noisey noisey sound) saying he was in another band, and would I like to review their first single. He then told me it was a nine piece jazz/funk/soul group. What I want you to imagine is the look of utter surprise on my face, the look of mind-blown confusion.

That feeling of surprise and confusion was wiped away in the opening seconds of ‘Wondering How’ as it oozed seductively from the speakers, and started to weave it’s magical sound around my ears and head. This song does all of the jazz, funk and soul things. It does it in the smoothest way. With the sweetest vocals. With a lovely sax solo that is joined by flute (yes, flute people). It even has what we might describe as a slightly psychedelic souly jazzy section that somehow has me in mind of Pigbag or the smoother material from Rip, Rig & Panic (now there’s a blast from the past).

Sounds dart at you, there’s a sax there, drums that are cool, inventive and sparse, and it grooves to die for. The problem with this single is that there’s nothing I can point to that might have been better. I can’t even complaint that it ends way too soon, it lasts a fantastically long 4 1/2 minutes. It’s clear that these are nine people who know their stuff musically, you can’t fault the playing. And the feel of this thing, the way it makes you feel, is great, although it grooves hard it’s smooth, it’s soothing.

Yes, you could fit Mondo Bizarre into that Neo-Soul niche but you’d have to shove hard to get it to fit, it’s soul and funk but the jazz element is to the fore. With that flute going it reminds me of jazz my dad used to play to me when I was around five or six. This makes it sound retro and in some ways it is, but in others not, it’s very much of now.

For a debut single this is incredibly impressive stuff. It’s beautiful, really beautiful and about as close to perfect as I’ve heard in a long time. I’m completely blown away by this. This thing is cool, way way cool. It deserves that you listen to it, you must listen to it. 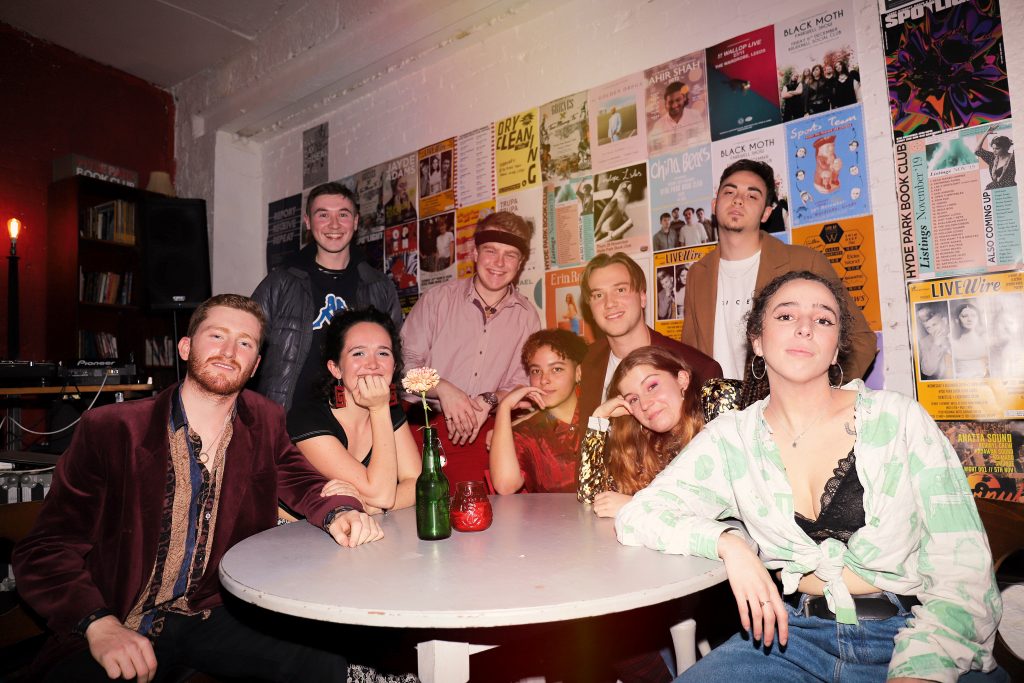 Only 12 months have passed since Leeds group Mondo Bizarre first started performing their otherworldly, danceably –infectious neo-soul/jazz-funk fusion music to an eager audience at the Brudenell Social Club. However, since being asked back to headline the very same venue just 2 months later as well as other prestigious Leeds venues such as a headline set at ‘Belgrave Music Hall’ and performances at ‘The Wardrobe’ and ‘Hyde Park Book Club’, it feels like a lifetime to have waited so long to hear the band on record.

Speaking about the inspiration behind the track’s lyrics, Bella says: “jealousy isn’t an emotion I often revel in. However if I was to envy anyone, it would be that person we are all familiar with; that person who no matter what life might throw at them, seems consistently unaffected and optimistic.  This song is about them, asking them to share some of the light they carry with the rest of us.”

Having met at University through a mutual love of all types of music whilst coming from all different walks of life, the very cornerstone of Mondo Bizarre is to provide danceable and inclusive music for everyone to enjoy. Everybody is welcome to the Mondo Bizarre party.

With this in mind, the band have decided to throw their very own single launch party in collaboration with Not Quite Ripe Records and 0800 DISCO, at Blueberry Hill Studios on 11th December (details below). The band promise this to be the party of the year and given the hype ‘Mondo Bizarre’ have made for themselves over the last 12 months, it has a very good chance of being just that.

In collaboration with Not Quite Ripe Records + 0800 DISCO