Sometimes I’m lucky I have space to listen to, and review, bands that don’t come from Yorkshire. And I was bloody lucky I had that time when I got contacted by The Novus who come out of the Midlands.

If you’ve been keeping up you’ll know I have something of a thing about bloody raucous rock, and that’s what The Novus do. It’s an unholy mix of alt-rock, Brit-pop, somewhat hard RnB-ish, slightly punky, slightly psychy played with the kind of energy that fizzes, actually it does more than fizz, it explodes.

Pounding drums, guitars that sound raw and unfiltered, vocals that positively rock, played at a speed that exhilarates. It is the sound of the best of times, it has a madness that takes you over the edge.

The song may need some explanation, here that from the band, ‘We wrote this song in the van on the way home after we came down from Stourbridge to play a gig in Camden and saw this old guy (in his underpants when we saw him) dancing his heart out by the bridge at Camden Lock and apparently he’s been doing it for years’.

And the song reflects that, it makes you want to dance until you collapse, put it again, collapse again, repeat until you just can’t do it anymore.

This single comes with a bonus in the shape of ‘Castaway’. This is described as a ‘Live Lockdown Demo’ but it sounds pretty much fully formed to me. My helpful friend, after some repeated listening, described this as ‘sounding like a cross between Goth and 70s’ Psychedelic Rock’, I agree. I’d further refine that by adding that the Gothy bits sound a bit The Cult-ish. You get the idea that this is dark, guitars are spike-y, vocals echo, bass is ominous. It’s fucking brilliant.

Boy am I happy I had time to listen to the single when the band sent it through. This is music to take you to a good good place. It fucking rocks, go listen. 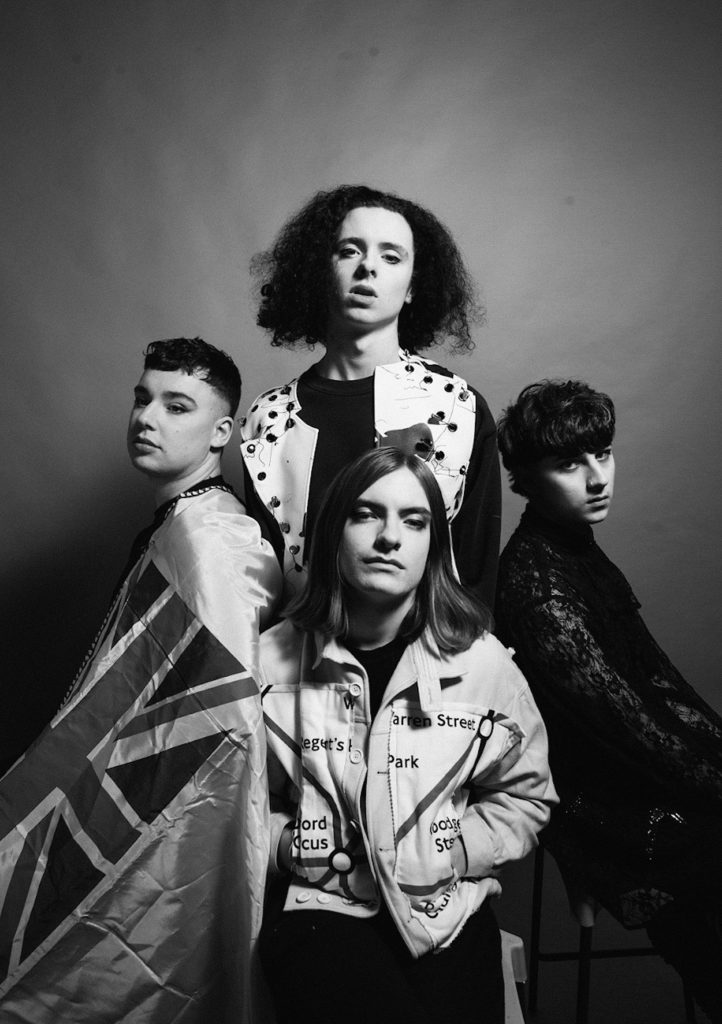 Having been described as the most powerful thing to come out of Birmingham since the industrial steam-engine, The Novus lead the Gen-Z charge fuelled by council-estate angst & longing for escape from small-town mentalities with their bigger-picture ideologies.
Impossible to put in a box, The Novus extract influence from all areas – from 70s psychedelic rock to contemporary post-punk & are obsessed with every aspect of the eternal realm we call ‘art’.

They are renowned for their raucous DIY live-shows, in unusual & often secret locations. The Novus have found recent successes with a UK/EU tour & receiving backing from the likes of BBC Radio 1, Radio X, DIY etc.

Band shot at while filming the video

The Novus, like many bands and artists are discovering novel ways to make distanced videos during lockdown and had to be creative when considering what to put together for this single. The song is based on a man who can be seen regularly dancing at Camden Lock, who the band spotted when in London for a gig.

They found footage of the actual man on YouTube and approached the Czech film maker who filmed it who gave permission and put a shout out on the Idles AF Gang Facebook group to find an editor. All that was needed was some footage of the band to include.

” it was a complete shock to us. We were trying to stick to social distancing guidelines with Tyla filming me at a distance and exploring rural Stourbridge for something resembling a bridge that contrasted to the Camden setting. We stepped off what we thought was a public footpath into some fields and then heard an almighty ‘crack’. We thought it was a car backfiring back on the road or might have been an air rifle, then the second bang which was a lot louder and saw something rattle the leaves of a tree. We thought shit! and legged it as fast as we could as it looked like a ‘get off my land’ episode that might have escalated”

In the final video the shot going into the second verse where Connor is furthest away in the field, you can see his head turn after hearing the first shot. That shot shot!