I love VENUS GRRRLS… Sorry I need to take a moment here to admit that to my eternal shame I failed to note the moment when they changed from being VENUS to being VENUS GRRRLS. Sometimes my finger isn’t as on the pulse as I’d like it to be.

Anyway back to what I was saying. I love VENUS GRRRLS, their music is fierce and their songs make me think, I respond emotionally to their music; basically the full package I look for in a band or artist.

What I’m going to say right here, and right now, is that this song bloody fucking rocks. It musically kicks arse, multiple arses. It has just the right amount of Goth sound in there to fit the song’s topic without going over the top. The playing is out there, way out there.

I’ve said that there because it’s likely that I may go off on all sorts of tangents now. The song struck a nerve, I relate to the topic. It made me think.

The song is a story, GK says ‘Goth Girl is most definitely a story, there is a running order to it. It begins painting a picture of two friends hanging out, who eventually realise their struggles for their choice of clothes and makeup’.

Now, I’ve said this before but it bears repeating, I was a Goth back in the day, or rather I should say I was into Goth in a big way. This was when ‘Goth’ was just one type of post-punk music. Visually I trod a fine line between Hippie, Metalhead and Goth; if you can imagine that.

Sorry, a tangential question – do you ever really stop being a Goth?

The early 80s was not a good time to be ‘non-normal’ or non-conformist’ and I suffered from a great deal of abuse – mainly verbal, although I was thrown into a hedge on a couple of occasions – when in mainly Goth mode. Now I’m not saying that Goths don’t get that now, they do. And the same assumptions about Goths are still being made – ‘you’re a Satan worshipper’, ‘you’re into witchcraft’, you know the sort of thing.

Time passed and I gradually moved away from the ‘Goth Scene’ – adult life gets in the way you know. I kinda kept in touch with it, and then I started to notice stuff – the way the Goth look got commercialised, the mainstreaming of the sexualisation of female Goths. This came to a head when I visited Whitby during the Goth Weekend a few years back. There were what seemed like hundreds of male photographers swarming around; look I may be exaggerating here in terms of numbers. But the thing is that these were people who were there just to take pictures of the female Goths. Just the sort of people who insulted me back in the day. I was sickened.

And I started to notice that people who clearly were not Goths in the full sense of the word were adopting the Goth look. Goth had become a style choice, rather than a lifestyle choice. I was both saddened by this and, to be honest, slightly jealous that it had become acceptable to ‘look like that’, be like that.

The song addresses all of this, GK says ‘t I quickly began to think about the strange and unique stereotypes people associate with alt/goth people. There are still struggles and strange interpretations of counter-culture, e.g. Witches/Goths ‘hexing’ people, but currently Goth has come more into fashion than it used to be, which is fine. Albeit, I imagine it to be difficult for those who were treated unfairly in the past to accept this, just because something was less socially acceptable at the time’.

If you’ve ‘studied’ the band’s songs this is something you’ll notice; the theme and the words are thought through. The songs are multi-faceted – they go from the personal to the societal, they address the issues raised by the personal.

Before I go on I want to thank GK who put up with the meandering thoughts of an aging Goth and answered my rather badly put questions and comments about the song in some late-ish night emails. Her answers really helped me get my thoughts for this review into some sort of order. 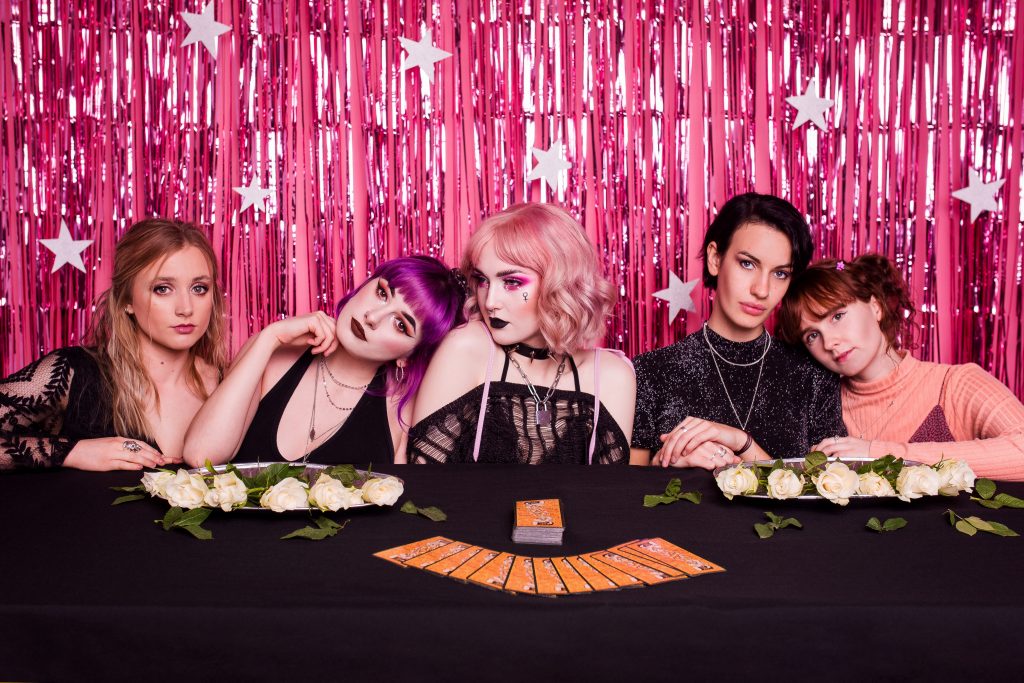 So this isn’t just a kick-arse song, it’s a song about something, something that makes you think, and in my case think a lot. And although it’s about one particular kind of ‘tribe’, extending the thoughts in the song to others isn’t a huge step. And that should make you think hard about some of the stereotypes you hold.

I’ve seen reviews of this song that say ‘this song cements VENUS GRRRLS’ position in alt music’ or something like that. I disagree, this release is another step up in their continuing mighty rise. It’s a big step up. but then again we should be used to them taking a big step up with each release, shouldn’t we? That position was cemented a long time ago, where have you been people?