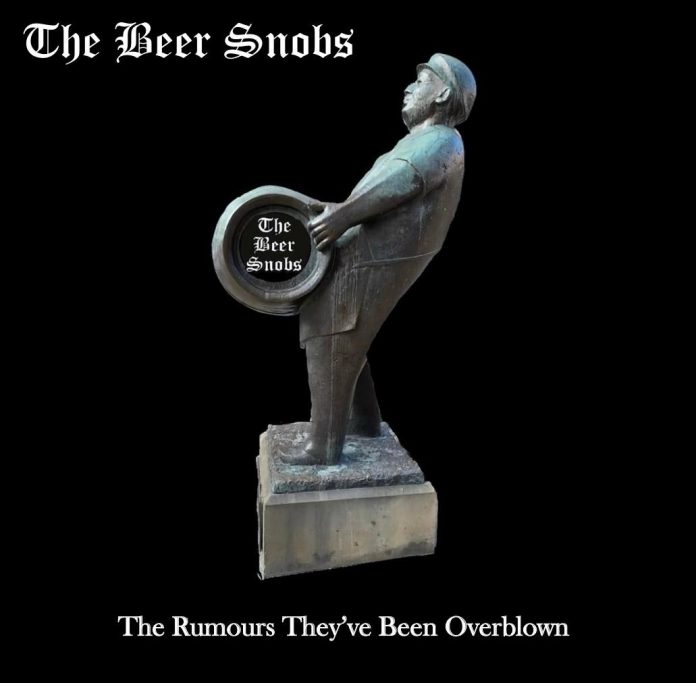 My first encounter with The Beer Snobs was reviewing their last single release – ‘I’m A Terrible Liar’ – and a fine song it is too. A whole album’s worth of their music seemed to me to be a fine, fine thing. Let’s dive in, friends.

Opening song ‘Dusk Til Dawn’ does not disappoint. It has a tune that is earwormy to the extreme. How I have to address something tricky here; this is what it sounds like. Well firstly the song features whistling, one of The Beer Snobs musical trademarks. It sounds broadly like folky punk pathetique with something of Otway & Barrett thrown in for good music – strummed guitar, a fab bassline and sparse drums. This is until the chorus where it suddenly blooms into 60s’ pop. So musically this is a winner but there’s more. The thing about the band is the lyrics; the words tell a story, so listen closely.

‘Town Street Special’ is a change in mood musically. It veers towards something I’m calling lo-fi diy in a kind of upbeat 60s’ pop way. With, by the way, a great lead vocal. This is until, in a seemingly random, but brilliant way, it revs up at the end into a raucous almost Lynyrd Skynyrd guitar freakout. What doesn’t change is that this is a song about something, the words tell a story.

Look I’m almost at the limit of defining the sound of these songs, but I’ll try. ‘Just Can’t Put My Finger On It’ sounds strangely like a cross between early REM, The Buzzcocks and the Beatles. But this isn’t the point, the point is that it’s a blast of a song. Great words tumble over you, bringing a smile to your face.

The sound of ‘Pet Shop Cunt’ brings to mind something post-punk – it’s dark, you get me. And yes, the band’s take on that post-punk is diy but it’s genuinely absolutely fucking brilliant.

Next up is ‘I’m A Terrible Liar’ so go here to review my review. Mind you come back, hit the back button once you’ve read it, OK.

‘Tied Down’ is kinda Americana in some ways but it’s played at Buzzcocks’s speed. Like some of their other songs it seems to be about the life of the ordinary person. ‘The Duchess’ returns to that amped up diy 60s’ sound. It actually seems to be a song a song about the Duchess of York. I’ll leave that here.

Bloody hell, the band shifts into The Animals’ R’n’B for ‘Girl With The Flaxen Hair’. It seems to be a straight take on the story of a girl who leaves, gets married, and the narrator wishes she remembers him. It features the trademark whistle. It also features a groove and a bassline that positively insists you get up, get down and shake your body into a frugging frenzy.

‘Something’s Got A Hold On…’ is a rattling pop song. But without really knowing what it’s about I suddenly find myself emotionally moved. It has this heartfelt thing going on. I don’t know, my heart gets the song, but my head doesn’t.

And all too soon we get to the closing track ‘Atomic’. Now this, I kinda expected it to be a protest song but it isn’t. It’s a song about chemistry and why you should have listened during chemistry at school. The reason being Pointless. Look, I kid you not. It’s brilliant, funny, weirdly singalong, and has a spoken word outro that literally made me spit out what was a very good mouthful of tea. A joy.

This album has it all. Musically and lyrically. Yes, The Beer Snobs do their own thing but they do so bloody brilliantly. They kinda have that archness of The Bonzo Dog Doo Dah Band ‘doing’ various styles of music but like them their songs are sometimes humorous, sometimes about the lives of the average person in the street, and sometimes their songs seem to be about one thing and then something else. And then again sometimes they are a pure, simple and raw blast.

The thing that comes through as you listen to this album – and this won’t be once, this is addictive – is the joy of the music, the obviously wonderful words. And it’s these which make it so good. Actually it’s beyond good, it’s fucking wonderful. So make this part of your life right now.

The Beer Snobs are: