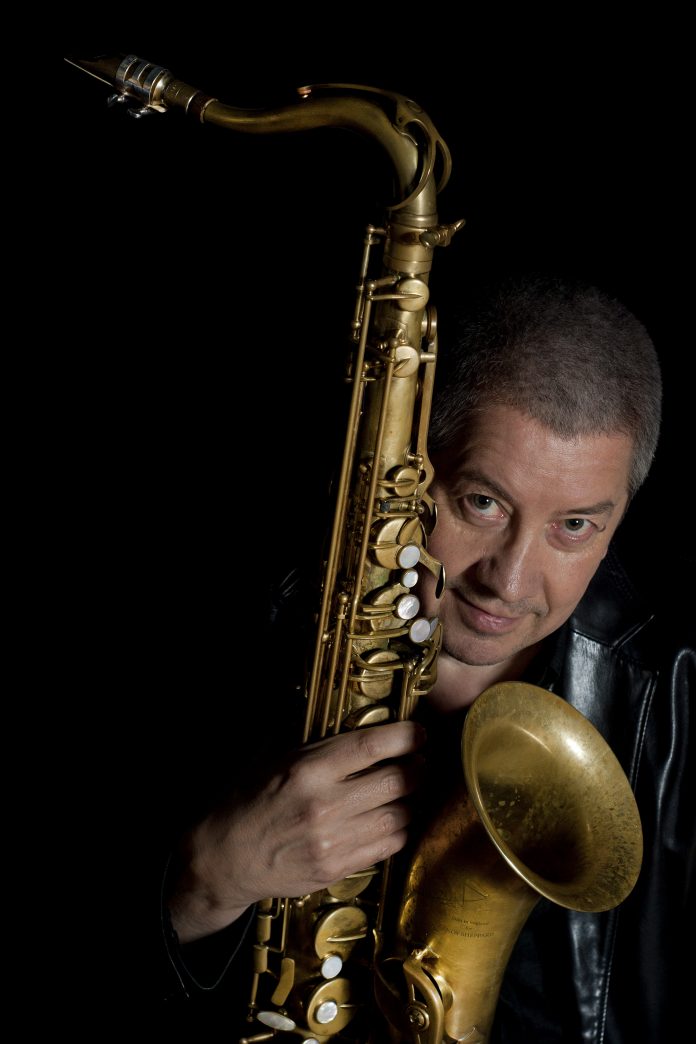 Andy Sheppard, as one of a very few British jazz musicians to have received international acclaim, was awaited with reverent excitement at a packed Band on the Wall. I attended expecting to be treated to some classy music and impressed by some fine jazz blowing. In the event, I was charmed into a world of unexpected gentleness and left haunted for days afterwards by the delicate beauty of the music. Playing tenor and soprano saxes, instruments on which prodigious standards have already been set, Sheppard has not only earned his spurs as a player, but also established himself as a composer of a large and varied range of music and shown himself to be an innovative bandleader.

The night brought a couple of unusual covers, notably ‘River Man’ by Nick Drake, but the tunes were principally taken from Sheppard’s new album ‘Surrounded by Sea’, and the style was mostly reflective, slow and lyrical. The audience was drawn into gospel like ballads, the sax coaxing the band into lengthy musings that suggested rather than stated themes. There were few heads and middles or conventional harmonic sequences, but rather the effect relied on intense improvisations between the four musicians; virtuosic but without blistering solos. There were build ups to louder and more dramatic rhythmic passages, and times where the sax became strident – the drums and guitar agitated, or the bass figures scurrying – but the predominant mood was one of compelling softness. It may have been rather too soporific for some tastes, but it was never affectedly obscure, and it was in fact, just as other reviews had said, quite beautiful in places.

Sheppard’s full and distinctive tenor and soprano tones took a central role in the sound, but Michel Benita on bass picked out countermelodies and shaped harmonies underneath. He produced trance like growls using a bow, melodic work from the high fretboard and ringing harmonics too. The guitar, in the sorcerer’s hands of Eivind Aarset, became more of a textural than a lead instrument, as he conjured up a whole spectrum of colour. Using two feet on pedals and a free hand to shape – by means of electronics – the sounds he sustained with left hand fingerings, Aarset became a string section, a skirling bagpipe band or doubled as a keyboard player. With similar creative imagination, Michele Rabbia on drums and percussion sketched in rhythm tracks using a choice selection of hand chimes, rattles, voice synth work and even a plastic bag to surprising effect. On the kit he used hands, sticks and an interesting selection of brushes, including some that looked like long floppy fingers which he used to stroke the drums and cymbals with.

The band’s intensity was impressive in a way which noisy firework displays never are – the musicians interacted with rapt attention to each other, the roles of rhythm section and front line being abolished in favour of all voices being heard. Sheppard’s role in this was as a kind of shaman-like figure. My favourite part of his playing was when the band paused to give him the spotlight: there followed a breathy passage of intricate arpeggios which thinned and slowed to long, thoughtful phrases and silences. As he leaned in and out towards the mike (as if to share confidences with the audience) the volume dropped to little more than a sigh and he gradually incorporated a squeaky floorboard into the amplified sound. A moment of humorous intimacy.