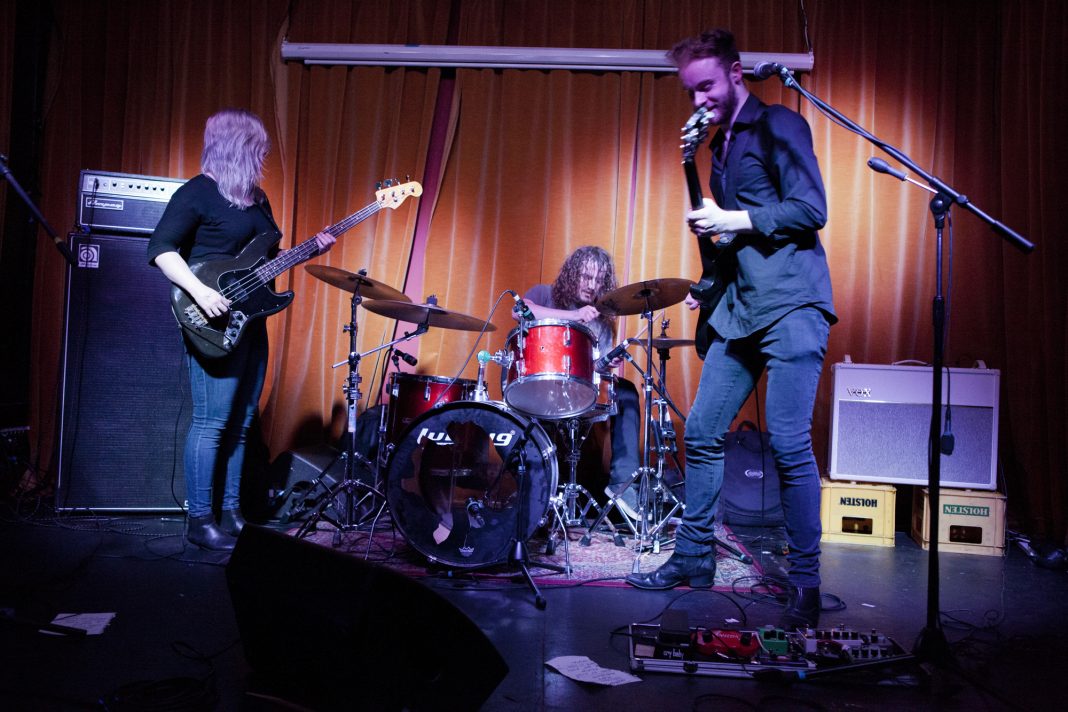 Just before their set the two members of Duke Mercury – Connor (vocals/drums) and Liam (vocals/guitar) – strip for action. This gave an impression to me that they were likely to be more Hyena Kill than White Stripes. How wrong I was, While there is ‘riffage’ there’s also nuance and complexity.

Not having seen or heard them before (note to self – remember to check out band Facebook Pages for music before going to gigs) my notes made during the gig read like the strangest ‘if you like X, you’ll like this’ I’ve ever seen. White Stripes, jazz, math-rock, Zappa, topped off by Placebo vocals – I scribbled them all down while listening. While this may seem like a bit of a mish-mash, the music produced by this duo is engaging and exciting.

Duke Mercury can be loud – and they are very loud when they’re loud, they make a hell of a lot of noise for a two-piece – but, as I’ve said, they can also be quiet and complex. These quieter sections give us a chance to concentrate on Connor’s drumming which is really ‘musical’ and inventive.

If I have to be objective – and we try to be objective as reviewers – some of the ‘in song’ rhythm changes were a little awkward but some of these seemed to be down to technical issues. With my subjective music fan head on, I didn’t find these at all jarring and they didn’t really detract from the overall feel.

I really liked Duke Mercury and hope to see them again in the future. If they’re playing near you I’d recommend checking them out.

I didn’t really get Mums until their second track. During their first track I was thinking “this is just a loud noise, not sure I like this at all”. Once I’d calmed down and just let it wash over me, I got them. Their own Facebook Page describes them as ‘noise-rock’ and yes, their sound is like a wall of extremely loud sound hitting you repeatedly in the ears, but in a nice way. I got these hints of swampy blues in a couple of tracks and there was an almost acid-rock style freakout at one point. So it isn’t just noise, it’s very definitely music, there are tunes. Honest.

One key thing in Mums’ sound is Roanne’s guitar which provides the highlights by lifting it. It’s not a ‘lead guitar’ as such – she certainly doesn’t do that lead guitarist posing stuff, although she does have a nice line in quizzical looks – it’s subtle, it’s clever. The other key thing is that this band are a unit: when they play they are locked together. If they weren’t it would be just mess.

I could easily have listened to another hour of Mums, I liked them that much. Again, catch them if you can.

I’m a bit of a fan of False Advertising and this was the first time I’d seen them in such a small venue, so I put my ‘reviewer head’ to one side for their set. They opened with their new single ‘Alopecia’ (taken from their forthcoming EP) and a fine song it is too (do check it out on Soundcloud).

There’s other songs from the new EP in the set and they are sounding good. There’s that Jen and Chris switching instruments thing as usual but it comes with banter, Jen tells us that “it’s that moment when they hope Chris doesn’t spend too long tuning up” (he doesn’t by the way).

Fortunately for me – given that it’s my favourite song – they play a storming ‘Dozer’.

If you like fuzzy, noisy psychy pop and you haven’t heard False Advertising, do checkout their Soundcloud Page, and check them out live. They are terrific, live.

And then it’s Elevant. Before we talk about this Liverpool band’s music let’s talk about the performance, after all it’s a show, right?

Stage right we have Hannah on bass, hair hanging in a curtain over her face, she pounds out a pulsing powerful beat. Stage centre Tom on drums, hair flying, and stage left we have Michael on guitar and vocals. Michael slinks, he kicks, he falls to his knees, he lies on his back. Frankly you can’t take your eyes off him. This band own the space and they put on a ‘performance’ that’s thrilling, captivating and fit for a much bigger stage than Gullivers.

Right up front I’m going say that I fell hook, line and sinker for Elevant – the music is just so good. You could use their own description ‘Post Punk/Heavy/Psych/Rock’ but this just doesn’t do it any justice. This fails to indicate that their music can be just plain funky, and even ‘slinky’ in places. It also doesn’t tell you that this is music that you can dance to. And for me it’s music that makes me smile, good music does that to me. Forgive me if I make them sound musically lightweight, they’re not. If you’re that way inclined you could just watch and be hugely impressed by the quality of the songs and the playing.

I’d listened to some of Elevant’s tracks via download and I’d been impressed. But my gut reaction to hearing them live was “fucking hell, this band are just sooooo good”. There wasn’t a single moment during their set when I thought “well that was a bit of a low point”. 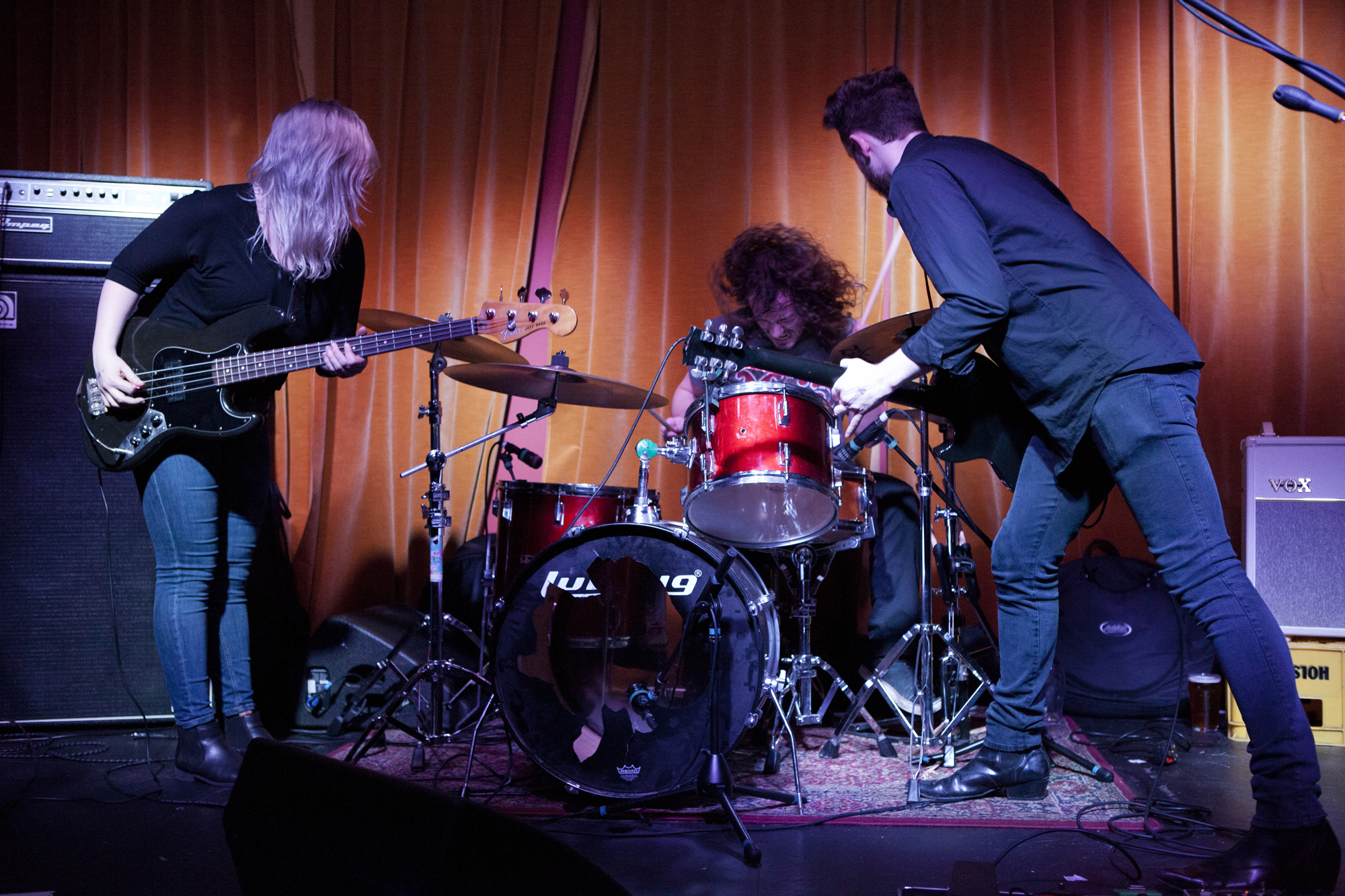 As I left – reluctantly but I had to catch the last train – Elevant were pounding out the last of their last song, as I hit the street it finished. Fitting end to a great night.

The new EP Brainless is out on April 22nd. Preorder from Bandcamp:
https://falseadvertising.bandcamp.com/album/brainless
Facebook: https://www.facebook.com/falseadv

More photos from the gig are available on our Facebook Page:
https://www.facebook.com/LocalSoundFocusHub/photos_stream?tab=photos_albums