I’d heard snippets of The Little Unsaid on download and rather liked them, so when I was invited to review them I was curious, but not expecting anything exceptional. I’ve learnt from experience that a little promise can end in major disappointment, and with the wedding reception venue, the scorching heat, closed doors and lack of fans, it all seem a bit too much effort for a Sunday evening. I was almost wishing I’d stayed at home. Then the band started and I was sitting bolt upright in my chair.

Well that’s not strictly true. This isn’t bolt upright kind of music. This is a chill-but-be-attentive, let-your-emotions-run-away-with- you kind of sound. And, OK, it’s not the first time I’ve felt like this at the start of a potential musical relationship. Often during that first track I find myself thinking ‘Yes this is pretty amazing’ but by about track four when it’s all a bit samey, I realise this is just a passing infatuation. But with The Little Unsaid I soon know I’m in this for the long haul, and it’s going to be one of those tantalising musical relationships which remain forever unrequited. And all the more exciting for it.

Singer/songwriter John Elliott has a hauntingly beautiful voice (which has an androgenous quality, and can sound either strongly male or ethereally female depending on the mood and demands of each song). His writing has been compared to that of Leonard Cohen and Nick Drake and the band were recent winners of the Steve Reid InNOVAtion Award for boundary-pushing new music creators. The band have recently released their latest album, ‘Imagined Hymns & Chaingang Mantras’, recorded with Radiohead engineer and acclaimed film score producer Graeme Stewart. Their gig at Mirfield was the last event of their present tour, before they appeared at Glastonbury.

The band’s website describe this recent album as inspired by ‘Elliott’s recovery from post-traumatic stress disorder after a year of ongoing personal trauma brought his life and music career to a standstill’. While these emotions are clearly, deeply felt, there’s not a whiff of self indulgence in these beautifully crafted songs. These are significant, in-it-for-the-long-haul tracks about surviving life in all its complexities – trauma, loss, failed relationships, fading youth – and still getting through. Somehow.

It’s not just the power of the lyrics which makes this performance so effective. In addition to singer, John Elliott, (who also plays keyboard and acoustic guitar) there’s Tim Heymerdinger (drums), Maria Brackova (moog and backing singer – and she also performs a wonderful solo at one point), and Alison D’ Souza (electric viola). This phenomenally-talented group of musicians seem to love playing together and at times you catch them smiling at each other with sheer joy – however depressing the song topic at the time.

This is an accomplished and musically effective band and each member visibly puts their whole selves into every moment they’re on stage. There’s a palpable passion, commitment and shared joy in the music that maintains a freshness, song by song. You’d be forgiven for thinking this was the first night of their tour, not their last.

Take a track like ‘Imagined Hymn’ – which the band just happened to start with. This song possesses incredible poignance – blending hope and acute sadness with a tormenting gentleness that promises so much more… Elliot’s singing and the band’s talents and passion create a song which I’d defy anyone not to be affected by. This track is full of beautiful similes and metaphors around creativity and survival, but this verse from the end particularly sums it up for me –

There are too many standout tracks for me to name them all but the beauty of ‘Tumbling Snow’ (with its invitation to ‘Come shiver out here with me’) the haunting and powerful, bitter-sweet ‘Chaingang Mantra’ (shifting deceptively in tempo and impact) and the balmy sophistication of ‘Let Desire Back’ In – left me thrilled and wanting more. And it’s the fragility of both the songs and their messages that has me sliding deeper and deeper into this musical love affair…

Another track I just have to mention is ‘Get On the Other Side of that Door!’ Again there are intriguing lyrics, inviting the listener to fill in the gaps for themselves, to substitute their own experiences and emotions. But with verses like

‘I could’ve died and gone to heaven, dear
To choke like this forever here
Is to live between the notes
And all the twisted anecdotes
You give me all I need and more
To get myself on the other side of that door…’

I’m left with the impression that some doors will always stay firmly shut to the likes of you and me. Only angst-ridden musical geniuses have any hope of getting to the other side!

Last but definitely not least, I want to mention ‘Day is Golden’ – the band’s penultimate song of the night. It opens with a verse that sets the mood – the fragile boundary between living with hope despite knowing the impact of despair…

The lyrics chart a very personal journey (presumably Elliott’s own) about recognising that while some cannot be convinced to ‘hold on another day’ and that feeling ‘senile and useless’ may be part of our lives, there is still the capacity to ‘take it with a pinch most days’.

Don’t you dare be ashamed
All the courage in the world
Is what it takes
To turn to a human being and say
‘I am hanging by a thread, my friend, today’

All in all, this was one of those musical encounters where you know that (just as in life) there will be no glib happy endings, but the ability to feel all the beauty of those unrequited musical yearnings makes it utterly worthwhile.

I know I will be listening to The Little Unsaid for years to come, but I’m glad that my first impression of this band was experiencing them live. These are total performers – fresh, vigorous and rendering each song as though they’d gleefully discovered it for the firs time. These are musical craftspeople, creatively pushing the potential in every song and committed to giving it everything they’ve got. 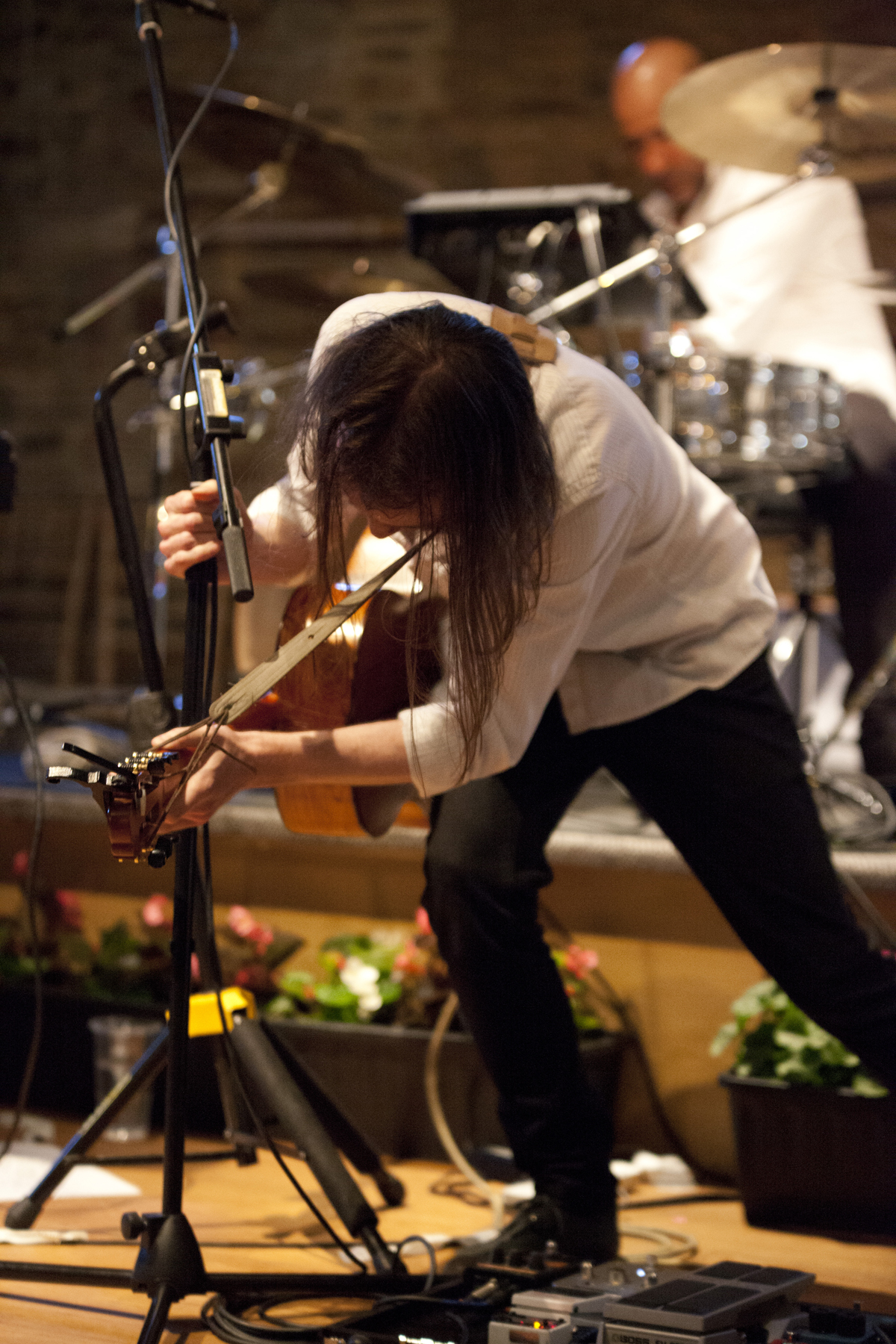