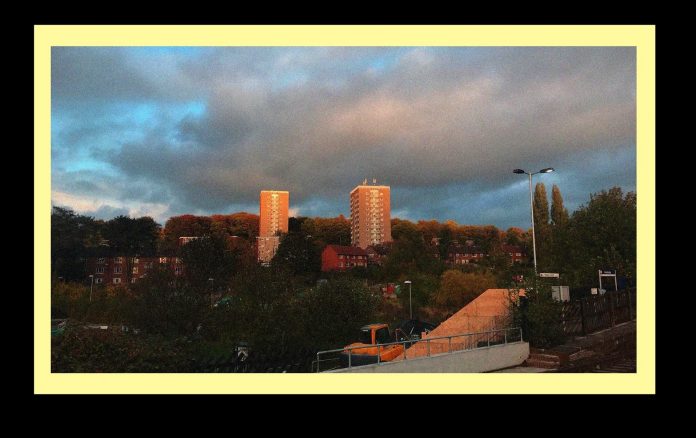 This is my third attempt at writing this review. The first two were, to say the least. a little rambling. That said there were sections of the first two versions I wanted to somehow use, my solution is to use footnotes of a kind which you can either choose to ignore or read, up to you really.

I’ve been accused of raving in what might be described as a fairly incoherent way about jellyskin’s music in the past. Can’t help that, I’m a fan [Note 1]. So I’m going to try and stay relatively coherent, I will try. Can’t guarantee it though.

I gave up trying to work out quite what jellyskin’s songs are about some time ago so let’s concentrate on what this track sounds like. The first thing is that the vocals are luscious, deliciously luscious. The vocals on their other music are great – oh who I am kidding? Wonderful – but this track has the most yummy layered vocals.

The start of the track had me thinking ‘so OK this is going to continue on from where ‘Judder’ (their last release) left off’, it has a similar feel and Will is kinda taking lead vocals. It has that dubby broken beat thing going on. Oh, and this isn’t the very start of the track which is this short choral vocal section. But suddenly it becomes something else entirely, over this juddering drum pattern it’s suddenly all, well the thing that came into my head is ‘really Mamas and Papas?’ but that’s replaced by rolling piano, and then a bit later there’s something slightly proggy (not entirely sure that they’ll thank me for that) on an organ, with something that I can only describe as really really earwormy tune. The problem with describing their music is that it just sounds confusing [Note 2].

And it may sound like a ‘forcing together of things that shouldn’t be together’ (as my terribly unenlightened friend described it when I played the track to them [Note 3]) but it isn’t. That’s the thing about jellyskin they put things together and because they know how to arrange them, how to make one section lead seamlessly into the next, it works. Although sometimes the ‘transition’ is abrupt and somewhat surprising and it’s fine, it’s absolutely fine and a great thing. And other thing is that, they suddenly surprise you, you think you know where something is going and then, they just throw something else at you, something you didn’t expect. That people, is a beautiful and thrilling thing.

So, if you’ve read my feature on jellyskin you may be asking yourself is this still darkly joyous or something else. Yes it’s still dark, it sounds dark, and as I can testify after listening to this song on repeat for around an hour – there’s so so much going on in this song that you don’t get bored, there’s always something you didn’t hear before – it started to take me to a wonderfully dark place. And yes there’s a joy there. But it’s beautiful, it really is. And it’s mesmerising, it really is. jellyskin just get better and better.