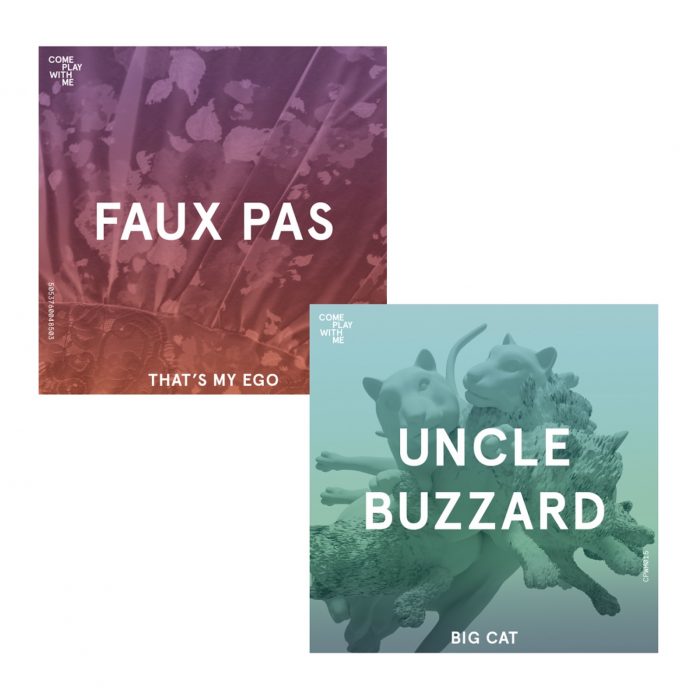 Another banger of a release from Come Play With Me (and for those who don’t know CPWM is a not-for-profit label set up to showcase and develop new music made in/around Leeds).

I reviewed Uncle Buzzard’s ‘Hotel Room’ some time back and ‘Big Cat’ has that warped sound thing going on, although it’s much much more warped, kinda swooningly trippingly warped. It’s a beast of many changes. It starts sounding like something from a 70s’ ITV vaguely trendy synth led tv theme but it changes and changes – it even has something that sounds suspiciously like a rock guitar solo, and then it has this lovely trippy atmospheric ending. And this thing has tunes to die for. This is one strangely earwormy track. This makes it sound like a mess of ‘different sections’ but it isn’t, no way, it’s all arranged and played so well that it sounds seamless. It’s huge people.

I’ve not reviewed any recorded material by Faux Pas but I did see, and be hugely impressed, by them playing live. ‘That’s My Ego’ reminds me vaguely of Placebo at points, but that’s only slightly vaguely. This track is a riot of guitar, raw guitar, and pounding drums. Beyond that I really loved the vocals on this, they have a slightly sneery world weary sound I really like. And yep it does that alt-rock quiet/loud thing but the quiet bits are intimate and beautiful and the loud are punk raw people. It has edge.

Played back to back these two tracks don’t seem to have anything in common – I guess that isn’t CPWM’s intent – but they do hang together somehow, hard to say how, but they do.

Uncle Buzzard are George Manson (Lead Vocals and Keys), Danny Blackburn (Drums), Charlie Howard (Guitar and Synth), Greg Lonsdale (Bass), Jake Williams (Guitar). Since forming in late 2017, the band have released through various labels including Bowl Cut Records and Monomyth Records. They all live in the same house and most of them are life long friends, working through rock, hardcore and angsty indie phases before reaching the
swooning-synth based indie they produce today.

Faux Pas are Ru Cowl (Vocals, Guitar) Lewis Egdell (Guitar) and Joey Leyland (Drums). Speaking about the track, singer + guitarist Ru explains “That’s My Ego is about defiance and control. I feel like there is a really small number of things that we really have control over and I think it has a really profound effect on people, mostly negative. I find that a lot of our generation find this frustrating and end up self medicating through drugs and alcohol in an attempt to sedate themselves. Being sedated is bliss but it allows people to basically settle for a life they don’t want without the self belief that they can change things.”

Ru continues “I find a lot of inspiration in the people around me every day, truly remarkable people who have overcome more than anyone should, to find their own success. This song is about taking control of who you are and addressing the struggle of those who feel they cannot. For me Faux Pas is a way of just saying “fuck it im gonna kick the shit out of this guitar for thirty minutes and I’m gonna love doing it.” It used to be a lot more about anger and hatred and whilst the themes of despair for our surroundings are still present it’s more about promoting the feeling of community”.