If the Spanish town of Ubeda had its own rogues gallery honouring the misfits and outlaws whose boots had scuffed its dusty ground, three ‘Wanted’ posters would surely hang; a trio of mug shots simply referred to as ‘Guadalupe Plata’ – the most deathly delta blues outfit to ever emerge from Andalusia.

“Our name comes from our hometown’s patron, the virgin of Guadalupe, so she protects us as we play the devil’s music,” they say. “Our music inhabits that place in our collective imagination where the demonic force straddles the blues and cante jondo.”

Make no mistake – the music of Guadalupe Plata derives from the murkiest of depths and the magic of the night. Channelling red hot passion for the blues into Hispanic roots, theirs is a sound that lingers in the sunset like a voodoo curse. Using flamenco terms, they describe their process as straining to be podrío; to be rotten, and talk of “involution,” “duende,” and “hechizo” – supernatural terms of invocation, and, well, goblins. But then again, that’s what you’d expect – concocted in a town famed as a location for Spaghetti Westerns, the band’s unique blues sits like a cowboy soundtrack pulled from a zombie’s grasp by the Mississippi Blues greats, Os Mutantes, and Jon Spencer.

A band for which convention is a dirty word, it is only right that irregular methods create their distinctive tribal sound. Whether hammering out a rhythm on a handcrafted cigar box, a whisky bottle and old cans of coffee late at night, or combining traditional blues guitar riffs and jazz drumming with an electrified wash tub; their own take on the 19h century style instrument consisting a zinc basin sound box and a chainsaw starter rope. Let Guadalupe Plata take you on one hell of a psychedelic trip when they hit our shores for their first ever UK tour in support of their latest s/t album released earlier this year on Everlasting.

“Take rockabilly, flamenco, spaghetti western scores and jazz rhythms. Channel them through howling vocals, slide guitar and feedback. What have you got? Guadalupe Plata, a Spanish trio who sound like Jack White being lassoed by Os Mutantes in a Robert Rodriguez saloon scene” The Guardian

“Frenzied fusing of blues forms and punk attitude” – The Skinny

“the creaking, visceral noise they create out of the small southern Spanish town is rooted in the universal” – Loud and Quiet 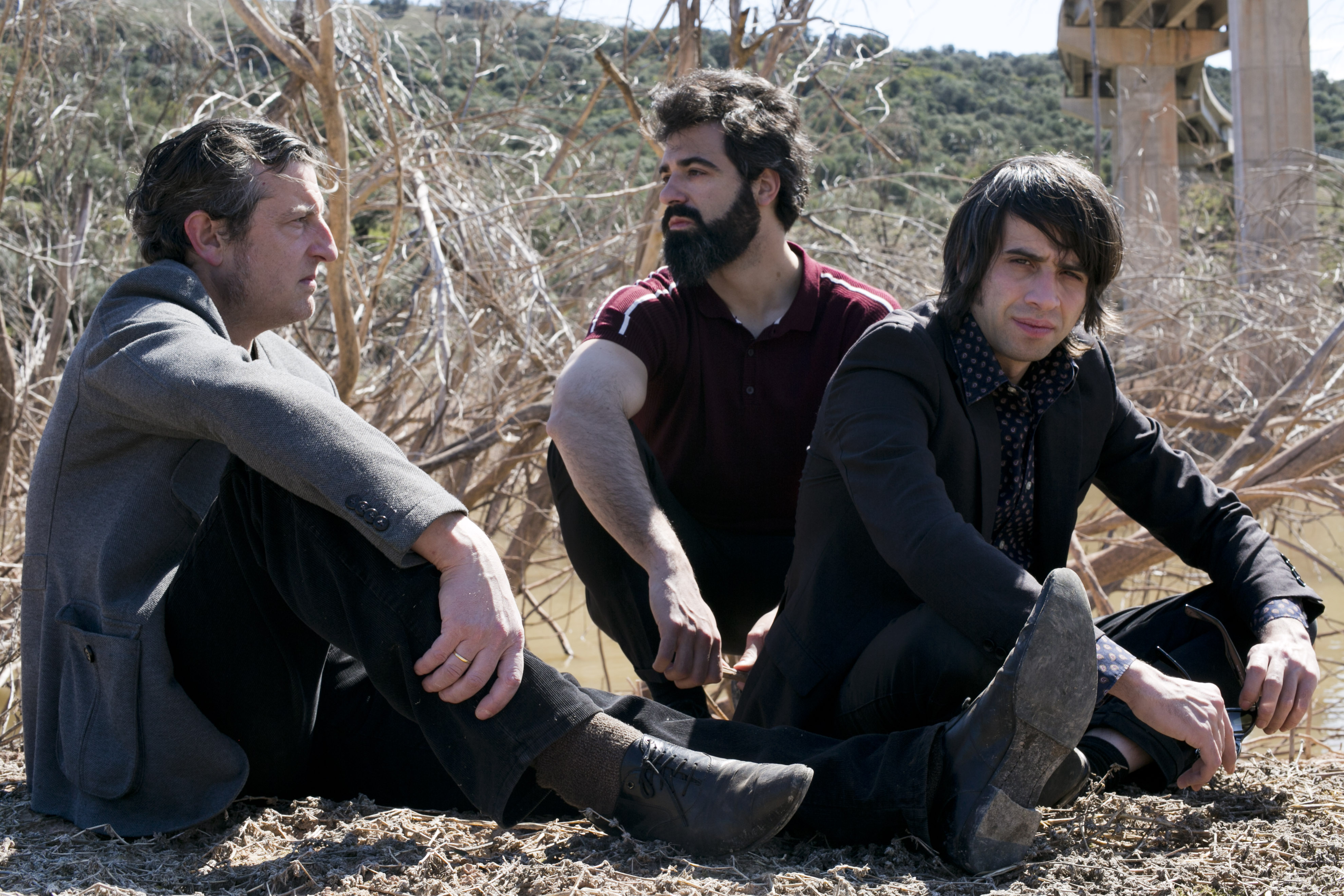 Guadalupe Plata is Pedro de Dios, “Perico” – guitar, vox, Carlos Jimena, “Jimena” – drums and percussion, and Paco Luis Martos on washtub bass, electric bass and guitars. Any other instruments you hear on this record will have been played by one or all of them, too. This record is the red Guadalupe Plata – it was preceded by the black Guadalupe Plata, a six song mini album recorded in 2009; the white GP, 13 songs, from 2011; and the silver one, also 13 songs and released in 2013.

Their last album, the silver one, sold a lot of copies and attracted a deal of international attention. It was recorded over three days at Ryan Anderson’s studio in Austin with the help of Walter Daniels (The Oblivians, The Revelators) on harmonica, and mixed by Mike Mariconda (Devil Dogs, Raunch Hands) in Málaga. It took them to festivals and clubs in Mexico, Colombia, Brazil, Argentina, Chile, the US, where they have now toured four times, Germany and the UK. These gigs have been as mad and as memorable as their club shows in Spain and the local festivals which invite the band as a guaranteed live draw. Latin America has even begun to pervade the music they make; listen to “Serpientes Negras” and pick out the Mexican cumbia, or their cover of Atahualpa Yupanqui’s “Vasija de Barro”, available on download and seven inch single to buyers of the album.

That album was considered by the European independent label association, Impala, to have been the outstanding European album of 2013, following in the footsteps of Efterklang, Adele and the Xx – an award which the band could only rationalise by surmising that it is the immediacy of their work which had appealed to the label heads, “like a punch in the face”.

Myself, I just think that if this pounding sound, with its curious mythology centred around dogs, the devil, Christ, rats, black snakes and cats, where all the lovers are Frankie and Johnny, which seems to co-opt blues, bebop or rockabilly as structure to an Andalucian tradition which already straddles romany, sephardic and moorish strains, is understood and appeals outside its context, it is because it is possessed by the sense of space, sex and the magic of the night which belongs to rock’n’roll and to much of the most nagging folk art.

The cover of the album, by Perico, depicts the trio’s recent visit to the grave of T-Model Ford at Greenville, Mississippi, where they upset a flowerpot and were attacked by a legion of poison ants. I like to see it as a travesty of a large canvas by Goya which hangs in the chapel of Saint Francis Borgia at Valencia Cathedral, showing the saint at the deathbed of an impenitent who is attended by a group of ghouls and demons, perhaps executed by one of said fiends. Goya’s obsessions, his grotesques, his pregnant shadows and hallucinations can also serve as a touchstone for Guadalupe Plata’s world.

Before a performance, as Paco and Jimena warm up and stretch, Perico will often gaze searchingly out on the filling venue. With the intelligence thus gathered and the knowledge acquired in their brief soundcheck, the band will devise a sketch of the set they will play. The colours and shades will be filled in on the hoof. The band has a precious quality – that of “drawing in” – the spectator’s degree of engagement with the music increases as the show goes on. Perico will discuss the experience drawing on flamenco terms of “duende” or “hechizo”, a spell which is not exactly cast by the band, but arises in the communion between the musicians and the public.

The band sets up, live or in the studio, staring fixedly at one another; in close formation as if for a bombing mission, in a triangle. In a music business where talk is of reducing friction, here is a band that seeks friction out. Within the challenging physicality of their performance there will be moments when each musician will display the lightest of touches; they will evoke a brooding storm, an opium den, a dense jungle or an airy plain. Where there is friction, there can be sparks.

The eleven tracks on this new, red album were recorded in London in the second week of December, 2014, live to eight track tape at Toerag Studios with Liam Watson. By working in this way they can achieve on record a similar quality of drawing in; the sketch is the song , and the recording represents the moment of painting it. Rock from first principles.

The recording begins with a closeness, a barometric pressure. It crackles, now it spits. The howling begins. At times the drum will be hollow, pounding, funereal, at others cymbals and rims skitter in delirium, or a boozy piano staggers across the dance floor. The words to the songs are often staccato phrases, unrhymed, taunts, laments, sometimes daft and childish. It has the psychedelic qualities of a trip – there are hayseed guitars, panther gasps, repetition, variation, an instrumental driven by call and response to Paco’s washtub bass, then a sudden, minute focus of the sound of bare palms on a taut drum skin.

Guadalupe Plata take their name from the Virgin patron of their town, Úbeda in Jaén, Andalucía. The virgin in the town’s church of the Misericordia is surrounded by what appears to be an aura of silver. It is very difficult to avoid the language of religious belief and spirituality when you approach their music; the three will happily discuss how their first musical memories are of the epic processions of Easter week in Úbeda, which mingle the Levantine sound of Al-Andalus with heavy, rhythmic drums.

It seems important that they come from Úbeda, olive growing country. They have been making music together as a trio for seven years. Maybe someone broke a mirror; these have been seven hard years in Southern Europe and Jaén is one of the truly hard parts of Southern Europe. When McDonald’s opened its first restaurant in Úbeda recently, the municipal brass band showed up to welcome the american fast food chain and the jobs it would bring, with a fanfare. There is a parched, cracked surface you can measure in numbers – 40 % of the workforce of the province is without work, 70% of the young. This is not Madrid or Barcelona and it is certainly not Brooklyn or Hackney; there are no media outlets, blogs or record labels in Úbeda or in Jaén opening doors for them, but there are dives, dens, strip clubs, warehouses, theatres, working men’s clubs and garages, across Spain, on highways and off tracks, where people queue to pay a handful of euros to see them.

Guadalupe Plata’s reputation and their living have been gained on the road. The three members and manager, Toni, can pile into a car with cymbals, guitars and the zinc washtub of the bass filled with T-shirts and records and set off for any town with a bar and a PA and offer their uncompromising music to the locals. They are working musicians with their late shows and the after show hours relaxing, eating, listening to music, drinking and smoking in the bars of everytown; and the music breathes what they have found there and can tell you more about Spain in 2015 than any hopeful politician, in this election year.

This isn’t a band who will claim to have evolve from record to record. They would consider the idea to be a false narrative which probably responds more to a need from the media to exaggerate facets of the creative process. They even prefer to speak of involution rather than evolution. Still it is probably true to say that this record, like the others, belongs to a time and a place, that these songs will change as they play them and that their set will be still richer for the music they present on this record. And also that they have shed some inhibitions here. It’s an ambitious record and there are almost no tricks employed to make it sound like anything other than a space – a room where music is being made. The rest is for us – this is simply the sound of Guadalupe Plata (2015), the most exciting and intriguing current band I know.

Biography by Mark at Everlasting Records