Some bands have professionalism written all over them and Hands Off Gretel is one of those bands. It’s not just the compelling stage presence of lead-singer/songwriter Lauren Tate – who does cute and powerful in equally compelling measure – but a tightness and confidence about the way all four members perform together, that tells you these guys from Barnsley are heading for the big time.

Hands Off Gretel has only been around since 2014 but already they’re making a big impact on both the local and national scene. Chosen third out of 3,000 bands to appear at the famous Camden Barfly, London, the band is now getting so many requests to do gigs that they’re able ‘pick the best ones’, according to guitarist, and founder member Sean McAvinue.

‘Being chosen for Camden was amazing,’ says Sean. ‘It makes such a difference getting seen. Before this it was like getting people into a headlock, pulling them out through the door and trying to force them to listen to you.’ It’s hard to believe that Sean – unapologetically eye-catching in his plaited beard, retro kilt and shock of blonde hair which almost sweeps the floor when he bends double over his guitar, has ever had to work that hard to get anybody’s attention. But there’s an unassuming enthusiasm in his passion for the band’s success, which this reviewer found refreshingly convincing.

The band emerged from an original music venture called The Lauren Tate Band, but after Sean broke a few bones at a rehearsal (from a fall down stairs), the pair revaluated their future, and started Hands Off Gretel. They were joined by Danny Pollard on bass and Laura Moakes on drums, and the band launched last October.

Lauren has one of those voices many singers would die for – powerful, rich and distinctly her own. And when others might resort to screeching, Lauren is always fully in control of her voice. She fluctuates from deep chesty notes to big powerful musical yells with an effortless quality that tells you this girl is in it for the long run. ‘I did a lot of vocal lessons but I’ve found my own techniques that work for me. A lot of people tell me you can’t sing like that cos of what it will do to your voice … but there’s no blood so…’ Lauren says with an endearing shrug.

Being in control of her own destiny is clearly very important for Lauren, and on stage she has a fierce energy that punches way above her slender form. ‘Before gigs men look at me and think she’s nice and they don’t expect me to have a voice with a lot of anger. But men don’t hang around when I come off stage,’ Lauren informs me proudly. And given the sort of things Lauren chooses to write and sing about, it’s probably not surprising.

It’s rather a pity that the generically adjusted sound levels at The Player Bar at Long Division don’t do the band’s lyrics full justice – as everything ends up sounding just a touch samey. Fortunately songs such as ‘Be Mine’ can be heard on Sound Cloud. A spirited anthem to the dichotomy of being attracted to someone and wanting a relationship while being acutely aware of wanting to hang onto your sense of self, this is a clever and moving song.

It is also a song that was clearly inspired by a bass line from Nirvana and Iggy Pop.. and it delivers the same quixotic pubescent angst expressed in ‘Teen Spirit’ and ‘I Wanna Be Your Dog’. Combined with the invitation (which Lauren delivers with a whimsically teasing smile)

are a whole load of reasons why the prospective lover ought to be legging it fast as they can in the opposite direction. Lauren proudly confides…

before bouncing back once more to the hope that the love-object may still be up for seduction, with the question framed by the song title.

Among the set list is also the wickedly enticing song ‘My Toy’ about a willing but silent lover. With witty lines like

‘He tries to get inside my head
my experimental love i said
please clean the mess up in my head
my red is blue and my blue is red, red
Is my, my sick affection
hurting you’

there’s no question here that we’re not talking about a cosy kind of relationship you would introduce to your mother. You might be excused for being a being a bit freaked out by the lines like

If sung by a man, these lines might lead to allegations of sexism – but then there’s a lyric about a plastic body and the title ‘My Toy’ and you really aren’t sure whether this is a track about a battery-powered friend or a breathing human being… 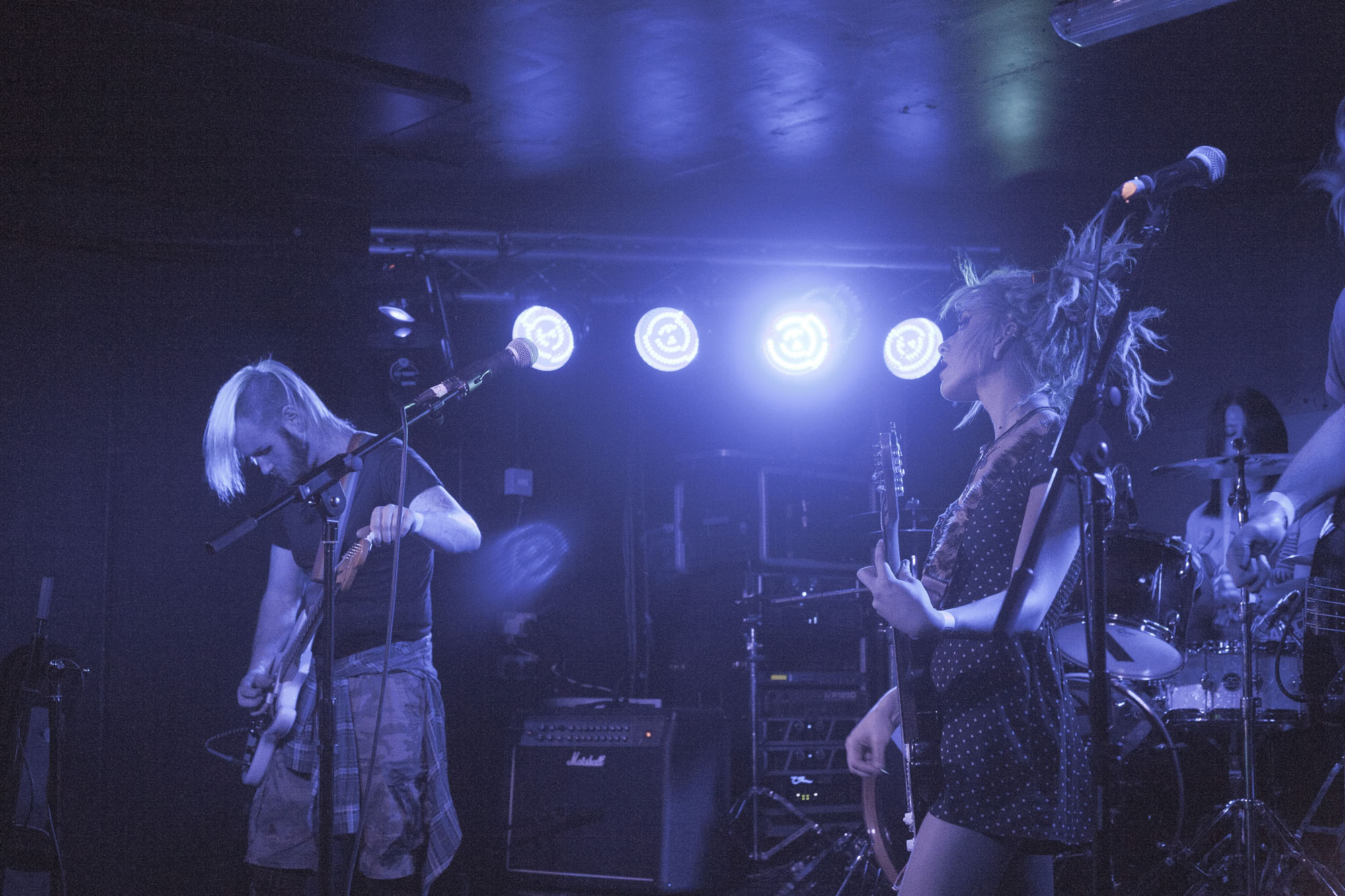 It’s hard to believe the singer and writer of these songs is an incredibly poised young woman is only 18, and from the way Hands Off Gretel work both on and off stage, you can detect that she provides a central point which is both stabilising and empowering for the four of them. But it doesn’t seem to be false modesty when Lauren explains that she much prefers being part of the band rather than its focus. ‘With the previous band it was all about me in interviews and photos and the songs, and to be honest, I got a bit sick of me. Now I see our current band more as a project which we’re all in together, ‘ Lauren says. 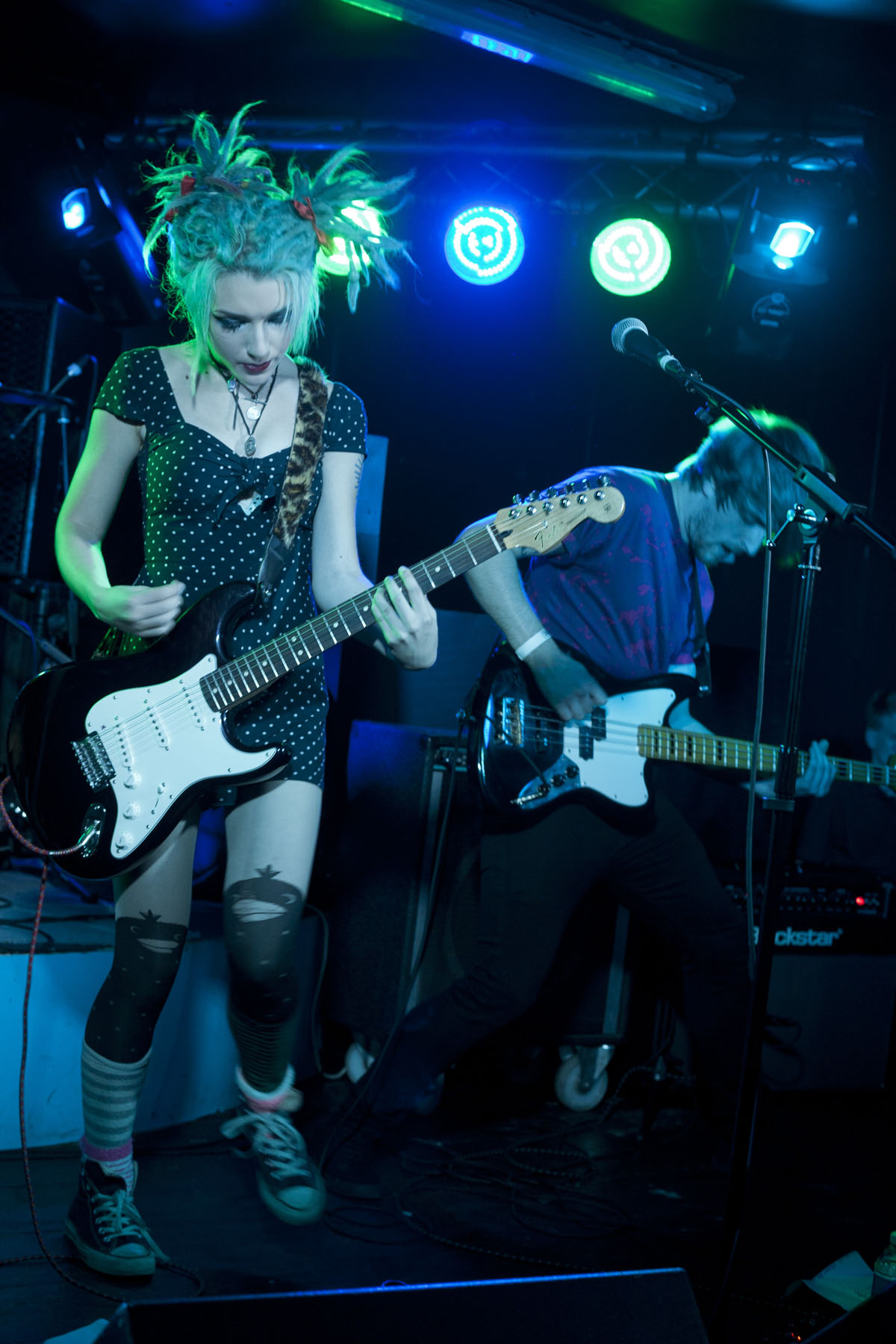 It’s important to recognise that Lauren isn’t the only woman in the band. While Laura may be less visible behind her drumkit, her powerful playing is central to the HOG sound. Quietly spoken, with an understated style that contrasts with Lauren’s green hair, short skirts, torn tights and oodles of eye make-up, Laura is every bit as focused on the band’s success, and you get a sense that there’s a very collaborative approach to the way songs are created. ‘Lauren puts together a new song and then brings it to us and we make it our own, make it belong to the whole band,’ Laura explains.

Laura also shares Lauren’s desire to show people what women can do musically. ‘I forget that being a female drummer isn’t the norm,’ she says, ‘I love to shove this in people’s faces’ when I’m on stage. A guy came up to me after one gig and said ”you’re a beast on drums” and that was really something…’

HOG’s website describes them as a ‘DIY ggrrrunge band’ and asked to describe themselves , all four band members play around with words like ‘fun, energetic, loud’ until Sean grabs an image that makes everyone round the table sit up. ‘We’re like racoons on cocaine,’ he announces.

‘Yeah – they may think we look cute, but as soon as they hear us roar they shit the bed,’ says bass-player Danny, who freely admits he’s basking in the glow of post performance adrenaline.

The band lists some of their influences as Bikini Kill, Nirvana, L7 and Babes in Toyland. And there’s also a definite New York Dolls influence in there, to my mind. When I ask HOG about their links with Riot Grrrl Lauren says ‘We’re based in grunge but not exactly grunge – it’s a more ambigious label. We’re into the anger and noise but Riot Grrrl had more of a political agenda – and we don’t have that.’

Sean who at 27 is the band’s oldest member agrees that they aren’t keen to be pigeon-holed by previous genres. ‘Our souls never set the alarm clock so we missed the 90s,’ he tells me with a sincerity that is both earnest and a cheerful piss-take – all at the same time.

You can’t help but think Lauren’s big-eyed baby-punk look must go down a storm with the Japanese market – but the band confesses that their biggest fanbase is online. ‘America, Brazil, Argentina and Germany – we have a really big following. People are really into their music there,’ Laura explains.

But what about their home town of Barnsley, I ask them.

‘I think Barnsley has a very big indie scene – and people feel safe there… so we’re seen as a bit strange,’ bass-player Danny says. But you can’t help feeling it’s a kind of ‘strange’ that HOG are very happy to be labelled with.

Last of all, I have to give a mention to the band’s especially cute merchandise. Designed by Lauren, who is the only member who doesn’t have a day job and is free to spend her time developing the band’s profile, it’s endearingly eye catching. And our photographer, who spent a long time chatting to the band’s manager (Lauren’s mother) would never forgive me if I didn’t tell you about it.