Birds and Beasts combine a love of music and the natural world to bring animals’ stories to life. With a natural instinct for pop melodies this Anglo/German duo mix harmony singing, acoustic-y folktronica, psychedelic guitar and synths.

‘In The End’ is a song that is inspired by the fascinating story of the deer whose woodland home was divided by the Iron Curtain The once heavily fortified border near Anna’s – from Birds and Beasts – hometown is now a haven for wildlife, but 30 years after the wall came down the descendants of the red deer still stick to either side of the former frontier and do not cross.

This story of separation is also mirrored by a tragic family history; Anna was born in East Germany; her father separated from his siblings in the West at ten years old, and not reunited until he was in his 50s.

Musically the duo reflect this personal song about separation and hope with an achingly beautiful tune. This has more of an alt-folk feel than a full-on folktronica sound, it’s sparse and let’s the vocals take centre stage. This is not to say that synths are not present, they are, but they are low-key and atmospheric. This is a case of theme, words and music just being right.

I didn’t expect to be quite as taken by this song as I’ve become but it worked some kind of magic on me. It’s the emotion that’s contained in the song as a whole – words and music. And how the song has layers of meanings – the specific story, the relation to a personal story and the universal. This is beautiful.

Birds and Beasts combine a love of music and the natural world to bring animals’ stories to life. Their songs connect us to all creatures who call earth their home. With a natural instinct for pop melodies this Anglo/German duo mix harmony singing, acoustic-y folktronica, psychedelic guitar and synths.
​
On stage Leo and Anna’s singing is front and centre. They perform on guitar and bass alongside occasional violin, Celtic harp and keyboards. They use drum machines, sequencers and synthesizers to produce a layered and cosmic sound. They have self-released two well received albums and shared stages with Romeo and Michele Stodart from The Magic Numbers, Chris Helme, Space, Miles Hunt, Seamus Fogerty, Liela Moss, Native Harrow and many more.

​Their lyrics stand alone as easy to relate to songs featuring powerful universal themes of love, loss, friendship and family. Dwelling beneath the surface though, each song is a well researched tale that allows the listener to relate to the fascinating lives of other animals. 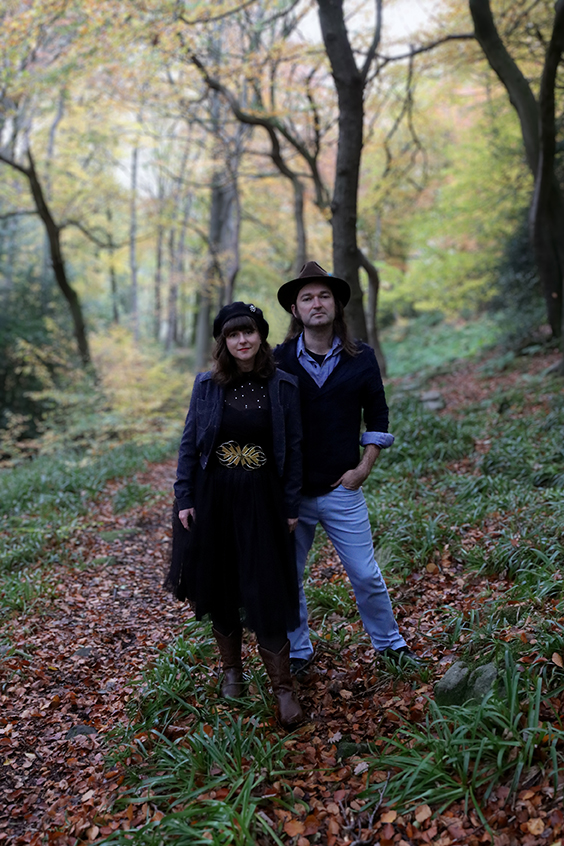