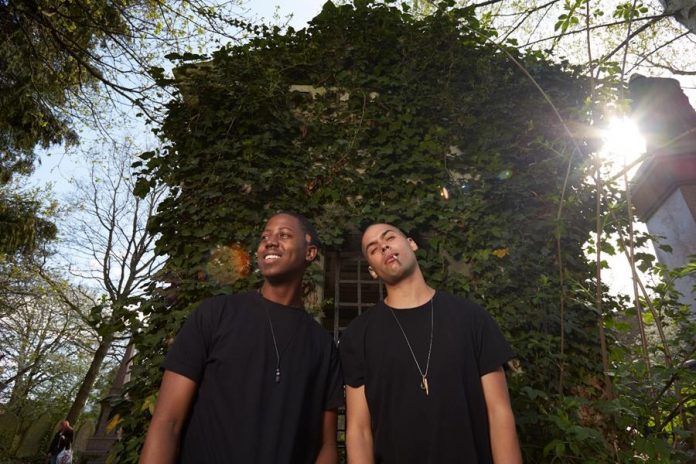 Binker Golding and Moses Boyd are a semi-free jazz saxophone and drums duo. They are among the frontrunners of a loose yet interconnected group of London-based jazz musicians that are influenced by the music that surrounds them, including grime, hip-hop and electronica as well as jazz. Like their US counterparts, they’re connecting with a new, younger audience.

Born either side of the Thames – Binker north in Edmonton, Moses south in Catford – the pair met eight years ago and toured extensively as members of Zara McFarlane’s band, recording three albums for Giles Peterson’s Brownswood Recordings. It was during the onstage sound checks with McFarlane that Binker and Moses started developing their duo improvisations, eventually bringing the idea of recording them to the attention of Gearbox Records, the vinyl-led record label and vinyl mastering studio.

Their debut album, Dem Ones, kickstarted a sensational period for the duo, earning them a string of awards including Best Jazz Act at the 2015 MOBO Awards and two wins at the Jazz FM Awards 2016: UK Jazz Act of the Year and Breakthrough Act of the Year. They were also voted Jazz Newcomer of the Year at the 2016 Parliamentary Jazz Awards.

From the beginning Binker and Moses have been building a strong young audience base performing in the more intimate rooms away from the traditional jazz venues, such as Brilliant Corners in Dalston and Deptford’s Job Centre as well in bookshops, cafes and record stores. In these situations they can play without amplification, often ‘in the round’ and facing each other, drawing the audience in to their uninterrupted sets that continually ebb and flow, building to tremendously powerful crescendos.

‘Journey to the Mountain of Forever’ is a two record set: the first disc features the duo on their own, while on the second they are joined by the great UK free jazz saxophonist Evan Parker, trumpeter Byron Wallen, harpist Tori Handsley, tabla player Sarathy Korwar and drummer Yussef Dayes.

Disc / LP One: The Realm of Now
1.The Departure; 2.Intoxication From The Jahvmonishi Leaves; 3.Fete By The River; 4.Trees On Fire; 5.The Shaman’s Chant; 6.Leaving The Now Behind
Musicians: Binker Golding – tenor saxophone; Moses Boyd – drums

Disc / LP Two: The Realms of the Infinite
1.The Valley Of The Ultra Blacks; 2.Gifts From The Vibrations Of Light; 3.Mysteries and Revelations; 4.Ritual Of The Root; 5.The Voice Of Besbunu; 6.Echoes From The Other Side Of The Mountain; 7.Reverse Genesis; 8.Entering The Infinite; 9.At The Feet Of The Mountain Of Forever