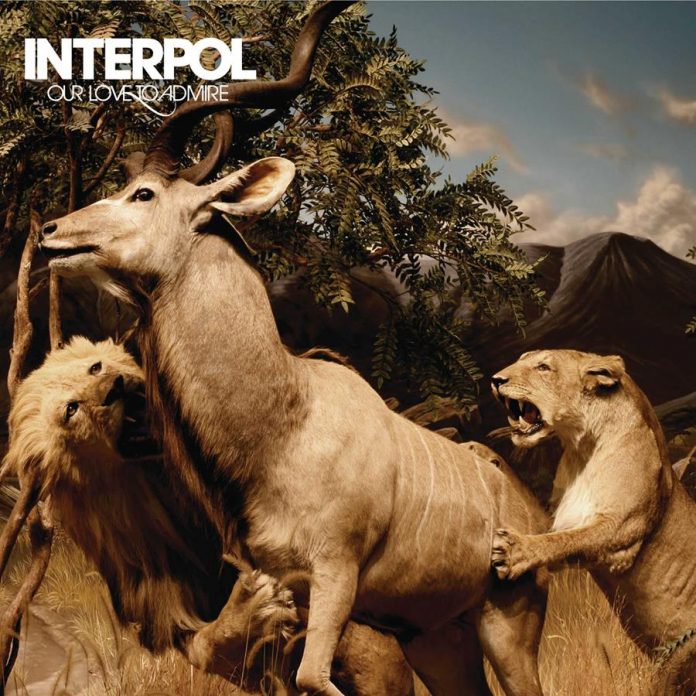 In the late 90s, Interpol emerged as one of the American indie-rock scene’s most exciting and inventive new bands. The New York outfit’s artfully layered sound drew comparisons to a multitude of notable post-punk combos, but Interpol’s cutting-edge sound was wholly its own. That’s the case with 2007’s ‘Our Love to Admire’, the band’s third album as well as its first major-label release and one of the group’s biggest selling albums.

With the full participation of the band members, to commemorate the 10th anniversary UMC will release three special expanded-edition reissues of this beloved classic: a two-LP vinyl set, a double LP with bonus DVD, and a CD/DVD set on August 18, 2017. The LP and CD will debut a sparkling new edition of the original album, remastered for this release by Gavin Lurssen with all of its original packaging intact.

The bonus DVD captures the band’s 12-song performance at the London Astoria on July 2, 2007 and includes live versions of several songs from Our Love to Admire, along with such earlier Interpol favorites as ‘Narc’, ‘Obstacle 1’, ‘Public Pervert’, ‘Evil’ and ‘NYC’.

Interpol formed in the late 1990s and quickly established a dense, intoxicating sound featuring layers of guitar, bass and synthesizers. The band came up through the vibrant New York scene, alongside such notable contemporaries as the Strokes and the National, but gained crucial early attention in Britain, where they recorded a prestigious live session for legendary BBC DJ John Peel.

In the years since its original release, Our Love to Admire has remained a cornerstone of Interpol’s body of work, and continues to stand as one of the key albums of the musical era in which it was created. Now, with these distinctive 10th anniversary editions, this modern classic shines more brightly than ever.