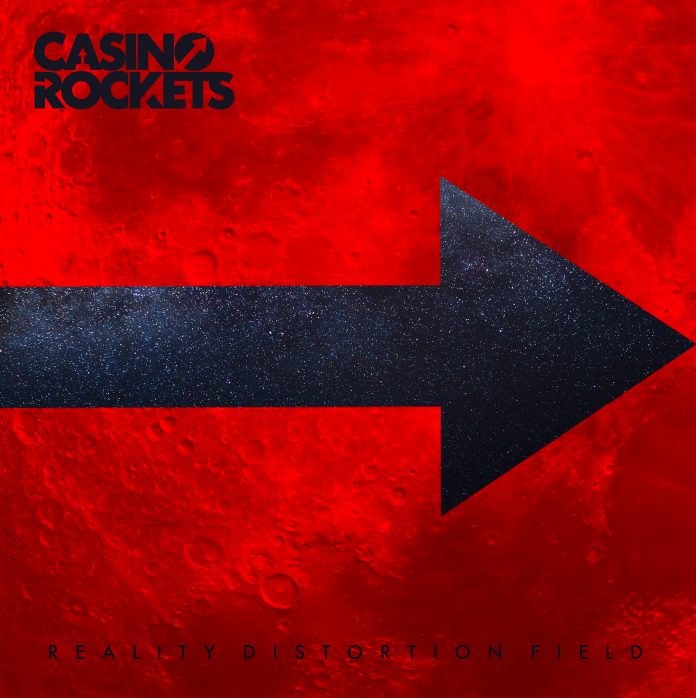 It’s been a long time since I’ve reviewed anything from Casino Rockets and, on the evidence of this album, boy have they grown. They still have that ‘we refuse to be forced into any musical niche’ thing going on; but their music is more complex, more layered and if anything taking in more influences. It’s more inventive and something you can really get your musical teeth in.

Opening track ‘Impala’ surprises with a pulsing electronica rave intro before smoothly morphing into some of a classic rock track, hint of R’n’B, dash of psychedelia. Sections of crashing guitar, sections of delicately played guitar, sections that burst into full-on psychedelic rock. It’s one of those tracks which sounds better the louder you play it, you get me?

‘People Like You’ is a smoother, sparser thing. Driving beat, washes of sound, almost Afro-beat plucked guitar. But is this enough, no way. Suddenly it changes into something that has more than a hint of later period Floyd. This is a blast of joy. ‘Only Light Can Save You’ kind of has the same feel but it’s infused with electro-rock and is slower, and then faster. This thing changes and changes – sudden vocoder like sections, weirdly off-kilter drums.

And suddenly it’s angular – ‘Simpatico Thieves’ is all clashing rhythms, a cascade of plucked guitar. Mysterious lyrics. But suddenly it changes – it becomes lusher. It reminds me of something – something I can’t quite put my figure on, but it’s vaguely 80s. Perhaps a touch of Robert Plant’s solo work. It’s enigmatic, compelling, hypnotic.

‘Fonzerelli’ – now there’s a name to ponder over for people of a certain age (Google it people) – is a lush piece of electro-pop. A tune to die for, a bass line to swoon over, the sweetest vocal, lovely tasteful guitar. Why this is called ‘Fonzerelli’ I have not the slightest idea but who cares when a song is this good.

Sweeping synth introduces ‘The Maker’ which I’m going to describe as electronica with the smallest hint of pop edge. Layers of beautiful sound sweep over each other. It builds, no it bubbles, into something more rhythmic while keeping those mismerising sweeps of sound.

And with ‘Black & Red’ there is a change of sound. Psychedelic warped guitar that has more than a hint of those early acid psychedelic jams by Pink Floyd. Like those you can hear the blues at the heart of it. But this a track that changes constantly – full on psychedelic rock, found sound sounding spoken word. My only complaint; could be much, much longer.

‘Drive Me To The Dusk’ takes the psychedelic rock up a gear, adds in a more than a hint of fuzzy garage rock. Swirling sounds. It’s a trip, people, a journey into sound. This comes at you in waves, waves that build and fall. Each build is wilder and wilder. Dig it.

Closing epic ‘Kachumber’ (this is an album of tracks that clock in at over 4 ½ minutes, with tracks that are longer) is, in contrast to the three previous tracks, a beautifully restainted song. Fantastically put together it sweeps from sparse to lush and rich and back again. It seems to get louder only as other instruments come in. It oozes beauty. This is something you need to hear.

As different as the tracks are on this album, and there is an incredible range of feel and sounds, it hangs together as a journey through sound, a trip through the musical mind of the band. A trip that has a beginning, a middle and an end. There’s a shape to the album as a whole that is incredibly satisfying. It reminds me of albums of old. This is definitely one to be played as a whole in the order the band put the tracks in.

So there is the journey of the album as a whole, but there is also the journey through the individual songs. Casino Rockets’ songs twist and turn, surprise you. They start off one way and end in another; and yet, for all twists and turns, they never sound disjointed.

The reason for this is that is the band’s music, and while it takes in many influences, it’s something that is their music. Beautifully put together, wonderfully played and very much their music.

I urge you to join Casino Rockets on their journey; it’s a trip, sometimes wild, sometimes taking unexpected paths but it is fabulous.