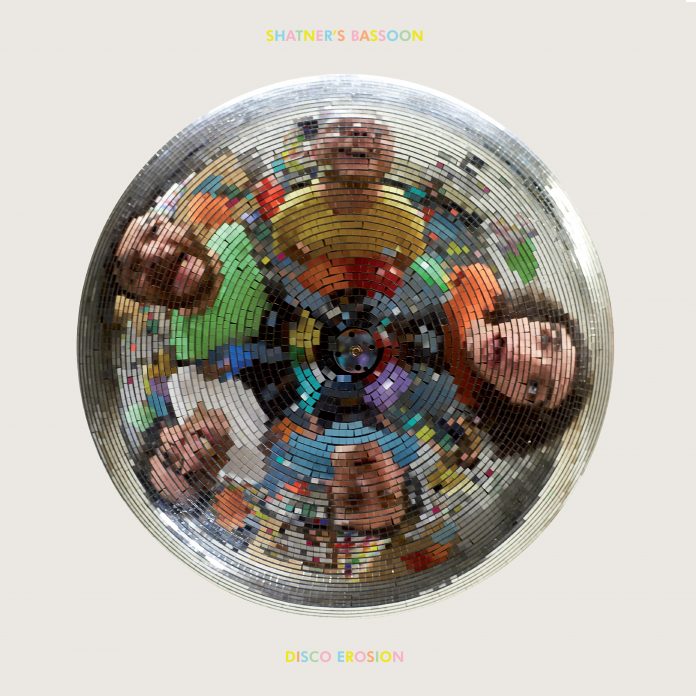 How in the hell do you review a band like Shatner’s Bassoon? It’s going to hard to convey exactly what they sound like, but I feel compelled to review it, to introduce you to the brilliance of this Leeds band’s music.

In reviewing my options for quite how to approach this I looked at some other reviews, they vary. Some reviewers take a soundbite approach where they just go for a starling phrase – the most memorable of these being ‘demonic garglings and cacklings, or what sounds like a monkey eating cornflakes overlaid by cool Fender Rhodes licks’, well yes but this doesn’t exactly help anyone who hasn’t heard them work out whether they like them. And basically does anyone really know what a monkey eating cornflakes exactly sounds like, not me. Whereas some analyse each individual track almost sound by sound, but this isn’t gong to help either really.

I really like Shatner’s Bassoon but defining exactly why is hard, really hard. If pushed I might say “Because I just do”. That doesn’t help you much either does it, unless you have some idea of what music I like and why, that’s just not helpful, and I like so many different types of music that it’s almost easier to say what I don’t like. So after much listening to this new album, and frankly probably irritating the hell out of my neighbours, I decided to actually really listen to it and try and work out why I like this band.

So OK at least some of their sound is avant-garde jazz of an improvised nature. I like jazz, I’ve been listening to it from a very early age – look I didn’t start with the difficult stuff, my Dad started me on New Orleans marching band stuff at an early age, he worked up to the more difficult stuff over time. I like that difficult to listen to stuff – bebop, modern improvised jazz, that sort of thing. And they use basically what are jazz band instruments – saxophones and clarinets feature for example. And yet that jazz sound is filtered through what could broadly be called rock of various types.

So in their music I hear stuff that I like influencing it. I’m hearing absolutely tons of Zappa type sounds and structures. I hear hints of the Hedvig Mollestad Trio (a jazz-prog band that use electric guitars in a ‘traditional jazz trio’ format. By the way HMT rock, they rock big time). I hear the angularity of Devo, the acid improvisational psychedelia of say Gong, the stop-start fairgroundy punkish sounds of early Cardiacs. And some vaguely classic prog sounds somewhere there – there’s one part of one track that almost sounds like Nektar. There are hints of Van Der Graaf Generator – perhaps the rather more raucous tracks rather than the more delicate material. There are bits that sound like sludge played by a jazz band. And rather bizarrely The Bonzo Dog Doo-Dah Band, or perhaps not at all bizarrely.

So rather strangely I’ve just – honest, didn’t read it before – actually read the press release that comes with the review link and it says

“The result is a glitchy and deranged carnival of paranoia, which blends influences from the likes of Mr. Bungle, Frank Zappa, The Cardiacs, Tim Berne, John Zorn, Man From Uranus and Fred Frith”

This throws in a few more sounds I hadn’t picked up on, but couldn’t disagree with at all. As an aside I might (and will) just correct the writer of this release who calls Cardiacs ‘The Cardiacs’. Rant starts. Never were a ‘The’ band at all. Always were just Cardiacs – apart from the period where they were called Cardiac Arrest. Try saying The Cardiacs on the Cardiacs Facebook Group and you’ll see what happens. Rant over.

To actually review each of the four tracks individually – they vary from being around eight minutes long to almost 13 minutes long – would be almost pointless. I’d end up reviewing the tracks note-by-note. So I’m not going to do that.

The band have released one of the tracks as a single – it’s the shortest one – so give that a go and you’ll hear what they sound like.

Clearly this isn’t easy-listening music – it’s wild, disconcerting, complex and confusing. For the first few minutes you may find yourself just chanting ‘no I can’t listen to this any more’ over and over again but suddenly you start hearing the structures in the tracks, sounds that’ll just make you smile, and things that make you think ‘hey wait a minute that’s brilliant’. And yes, this is music with a disturbing edge, but that’s not a bad thing, not all music should be obvious, easy and happy. And it is music that rewards repeated listening – the more you listen the more you hear.

Steeped in malfunctioning improvisation, passive-aggressive minimalism, surreal avant-punk and free jazz trances, Leeds quintet Shatner’s Bassoon sound like little else. Since their formation in 2010, the experimental outfit’s intense maelstrom of beguiling yet disturbing noise has earned the group a reputation as a must-see live act.

Each member has a wide and disparate influence and approach to making music which all filters into the bands overall sound of evasive song structures, angular rhythms and anxiety inducing psychedelia.

Shatner’s Bassoon’s aberrant amalgamation of styles, create an unforgettable spectacle, which has previously taken them to festivals such as North Atlantic Flux Festival, Copenhagen Jazz Festival, Manchester Jazz Festival, Lancaster Jazz Festival and Beacons Festival. Similarly, the band have toured extensively around the UK, previously playing alongside the likes of Melt Yourself Down, Matthew Bourne, Roller Trio, and more, whilst captivating audiences as if by hypnosis at every outing.

The TV series Brass Eye (https://en.wikipedia.org/wiki/Brass_Eye) used the term Shatner’s Bassoon in a 1997 programme. In this episode the programme makers asked drug dealers for several types of fictitious drugs. One drug mentioned was called Cake, described as being from Czechoslovakia, despite the country no longer existing when the episode was screened. The drug purportedly affected an area of the brain called “Shatner’s Bassoon” (altering the user’s perception of time).