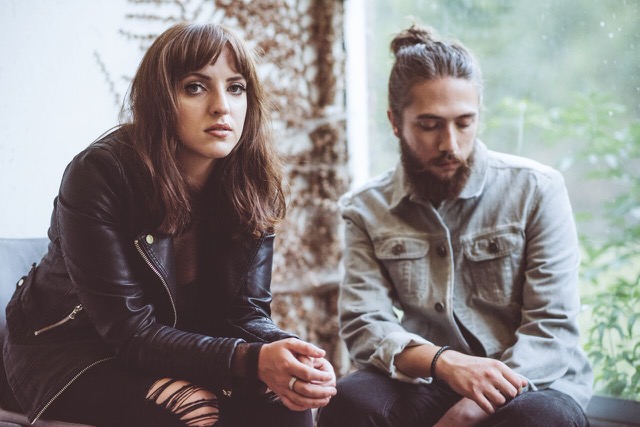 Meadowlark have announced details of their anticipated debut LP, ‘Postcards’, for release on June 30th via AllPoints (previously Believe Records). Marking this announcement, the album’s title track is available from today.

‘Postcards’ brings together some of these previously released tracks (including ‘Headlights’, ‘Eyes Wide’, ‘Satellite’) alongside brand new material written during various retreats the pair took around the UK, working from any cottage they could find that had a piano. Free from distractions and loaded up with ideas gathered from observing the world around them, they used such spaces to craft the songs that form ‘Postcards’. While deeply personal, there’s more to their writing than basic love songs. Matters of the heart are there in the background, but Dan and Kate are engaged, culturally aware, well-travelled people, always looking further afield for themes and concepts. Recording these ideas took place during three 10-day long stints, with producer JJ Mitchell in an old church. It wasn’t always easy, there were many long nights in the pub wondering if it was all going in the right direction, but they emerged with something truly special.

Once recorded, Meadowlark then teamed up with Spike Stent (Haim, Chvches, Massive Attack) to mix the songs and ensure ‘Postcards’ is everything they had hoped it could be.

Alongside today’s release of ‘Postcards’ (the single), Meadowlark are calling on their fans to be involved with creating the official video for the track. The lyrics of ‘Postcards’ (the single) act as an ode to an ex-lover, it’s what you wish you could have said to someone but never felt you could at the time. Kate & Dan are calling on their fans to write postcards to someone that’s impacted their life in a significant way, good or bad, and send them in. The anonymous postcard notes will then form the basis of the official ‘Postcards’ video.

Dan, who is a music video producer alongside being in Meadowlark, explains: “Our music videos have always been self contained up until now, it all happens behind the scenes but this time I wanted to do something honest, meaningful and collaborative. For me that’s what ‘Postcards’ (the song) is all about, being brave and opening up.”

Full details of how to get involved with the ‘Postcards’ video project can be found on the band’s website: http://www.meadowlarkofficial.com

Meadowlark recently supported Amber Run on their UK tour and embark on a headline tour throughout May.

Tickets for all headline shows are on sale now from here: https://www.songkick.com/artists/212012-meadowlark