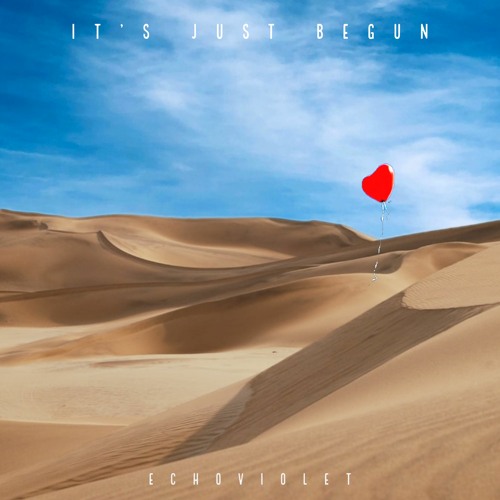 Echoviolet’s first EP gathers together their previous singles and includes a new track for good measure. This is no bad thing – it let’s you catch up if the band is new to you. I came to the band with the release of the last single. So I too missed out on the previous releases.

The EP’s opening track ‘Hint’ is going to give a hint (I’m sorry. couldn’t resist that) of the band’s sound. It’s alternative rock but with a strong melodic sound. It majors on brilliant playing, a strong vocal and an incredible sense of dynamics. And the guitar work on this song is outstanding. It’s basically a solo the whole way through – providing another melody line. it has something of an 80s; progressive edge to it – not indulgent, big on a tun.

‘Why Can’t I?’ edges up that progressive sound and feel in both sound and lyrics.Mixing alternative rock with something of a hint of folk. I love both the lead and backing vocals on this; they’re a joy. And, as I’ve come to expect, that wonderful guitar makes a comeback – throwing in a kind of 80s’ rock feel at one point and at another something that reminds me of later King Crimson – it’s all searing distortion.

This makes ‘City Of Impunity’ all the more surprising, almost shocking to be honest. What this is a slice of NY Punk influenced rock – that vocal style, stalking basslines, crashing guitars. It’s the city sounds intro that makes this track for me – the icing on the cake. Yet listen closer, the words of this thing are cool, with a sense of threat, of warning. This track is way cool.

‘Falling Light’ is an alt-rock track; it does that quiet/loud thing. But it does it with a tune to die for. A guitar that rocks my world – I positively love that almost classical sounding break towards the end. A drop out section that is somewhat scary. This thing is so damn earwormy it hurts.

And so to ‘End Of What We Knew’. I honestly see no reason to change what I said in my review of this. What we have here is an incredibly catchy, fantastically melodic, rock track. It’s not heavy or hard but it’s definitely rock. There’s an amazing vocal on this track, the vocals are clear and pure. And that voice sings over ever changing sounds. It’s sparse with that swooshing guitar, it’s swelling with huge guitars. At times it sounds futuristic and at times like rock church music. The playing on this track is amazing, wonderful, fantastic. The kicker in the song; a soaring guitar solo that takes off with an incredible power. A solo that no late 70s or 80s progressive melodic rock band would be ashamed of. It’s not flashy, it’s melodic and sophisticated.

Echoviolet are a band that do their own thing, unafraid to throw all sorts of things into their music. Some of these things may not be fashionable but who cares when it results in music this good. And what shines through is that this is a band who have all the musical tools they need; the playing, the vocals, are outstanding.

And these are great songs put together so well. With a great sense of melody, never flashy for the sake of flashiness – which I’m sure they could do, and it would be wonderful – but with a sense of restraint which makes these songs quietly and brilliantly impressive. The range of the songs on the EP show a band who are no one trick pony – there’s variation but the sense that they come from the same band is there.

This EP is a bloody joy, people. Can’t recommendation this highly enough.