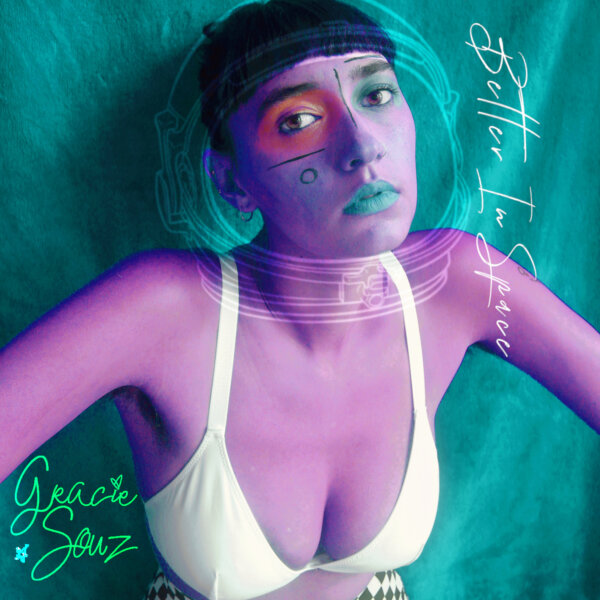 This is a release I’ve been waiting for. Having been beguiled and mesmerised both by the atmospheric sonic landscapes and the emotional depth of the two tracks GracieSoux has released from this EP – ‘Brian Cox’ and ‘Before, An Apparition’; I’ve been waiting with bated breath to hear the other two tracks and experience the total impact of the EP.

The EP opens with the haunting ‘Bound’. The intro has a filmic feel – random beats, unidentifiable sounds. It becomes sweeping washes of sound, a simple sparse rhythm. While Grace sings words that seem to describe how she is ‘bound’, and of her desire to escape the ties that bind.

It’s Celtic in feel – taking in hints of both Irish and Scottish sounds. The sound is both sparse and sonically rich. But, for me, it is her voice that takes centre stage. Emotional, haunting, it draws you in deeper and deeper.

Although I’ve heard ‘Before, An Apparition’ before – many many times if I’m completely honest – being heard after the haunting sounds and feel of ‘Bound’ I am drawn deeper into the sonic soundscapes of the song. The song explores themes of memory, transient moments and perseverance both in sound and words.

Washes of sound drift across the sonic landscape, drums stab out at you while Grace sings in a slightly disturbing tone, a tone with an edge of anxiety – at least to my ears. And at intervals it explodes into an electro-dance sound – soaring vocals, huge synth string stabs, slightly off kilter keyboard runs, rhythms that pulse.

I still find the feel of what I have come to call ‘the full of anxiety’ sections disturbing, but after ‘Bound’ more so. But this makes the swell into full on electro-dance all the more uplifting.

As I said in my original review ‘this goes way beyond electro-pop, although it might be that somewhere deep down in the depths of the song; it has become sound sculpture, a sonic poem that uses sound to describe feelings and thoughts’.

With ‘Brian Cox’ the narrator of the songs is finding a way to escape the ties that bind, the memories that haunt. The song addresses themes of loneliness, isolation and escapism. Space in this song is metaphorical; it stands for freedom from what is happening now and what went before, from being grounded in a place where you are hemmed in .It’s a comforting place, a place away from the day to day difficulties of living. Brian Cox in this context is the guide to Space, to breaking out, to finding a way out, to being free. For me the key line in this song is ‘There’s just something about being grounded that hurts me’. And that line always makes my heart lurch.

There are musical parallels here. Parallels that Grace reminds us of; she revisits the feel of ‘Space Oddity’ in the intro. It’s a hint, a nudge, to show us what the song is about, to help us get a handle on it.

The lyrics are compelling – being loaded with both directness and, at the same time, metaphorical descriptions of feelings, of the song’s character’s needs and feelings.

The combination of words and music is haunting and completely compelling. The music is mesmerising – you are drawn into the musical ‘picture’ it paints. The words intrigue – they demand that you listen to them, mull them over. But over and over again I am drawn to the vocals.; The purity and the bleakness of her vocals add so much to the song; indeed I’d go as far as to say that without them the song would lose so much of its emotional impact.

The EP closes with ‘Burial’. An epic soundpiece, a poem set to sound. It seems to revisit the themes of loneliness, isolation and unhappiness. With a plea from the narrator to be ‘a happy girl in this funny little world’. Yet at the same time it applies those individual feelings to the group. It’s hard not to apply at least some of this piece to lockdown; the feeling of being buried alive in isolation.

It’s harrowing, difficult to listen to but at the same time you are compelled to listen, to be pulled down and down deeper into it. The words and music evoke emotion – despair, unhappiness, a hint of anger, the feeling of being left with no-one ‘who loves you like they used to’. And it cuts so deep that you feel it inside. And as the track goes on, it becomes a plea for happiness, for joy, a swell of a desperate need for it.

The individual songs on this EP have their own impact but taken together that impact is multiplied many times. I was left emotionally wrung out the first time I listened to the whole EP, and that feeling has not gone away.

As hard as some of this music is to listen to, you can’t not listen to it because it’s beautiful. The way the music and sounds are sculpted, the words that intrigue and demand thought, Grace’s voice. A voice that is more than just a vocal, it’s an instrument that she uses to project feel and emotion.

And the music is music that you can’t help but listen to again and again. Listening for things you haven’t noticed before. It’s complex and rich.

But there’s more to this than mere words and music; what’s beautiful about this is that those have been taken and turned into art – sound sculpture if you will. Something that is more than the sum of its parts. Emotion turned audible. Emotion turned visible because these songs are cinematic – they make pictures in your mind.

This EP is so good I am unable to put how good into words. It’s incredible. It’s beautiful on so many levels – musically, vocally, lyrically and, most importantly, emotionally. This is something to be treasured, held close to your heart.

‘Better In Space’ is a conceptual four track EP inspired by the political and social realities at the time of writing in Summer 2020. Exploring the anxieties of being a young woman, sad, angry at the world and pretty lonely, this record is a magical, expanding journey experimenting with the electro-pop genre. It was created as a cyclical record, each track a separate chapter from the same book that steadily grows to a climax reminiscent of epic film scores that it was inspired by.