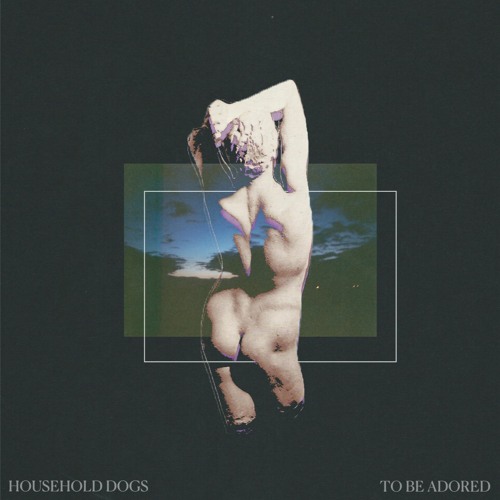 The one, and sadly only, time I’ve seen Household Dogs live they left me flabbergasted with their varied sound, stage presence, and what I can only describe as the sheer righteousness of their songs.

And this EP, and I’m afraid to say this is a spoiler, has done exactly the same thing to me. To the point where actually trying to tear myself away from my rapt attention to the songs to put fingers to keyboard is almost impossible.

The opening track – ‘Jesus In Leather’ – is huge. This is a sound that has the feel of vast places, places in a place that you can’t quite put your finger on. It’s an unholy glorious mix of Nick Cave, late period Leonard Cohen and Theatre of Hate. There are clanging guitars that hit you like a hammer, angelic harmonies and sweet sweet sounds. It’s compelling, mesmirising and hypnotic. But listen closer, my friends, for then the words will come into sonic focus. And what words they are. This is far, far away from the average song lyric; these are lyrics that are poetry. They conjure up visions in your head.

Tear yourself away from that song, and move onto ‘To Be Adored’. An almost pop sound and a wild raw guitar sound are mixed, seasoned with the sweetest subtle guitar licks, and topped with a vocal that crawls from your speakers with something you could almost describe as menace. It’s the contrast that does it; that makes it wonderful, that provides the surprise. Again the words are words to listen to, to hear properly.

The sound of a storm and ‘Julliette’ is here. This has the feel of a Gothic Victorian novel, and yet also the feel of a soundtrack to a film about a dystopian future. A lead vocal that is upfront but almost whispered. There is a dark moodiness of an almost Americana feel mixed with this huge pop ballad. But the more I listen to the track, and this is more times than I care to tell you, there is something of the brooding vastness of The Doors that lurks in this song. And at the end you are left with ‘nothing gonna change, no nothing gonna change, the way you feel about the dead’.

And then we are at the close with ‘Ain’t That Girl At All’ which might sound like a retro sounding big orchestral pop ballad in the style of The Last Shadow Puppets. But as the vocals come in you realise this is nothing like that at all. This is darker, much darker. It tells a story, a story that I suspect will be different for each listener.

I haven’t come close to coming up with a genre that neatly encapsulates the sound of this EP. Americana post-punk, Gothic Americana rock, mutant orchestral pop, all figure but don’t come close. Whatever we’re going to call it, the music is put together with an outstanding level of skill. And while the songs may vary in sound, they have a feel, a mood, that hangs them together.

Although I’ve already said the words of these songs are wonderful, poetry-like; it’s worth repeating. These are lyrics on the same level as some of my favourite songwriters; Leonard Cohen I’ve already mentioned, Jim Morrison, Lou Reed, and Nick Cave are there.

All I can say in closing is that Household Dogs have made something here that I just don’t have the words to tell you how good it is. Each track stands alone but together they add up to something that is more than the sum of its parts. I want to drown myself in this EP, to play this on repeat until my neighbours scream for mercy.

This is music that has musical, lyrical and emotional depth. It is gloriously wonderful now, and deserves to go on into the future as a classic. It’s that brilliant. If you haven’t already, this is a ‘must listen to’ release. Go wallow, go drown, in its vast glorious moody darkness.