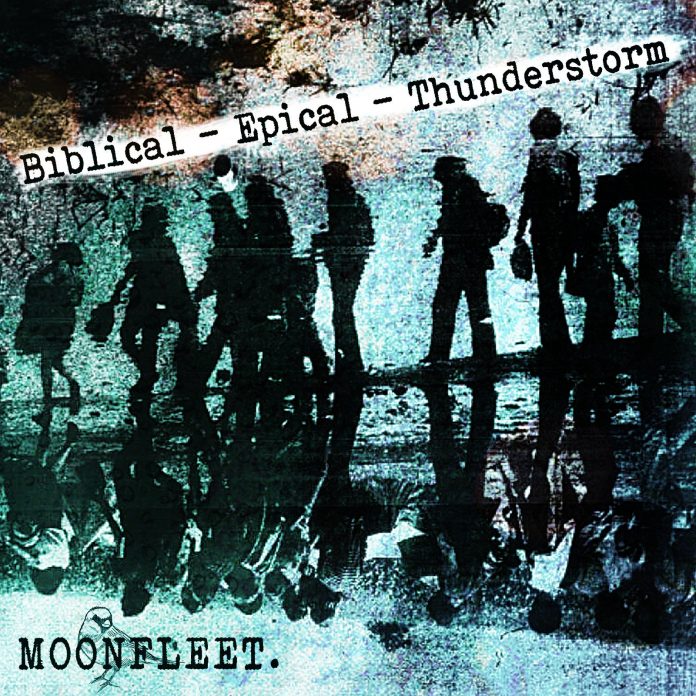 The debut EP from Leeds’ based music project MOONFLEET is something of an epic thing. It sets out to connect the philosophies of the late 60s with modern times through both the music and lyrics, and is inspired by the Woodstock Festival.

So it’s covering some big topics, the music is equally as big. It uses pieces of announcements and other sounds from the festival itself. The music itself has something of a late sixties feel to it, but with an up-to-date feel going on. It’s slightly folky in places, sometimes it has a jazz feel, and sometimes it’s post-rock. It’s rich and layered, there are orchestral instruments. Musically it’s incredibly accomplished and rich. You should also be warned that the three tracks on this EP last around 8 minutes each – each track is a movement of the piece as a whole.

For anyone who’s seen the documentary film of the Woodstock Festival, it follows the story of the festival from the start to the thunderstorm. But it uses those as a jumping off point, an inspiration.

The EP’s opening movement – ‘Biblical, Epical’ – starts at the beginning Woodstock wise with the crowds making their way to the festival, abandoning their cars, all done through announcements and radio excerpts. Musically it starts off sounding rather folky in an orchestral way, before turning seamlessly to something of a jazz feel, but that folky motif returns, to be replaced with something that oddly reminds me somewhat of The Polyphonic Spree in a kind of post-rock mode. To end with ‘found sound’ of Woodstock locals turning about the festival goers. And the announcement that ‘it’s a free festival from now on’.

So we’re one movement in and my senses are all ready overwhelmed. So onto the next movement ‘We Tore Up The Plan’. This again starts with excerpts of speech from festival goers before moving into something of what my friend described as a rather ‘plinky plunky lovely sounding’ intro. It shifts moving from something folky to something rather ‘subdued rock’ and hugely layered orchestral sounding sections. The thing with all three of the movements is that they shift feel all the time, they shift instrumentation. Somewhere in the middle of the movement the rather memorable line ‘like a duck in the middle of a storm’ rather caught my ear.

And so onto the last movement – ‘Thunderstorm’. This of course takes the well-known thunderstorm at Woodstock as it’s jumping off point. Excerpts used include the famous massed ‘no rain’ chant from the crowd. ‘Thunderstorm’ is huge, there are layers of sound at the start moving to a piano and voice section. And suddenly there are strings – they sound somewhat cello-ish to me. And I’m going to stop describing it there, the thing is that this is so big – it’s 9 ½ minutes long that describing it would just take vast amounts of text, so let’s just stick with largely layered and textured musically.

With ‘Biblical – Epical – Thunderstorm’ MOONFLEET have produced something that is absolutely incredible. It’s not background music, it deserves to be listened to closely. Musically it’s lovely, the playing and production are spot-on. It’s the sort of thing you can listen to again and again and again and spot something new every time. The way the movements shift in feel is mesmerising. And as whole the three movements hang together so well.

The EP is available on most major streaming and download platforms.

Though MOONFLEET started out as an instrumental solo project, the goal has always been to form a large ensemble post-rock band with heartfelt lyrics and powerful crescendos.

With a passion for orchestral instruments and a political drive that would smash the windows of the houses of parliament, MOONFLEET’s songs comprise of musical movements that aim to bring something completely different to the Leeds & Yorkshire music scenes.

After a short stint as a performing band and in May of 2019, releasing their debut EP Biblical – Epical -Thunderstorm MOONFLEET composer Jake Wilson has refocused his efforts towards the future of the project.