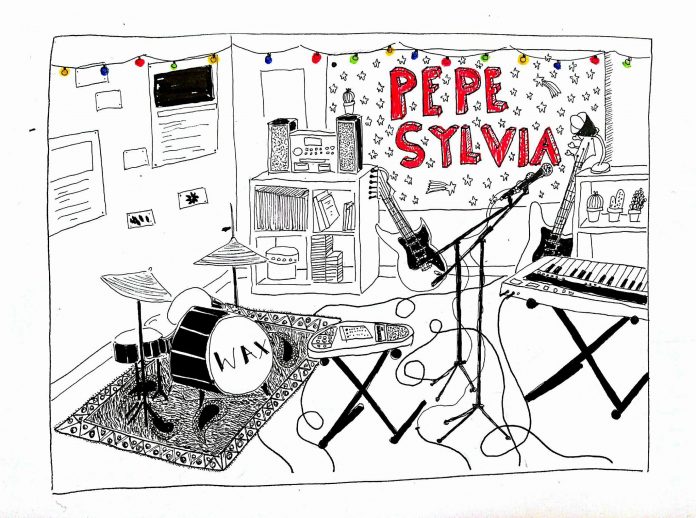 I can’t put this off any longer. For the past hour I’ve been looking at the Soundcloud page that this is on thinking ‘I’ll listen to it now’ and then finding yet another reason not to do that. To be quite honest it took me over an hour before I even clicked on the link from their Facebook post to Soundcloud.

‘So Frank, why is this happening?’ you may (or may not depending on whether you have any interest in this) be saying. I think what I’m doing is trying to reproduce what happened when you had to actually go into your nearest record shop to actually buy things on vinyl, and one of your favourite bands had a release out that day. First you had that anticipation of knowing it was going to be there at the end of your journey, then you had the return journey time to study the sleeve, look at the song titles (and try and work out whether any songs you hadn’t already heard were going to be good). Then you had that period when you tried to slit the shrink-wrap perfectly so – in the case of non-gatefold sleeves – the record was actually protected. And then after one final read of the sleeve and an attempt to work out what the sleeve told you about the music and where the band’s heads were at the time, you might actually listen to it. With digital streams and downloads there isn’t that quite delicious delay.

And yes, as you may have already worked out, Pepe Sylvia are one of my favourite bands. This is a band that I have seen live exactly once (they mainly play in Leeds and I can’t get back home from gigs in Leeds the same day on the train, I’d need to stay over and right now I can’t do that) and only heard the two releases they’ve put out but I have become quite, let’s say, obsessed with. I feel about them the same way as I did with say The Ravishing Beauties (you can read my column about The Ravishing Beauties here) way way back then (and strangely there are some hints of The Ravishing Beauties in Pepe Sylvia, it’s the vocals I think). It doesn’t feel exactly seemly for somebody of my age (and no, for the 100th time I’m not going to say how old I am) to be ‘in the throes of fandom’ but there it is, I’m not sure I really care.

So, that said, on with the review – and it should be noted that I’ve not as yet actually listened to the EP. It helps that there are two songs I’ve heard before – ‘Hannibal’ and ‘Wax’. There is a track, ‘Rotten’, I may have heard or not heard live. But these are wrapped up in intro/outro and interludes. There will now be a gap while I actually listen to it, I’ll be back.

I’m back and I am completely overwhelmed by the music on this EP. It has left me feeling either happily sad or sadly happy, it’s really hard to pin that down. And I’m almost too embarrassed to say but I actually have tears rolling down my face. This is achingly beautiful. I am so overwhelmed that right now I can’t actually say any more, I might need to take a short break while I work out what to write.

A short while later

So I’ve listened to the EP some more and I’m still not sure that I know exactly what to say but here goes. The songs and intro/outro and interludes work as one seamless piece (on Soundcloud there is this small gap between them but I’ve managed to tune that out).

The intro could really be described as a soundpiece (as could the outro and interludes), this is an extraordinarily evocative piece that appears to feature a variety of sounds that includes a musical saw (as least I’m fairly sure that’s what it is, I’ve seen pictures of a recent gig which show this). It starts sounding a little like whale music to be honest with these wonderful little sounds that flit in and out, and then there is guitar. It was at this point in my first listen that all I could think was ‘this is so so beautiful’ and I lost it completely.

This blends into ‘Hannibal’. I’ve already reviewed this but this is a good a time as any to think again. It is the most bizarre thing, it almost shouldn’t work, the mix of things on this song. It sounds vaguely folky and Americana-ish at times, and then at others psychy, then sort of post-punk or I’d guess shoegaze. It’s loose but way tight. It has what I will describe as utterly lovely vocals, that shift between perfect harmony and slightly ragged. It even has this sort of trip-hop breakdown and horn sounds. It is, and this will be a theme I’m sorry, beautiful.

‘Rotten’ is dark and brooding. I love and adore the main vocal on this, this isn’t to criticise the backing vocals at all, they’re really really great. It’s sort of stalky in feel at first, it’s all sort of bass synth pads and rattles. And then it sort of explodes into soaring psychy shoegaze-y fuzz with the most wonderful vocals under it.

‘Interlude (ii)’ is back with those whale type sounds. And then ‘Wax’. Now ‘Wax’ is one of those songs that makes me cry around half the times I listen to it. When I said ‘it’s beautiful, beautiful in an epic bringing tears to the eyes way’ in the review I did on it’s single release, I meant it. Actually it’s those builds that do this to me, it’s the power of the emotion in them, and then it’s those vocals right at the end, they finish me off.

It starts quietly, there’s guitar gently picked over some synth and what sounds like the sound of children, and then these breathy male vocals come in. And then it builds to something briefly, the guitar crashes, there are these what I can only describe as weird warbling synth noises. And then it drops and there’s a female voice with a response. It builds again, there is guitar crashing in, there is some utterly lovely vocals and it fades on washes of synth. And those builds are epic. It appears to be some sort of ‘there’s two sides to every relationship (breakdown)’ story. But what it sounds like mainly is the sound of something hugely sad going on. There’s something in the arrangement and the vocals that just grab at your heart.

The ‘Outro’ is the strangest thing I’ve heard in a long long time. It sounds like sort of 1920s/1930s music played on modern day instruments – bar the musical saw of course. It is weirdly very moving and sad.

Trying to sum it all up

Pepe Sylvia’s music sounds like nothing I’ve heard before, but then again there are hints of lots of things I’ve heard before – folk, country, post-punk, shoegaze, bits of psych, 80’s classic pop, 70s ballads from big AOR bands (oddly that’s what I get in places), those sort of loose 80’s Peel type bands with female vocalists, weird electronica – but these are all filtered through what I now call the ‘Pepe Sylvia’ thing. It’s loose but tight, it’s the way that sounds are put together,. It’s the way the songs are put together with such obvious care and attention to detail. It’s those oh so lovely vocals.

What comes out of this is something that is beautiful and, here I am going to use a word that I don’t use lightly, perfect. There is nothing you could do to these songs and soundpieces to make them any better.

Pepe Sylvia’s EP is now available on Spotify and all the other normal places you listen to your music.

Pepe Sylvia are launching their EP at Mabgate Bleach Leeds with an EP Launch Party on 24th May. Also playing will be jellyskin (another of my favourite bands), Van Houten and Floral Øpulence.
https://www.facebook.com/events/211539962786333/