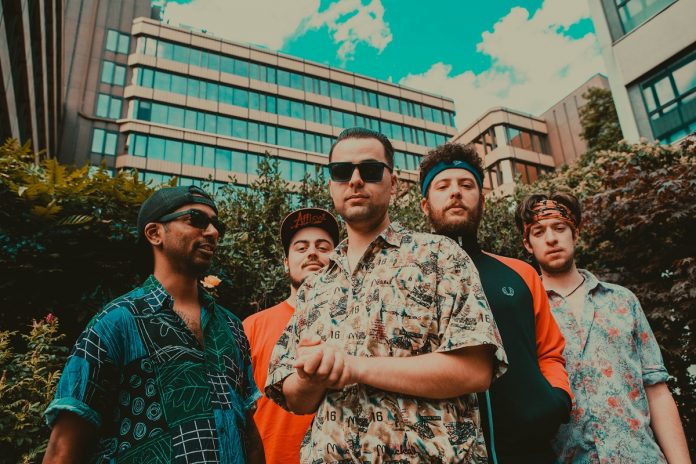 The band’s new EP, ‘In The Night’ will be released on 20th October (via Alya Records). Recorded at Junior Park Studios in their hometown, Sheffield, echoes of its music legends
can be found throughout the EP.

“Working with Will Stocks at Junior Park as a producer is great, as he creates a really relaxing environment where you can indulge your creative side, instead of having to constantly feel like you need to watch the clock,” says Sam.

The band have already released ‘In The Night’ from the EP so this is going to give you some idea of what you’ll be getting from the other four tracks. And I say ‘some’ because actually there’s a variety to the tracks that I find refreshing. All too often bands stick to one sound.

One thing you’re going to get is a distinct 80s electronica vibe to the tracks, it’s bought bang up to date but there is that feeling there. The vocals on some of the tracks had me flashing back to Heaven 17. The band themselves label their music as ‘northern dark pop’. I get the use of ‘pop’ but some of this doesn’t sound particularly dark. It’s ‘pop’ for me in that way that Heaven 17 and ABC were labelled as pop in the 80s. So don’t you go letting that use of ‘pop’ lead you into thinking this isn’t worthy of your attention.

‘In The Night’ is a strange one. It’s like a 70s soul track that’s been sprinkled with electronica. So on the one hand I’m back in the seedy ‘disco clubs’ I frequented in the late 70s – usually trying not to be beaten up by sailors on shore leave (but that’s another story) – but on the other I’m hearing all these bang up to date sounds. It’s confusing, it’s weird, it’s actually quite compelling. I have a particular fondness for the guitar sound in ‘In The Night’, it’s that thick chewy tone. Anyway I can let you hear this one.

The next track ‘Question’ I’m really not sure about at all. It treads much the same musical path as ‘Into The Night’ but, and it’s a big but, the band have decided to throw in these rather jarring vocal sections. These rather disrupt the smoothness of the rest of the track. I think there is the intention to have this voice act as a character in the song but for me it doesn’t quite work. It feels awkward.

‘The Wave’ is a rather beautiful piece of atmospheric electronica. I like this a lot. It’s layered keyboards, weirdly warped sounds, vocals blending in. It has this rather lovely shambling slightly Madchester thing going on. One of the EP standouts for me.

‘Not Over You’ is another of my favourites. Musically there are all sorts of things going on. Synth runs you just wait for. Little sounds in the background. Some quite wonderfully sparse drumming. Sam’s vocals are great on this. If you really had to reach for a FFO I’d say Heaven 17, but this is because it has that ‘big epic but sparse sound’.

I had to listen to ‘Glory’ several times before it really hit me, but for me, it’s the main reason you might get this EP. It’s big, it’s epic. It’s all sorts of influences blended into one fantastic whole. I’m a young person of the 80s so I hear early Human League, Heaven 17, ABC, The The in the mix. What this isn’t, even though I hear these influences, is mere copyism. It’s utterly original.

So what we have here is a collection of pop, classic pop. The sort of pop music I used to love, the sort you don’t get that much any more. It’s pop that isn’t throwaway, pop that is crafted, extremely well played and really well produced. It has that ‘this is too good to label as pop’ feel to it. Yes there’s one track I’m not keen on but that’s one track out of five, and others may well love it.

Vuromantics ‘In The Night’ EP is available to pre-order now at: https://www.musicglue.com/vuromantics/shop

Although brothers Sam and Jake initially intended to team up and write songs for the sole purpose of synchronisation in TV and film, they quickly realised the desire to play live couldn’t be ignored. Their sound built for a live setting – having consistently toured since March this year from the north to the south of the UK, Scotland and Wales – all before playing in their hometown.