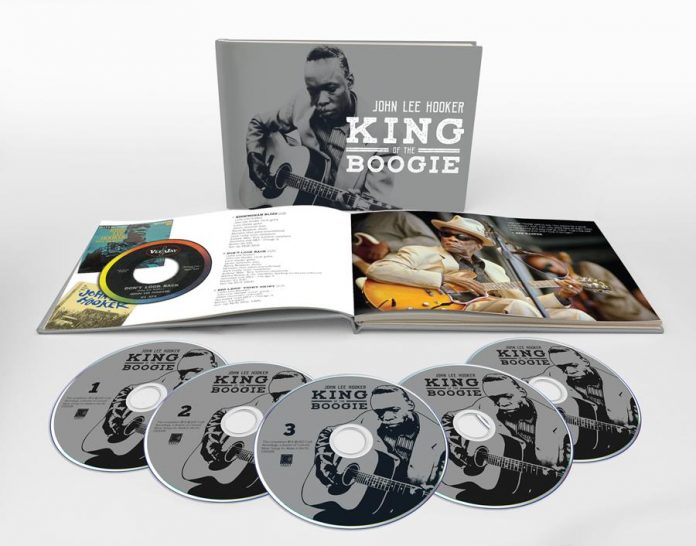 Craft Recordings, the Catalog division of Concord Bicycle Music, has announced the release of ‘King Of The Boogie’, a career-spanning retrospective, honoring blues icon John Lee Hooker. Due out 6th October, the five-CD set delves deep into the catalog of the influential artist, featuring not only his iconic hits, but also rarities, live recordings and several previously unreleased tracks. Housed in a 56-page book, the collection includes a wide selection of photos, taken throughout the musician’s life, plus new liner notes by writer and John Lee Hooker historian Jas Obrecht, as well as by the artist’s longtime manager and friend, Mike Kappus.

John Lee Hooker (1917-2001) was born 100 years ago, near Clarksdale, Mississippi to a sharecropping family. Throughout the years, there has been some academic debate about his original birth year. However, The Hooker family maintains 1917 as the de facto date. Says daughter Zakiya Hooker, “As we all know there was no great push for accuracy back then in that portion of the community. But we just stick to what my father told us, which was what he was told by his mother.”

As a young man, Hooker worked his way up north to Detroit to pursue his passion of music. By 1948, the artist had a hit on his hands with one of his earliest recordings, ‘Boogie Chillun’’. From there, Hooker would record over 100 albums throughout the course of his six-decade-long career, building a diverse collection of fans along the way: from folk musicians and beatniks, to the stars of the British Invasion. The Rolling Stones, Eric Clapton and Carlos Santana are among those who cite Hooker as a major influence. In his liner notes, Mike Kappus recalls that, “Everyone who knew John Lee Hooker loved him and felt privileged to be in his presence. While he influenced generations of musicians with his incomparable style, that impact on musicians stepped up to yet another level once they got to know and, universally, love him.”

In his later years, as the bluesman found himself in one of the busiest, most productive eras of his career, Hooker was inducted into the Rock & Roll Hall of Fame, Blues Hall of Fame and Memphis Music Hall of Fame; was honored with a star on the Hollywood Walk of Fame and took home four GRAMMY® awards, including a coveted Lifetime Achievement award in 2000.

Tasked with narrowing down Hooker’s vast catalog into five CDs, box set producer Mason Williams curated the collection to narrate the artist’s story. “Even at 100 songs, this set is just a snapshot of John Lee Hooker’s incredible and influential career,” says Williams, “but one that takes you on the long journey he took from his early days in Detroit, to his time in Chicago recording for Vee-Jay Records and up through his later collaborations with Van Morrison, Bonnie Raitt and Santana, among others.”

‘King Of The Boogie’ will be released as part of a year-long, multi-partner centennial celebration, honoring the music and influence of John Lee Hooker, and will be a companion piece to an exhibit of the same name, which kicks off today at the GRAMMY Museum® Mississippi. John Lee Hooker: King Of The Boogie includes Hooker’s performance outfits, guitars, photos, awards and, of course, his music. The exhibit will be on display through February 2018, before traveling west to the GRAMMY Museum® at L.A. LIVE. Additional centennial partners include The Blues Foundation, The Delta Blues Museum, Living Blues, Oxford American, the John Lee Hooker Estate, and Epiphone Guitars, who will be releasing a limited edition John Lee Hooker Zephyr Outfit, available in early 2018.