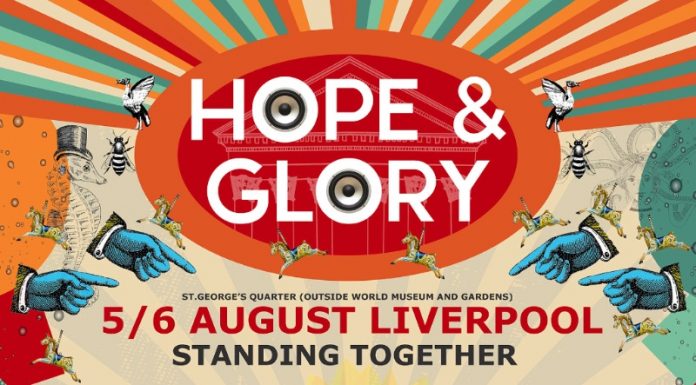 HOPE & GLORY is taking over Liverpool’s city centre, hosting an array of live music and entertainment across the weekend of the 5th and 6th of August with a line-up that includes Manchester headliners James and the 70 piece orchestra Hacienda Classical with fellow Mancunian special guests Shaun Ryder, Bez and Tim Booth.

HOPE & GLORY Festival Promoter Lee O’Hanlon said: “I have lost count the number of times I have attended shows at Manchester Arena for professional purposes and personal enjoyment. I attended the vigil the following night in Albert Square and then attended the Simple Minds concert in Manchester that same night. I was moved like I never have been before. The defiance and strength the people of Manchester showed that night and in the days after the attack was the most powerful thing I have ever experienced. The images of children and young parents broke my heart so goodness knows what the families are going through. I can’t begin to imagine.

“I just want us to be able to support the friends and families of those injured or who lost their lives as well as the emergency services that supported them, in any way we could. As a North West Festival with two Manchester artists as our headliners, the choice was simple. It’s simply doing what we can, standing with Manchester. These people want to change our way of lives. I grew up on the music of the North West. These people are strong and if we can help them a little then we will.”

Lee O’Hanlon’s business partner, Iain Kerr concurred: “Lee suggested that we donate profits from the festival to the cause and I knew in an instant it was the right thing to do.”

The festival which boasts a host of artist from across the north and wider UK is set in the heart of Liverpool behind St. George’s Hall, in St John’s Gardens and William Brown Street where 12,500 fans can enjoy the festival while indulging in the stunning Victorian backdrop of the World Museum and City Library. A specially created arena will be home to the festival – all within a few hundred yards walk of the main Lime Street train station.

Fans from across the North West will be able to attend each day with the festival finishing in time for the last trains from nearby Liverpool Lime Street Station.

FULL LINE UP AND STAGE SPLITS

HOPE & GLORY also features an abundance of entertainment across the site with Spoken Word performances, magic shows, comedy and acoustic acts plus extravagant and outrageous side-shows and so much more fun for the whole family to enjoy.

Featuring spectacular entertainment including Football Legends charity darts match, Charlotte Church in conversation with renowned journalist Simon Price, Celebrity Charity arm wrestling, The Victorian Acrobatic Team, The Liverpool International Air Guitar Competition, Harminder the Elephant, Dinosaur Baby in the Pram, Dance of the Lobsters and The Woman Who Grew Up Into A Tree.