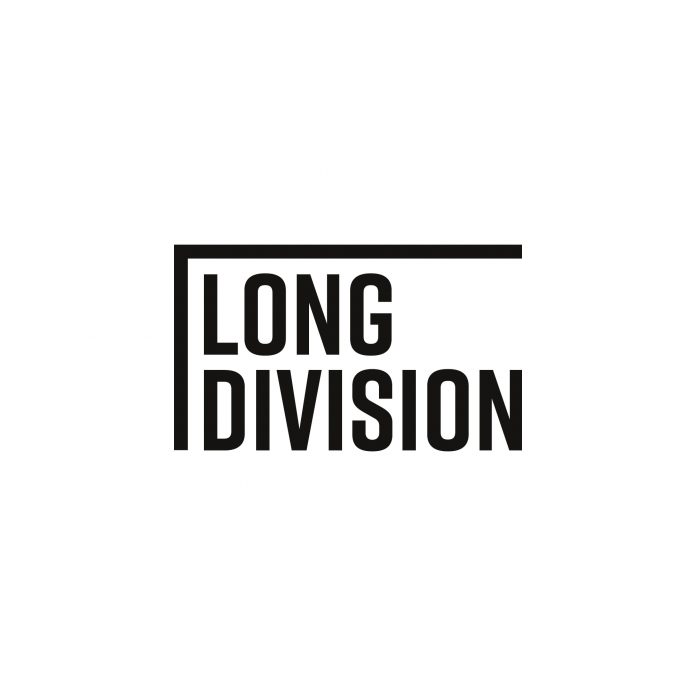 When I arrived at Long Division I had a plan of which bands and artists I would see; with, of course, an emphasis on Yorkshire bands. That plan fell apart almost immediately; firstly because I decided impulsively to stay on at my first venue to see a band whose release I had reviewed, and secondly because a number of acts had pulled out. Acts pulling out isn’t of course uncommon in this difficult ‘Covid times’.

As a result my festival experience was rather more random than I had originally planned; but somehow this made it all the more enjoyable and ‘festival-goer’ like rather than reviewer like.

My first artist of the day was Mayshe Mayshe. I’ve seen her play live before but in between then and this gig I was part of a special Zoom based session where she played some songs and talked about them too, so I came with an insight into her music. 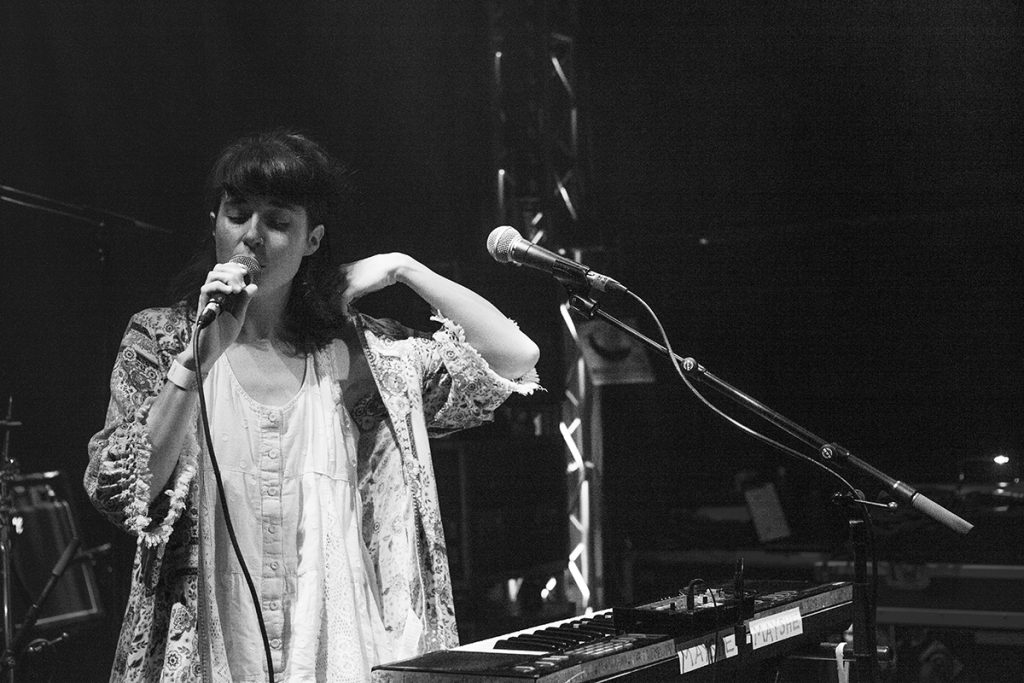 Mayshe Mayshe magically weaves her multi-layered songs together. She uses vocal loops, synth patterns, beats and even, for one song, the sound of a hairdryer. The key thing is that the songs are ‘constructed’ live but unlike some other artists who use loops, if you didn’t see her doing it you wouldn’t know.

Her songs come with more than her obvious technical expertise; they come with emotional depth, and an organic feel. They are all about mood and atmosphere. And on top of this are her vocals; her vocals can be moody and dark or sometimes playful, but always compelling. And her words are ones you need to listen to, her words are great. 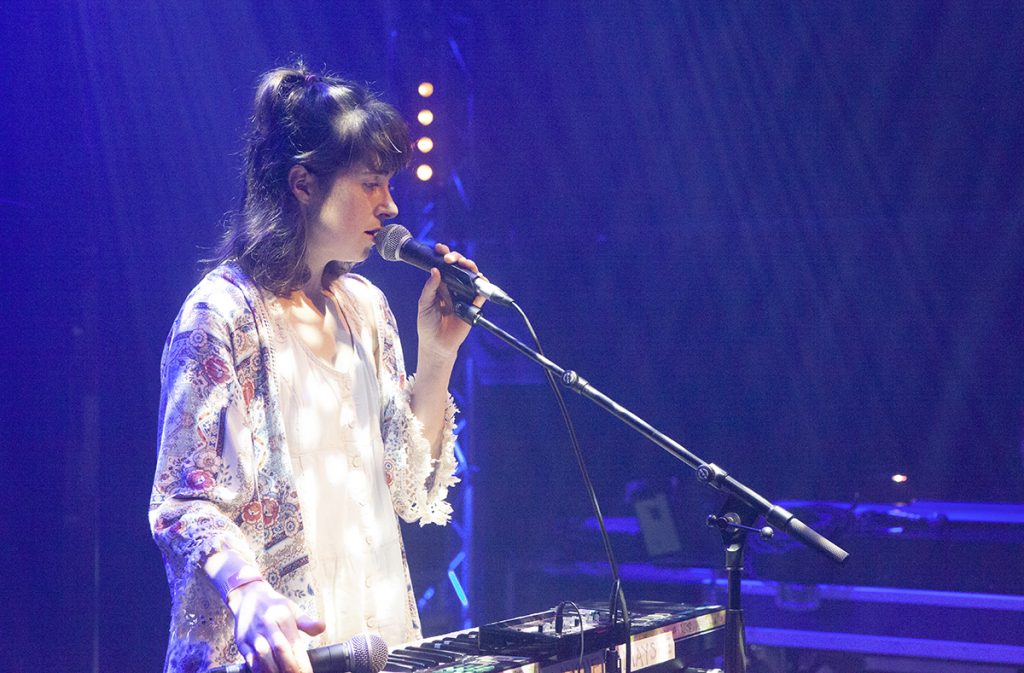 The experience is mesmerising and, for me, meditative. Her music is immersive. Her performance is low-key, and all the more effective for that. Her music is music to listen to and be taken by, you need to let yourself be drawn into it.

Next up, a change of mood. In The Morning Lights make great classic dance-y pop; done with style in spades. They have that smoky late night slightly retro feel and sound that’ll have you dancing all night long. Their sound is joyful, you can’t resist a bop, this is great good time music. 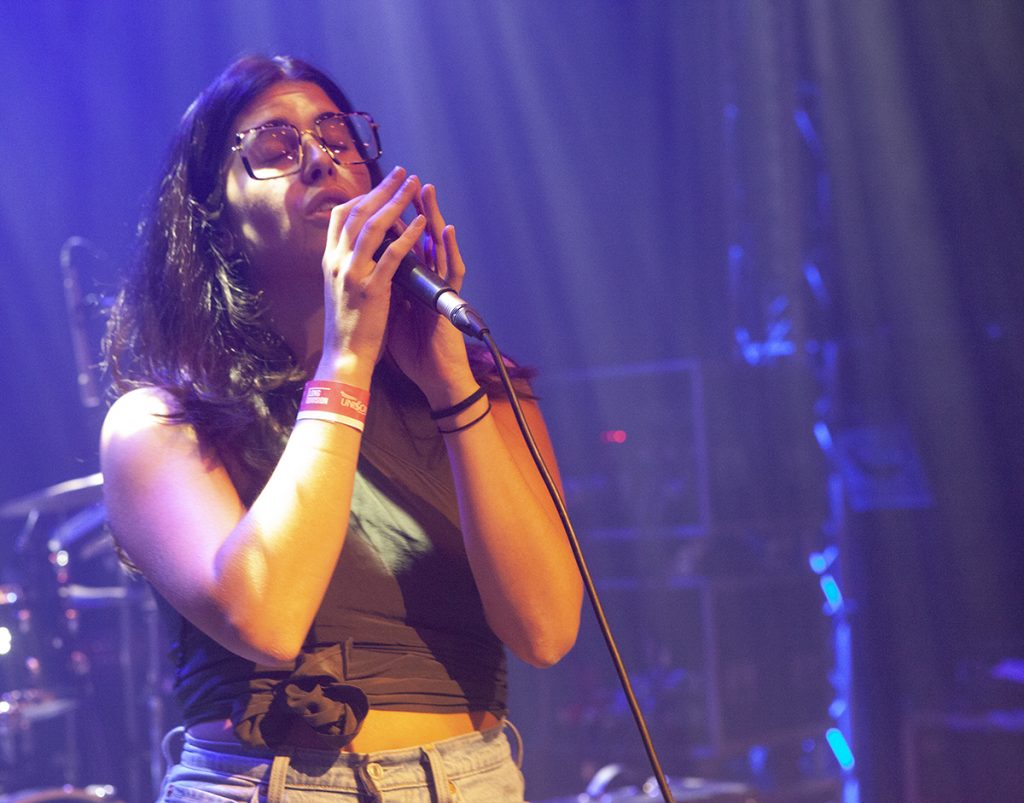 They’re a three piece – great vocals, bass and drums plus some sounds that I assume are programmed or triggered. But it’s an example of just how good music can be when it’s basically simple but done so well.

They play their upcoming single release – ‘Gemini’ – and this, people, is one to check out. Too too good. 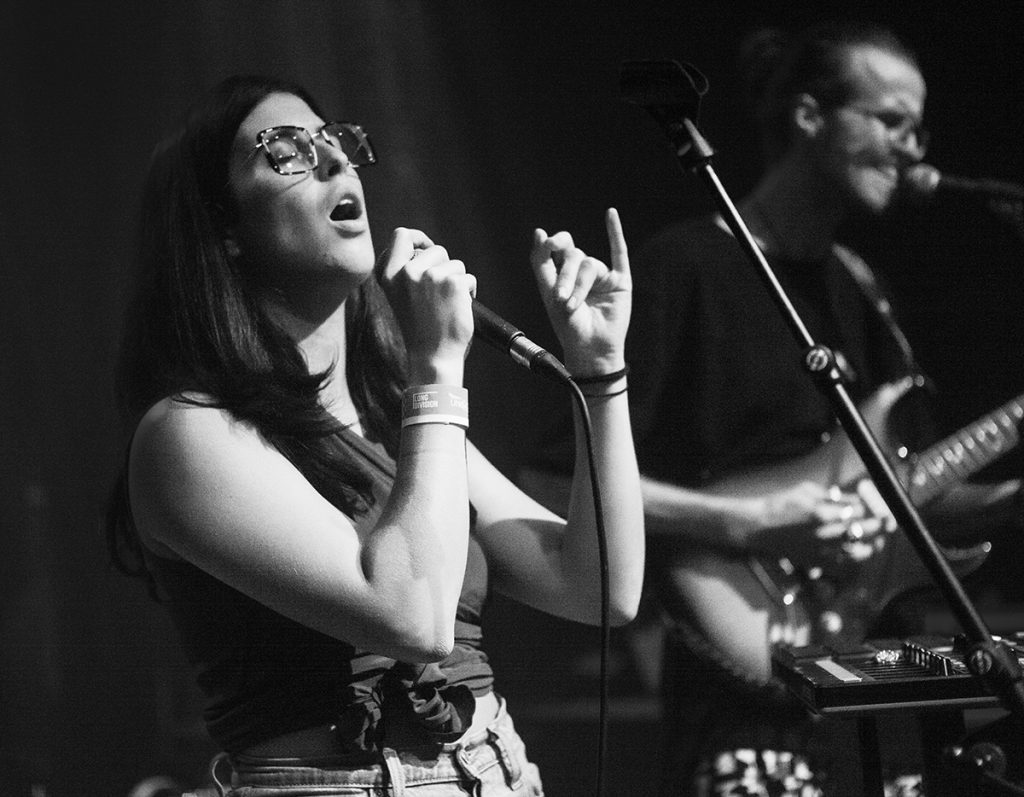 And this is a band who can mix up, they can do rocky sounding, but still danceable and this is unexpected and fantastic.

You want a good night out, go see In The Morning Lights.

Having walked down to another venue to see La Rissa, I discovered that they were not playing but had been replaced by Lucky Iris. An unexpected and wonderful surprise. I’ve loved their releases to date (and for that matter the band that the two of them – Maeve and Jasper – were in before, Everyday People). This was only their second gig but you’d never believe it, the performance was so smooth and assured. 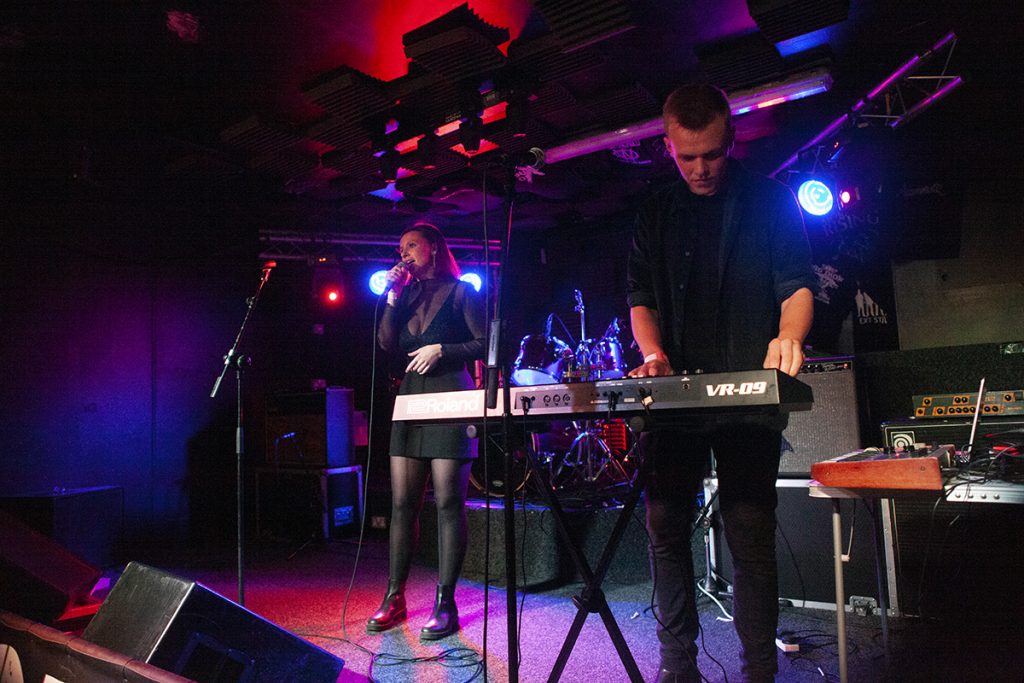 Referring to my somewhat gushy notes made during their set I said that ‘compared to the recorded material live Lucky Iris are a more soul-y experience’. This comes from Maeve’s voice which is way up front and beautiful – she has a voice I could happily listen to all day. Live, she really let’s that voice soar.

There are songs I haven’t heard like ‘Tick Tock’ with a hard hitting beat-y feel and a groove to die for. And this is just one in a set that goes from pop to dance to jazzy NuSoul. The duo just don’t do same-y. And for an act that features what are obviously programmed sounds the feel is organic. 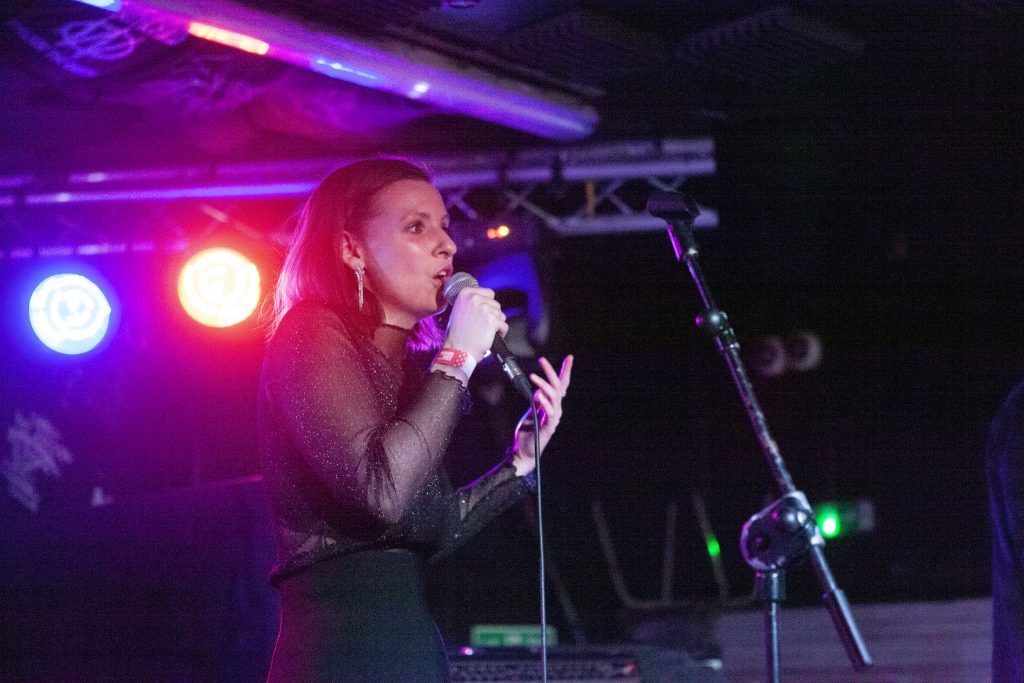 There is the preview of a new release ‘Speak Soon’ (due in around a month). It’s got a great groove and a soul feel. Catchy as you could ever want. Just a lovely thing.

Lucky Iris do wonderfully put together songs with great words; if that’s your sort of thing go catch them live.

During a festival I always pick an act at random, and then do absolutely no research about that act if it’s one that I’ve never heard of before. My random act for LD was August Charles, and I have to thank the musical gods for taking me to him. 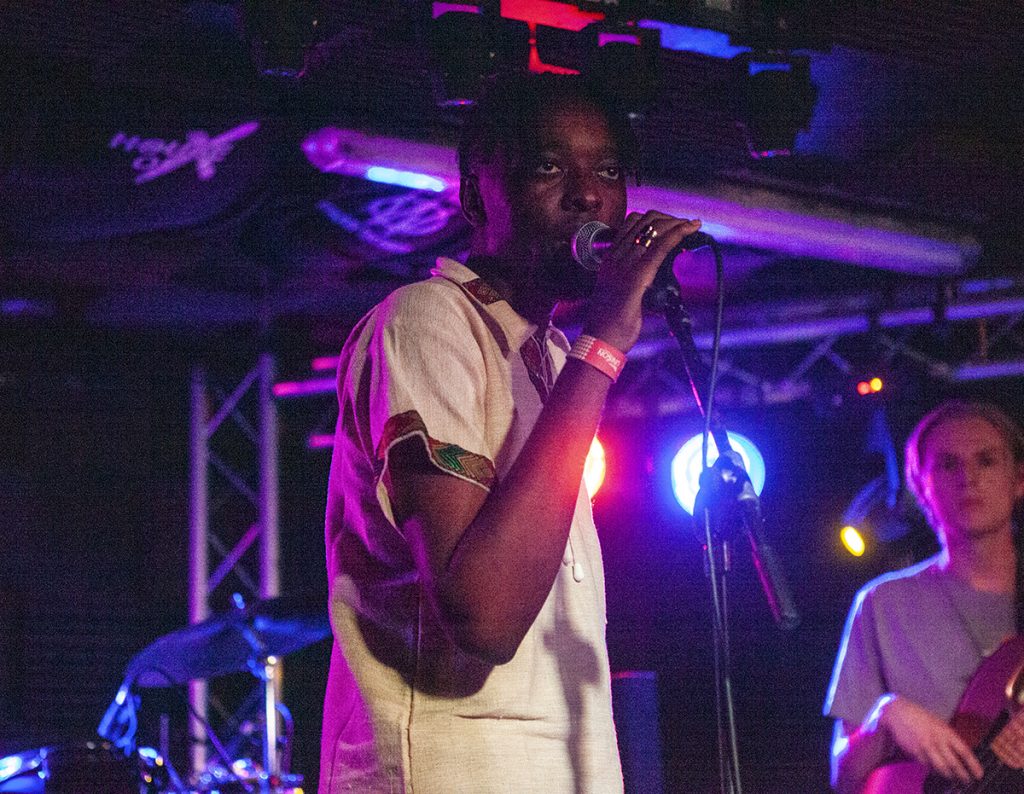 This was a performance that would have been stunning in a large concert hall. In the small room at Vortex it was jaw-droppingly fabulous. The music, played by an awesome band, is jazzy, with at times doses of R’n’B, soul and blues. And before I go on I have to do a shout-out for the guitarist who peppered the songs with outrageously good solos.

But it is August’s voice that stuns. He ranges from almost Tom Waits bluesy growl to falsetto, and everything in between. His voice was so good it actually brought tears to my eyes.

But this is a performance, and August is the full package. Songs come with introductions that are funny or heartfelt. And all of us feel a connection to him. Frankly he could have sang the phonebook and it would have been wonderful but obviously he didn’t. He sings songs which match the quality of the performance. And yet he doesn’t just sing these songs, he performs them. 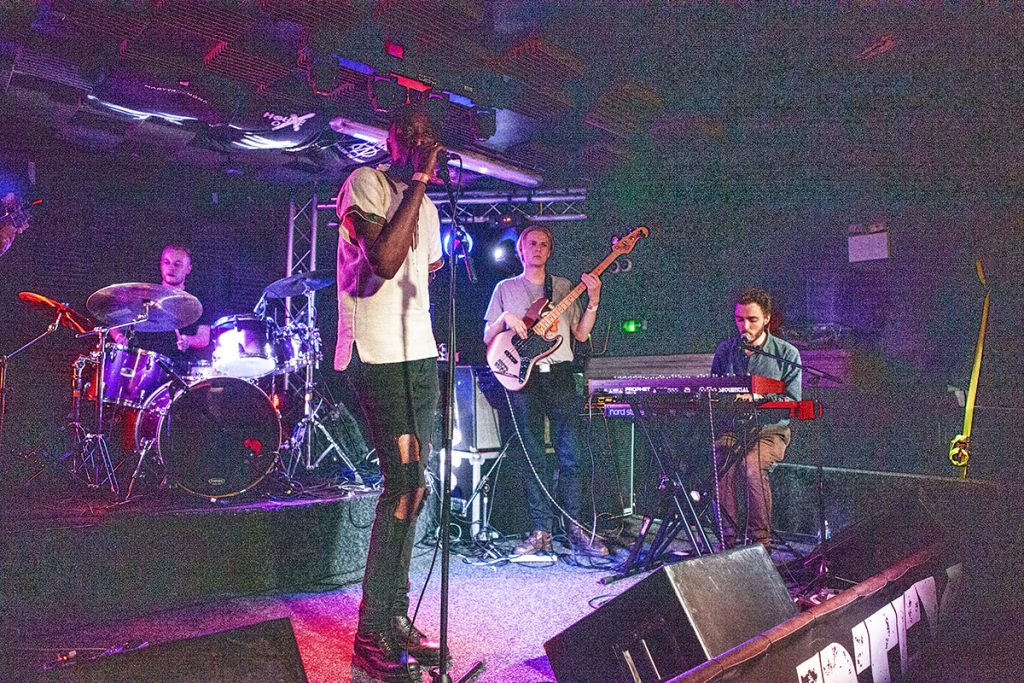 It’s just the most beautiful experience. August Charles is someone I want to see again soon, and if you know what’s good for you, you should too.

So at last I get to see The Sunflower Thieves having gushed about their single releases for ages. For this performance Amy and Lily – who both sing and swap between guitar and keyboards – are accompanied by two guitarists who also provide backing vocals. 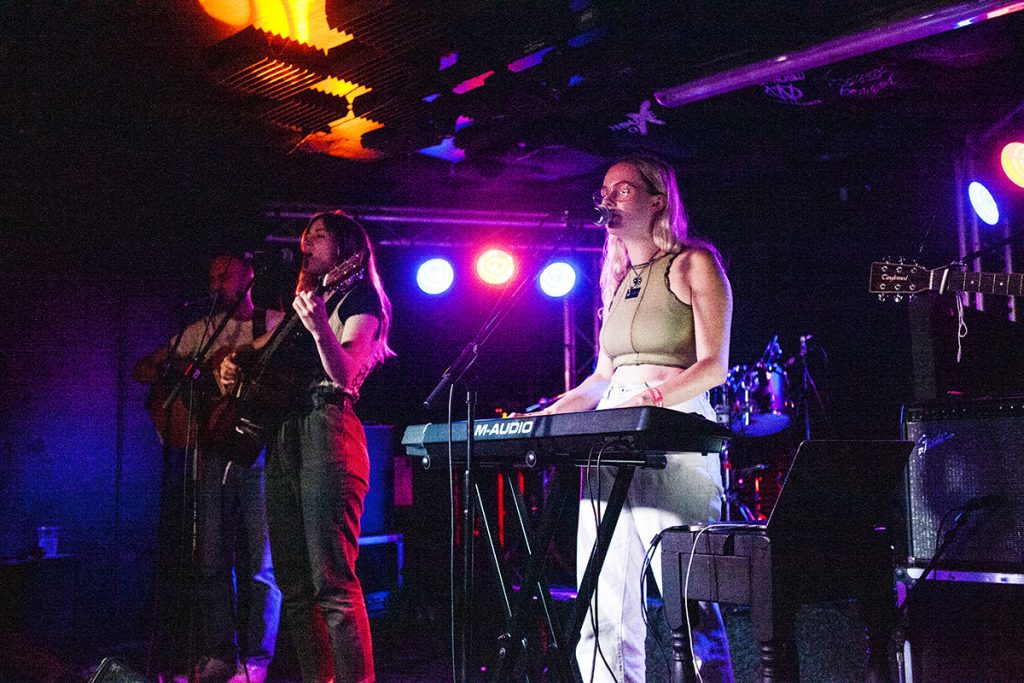 Chatting to the two of them briefly after their set I found that this line is one of the possible performing formations they are going to be doing in the future. The others being a band with drums and bass, and of course, the two of them.

For those of you who don’t know the Sunflower Thieves they write and play what I’m going to call folk influenced pop. Although what genre they fall into isn’t that important, what matters is that the songs are beautiful.

For me Sunflower Thieves’ songs are all about the vocals – vocals that weave and harmonise. Having four voices on hand (so to speak) with the three acoustics at times had me thinking of Crosby, Stills and Nash or The Mamas and The Papas. So the vocals are there and they are as beautiful as I had expected. What I wasn’t expecting was the songs being presented this way. This meant that I had to let the set percolate in my head for a while. So that’s what I did.

A highlight for me is the two of them singing their first release ‘Two Halves’. Much as I loved the four voices, their voices together are so wonderful. The effect is more than two voices, I don’t know how they do it but it sounds fuller than just them.

The thing is that the songs still retain their beauty, their meaning. The voices I love are still there. And a mere 30 minutes after their set had ended I was wishing I could hear it again. Sometimes it just takes my older head a while to process things; especially when things are not exactly what I expected.

It is a mark of how well their songs are written that they can be performed differently. It’s the same words and tune but the different performance brings out different things. Performed this way they sound more folky than poppy; and perhaps sound more like they do when they write them.

Look I’m talking around it here but I really did love hearing and seeing this set. And it is with a degree of sadness that I have to admit that it didn’t quite click with me immediately.

And so to my final band – bdrmm. I’ve heard of the band, I’ve even taken a quick listen to some of their music but it didn’t prepare me for what I saw and heard. 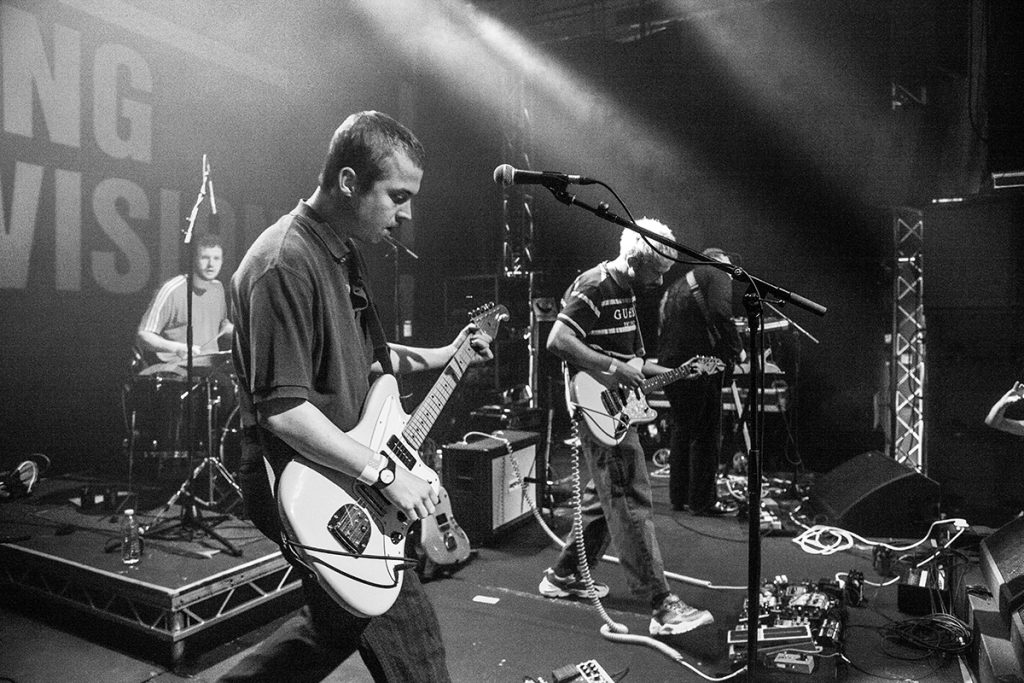 I’m going to reproduce my actual notes here, just so you know what this band did to me:

‘I’m going to use the phrase ‘vast and hugely textured to describe what they do.

‘Shoegazy, post-punky. Compelling and hypnotic, their music comes with an almost religious feel or, at the very least it’s the soundtrack to a ceremony.

‘And yet they can go suddenly almost too happy, happy with an edge of craziness that is almost frightening.

‘Layers of overwhelming sound build on each other. Guitars that are either in feedback or right on the edge of it bore into your ears. Layers of other sounds below the guitars pound into like a tidal wave until you are drowning in sound. 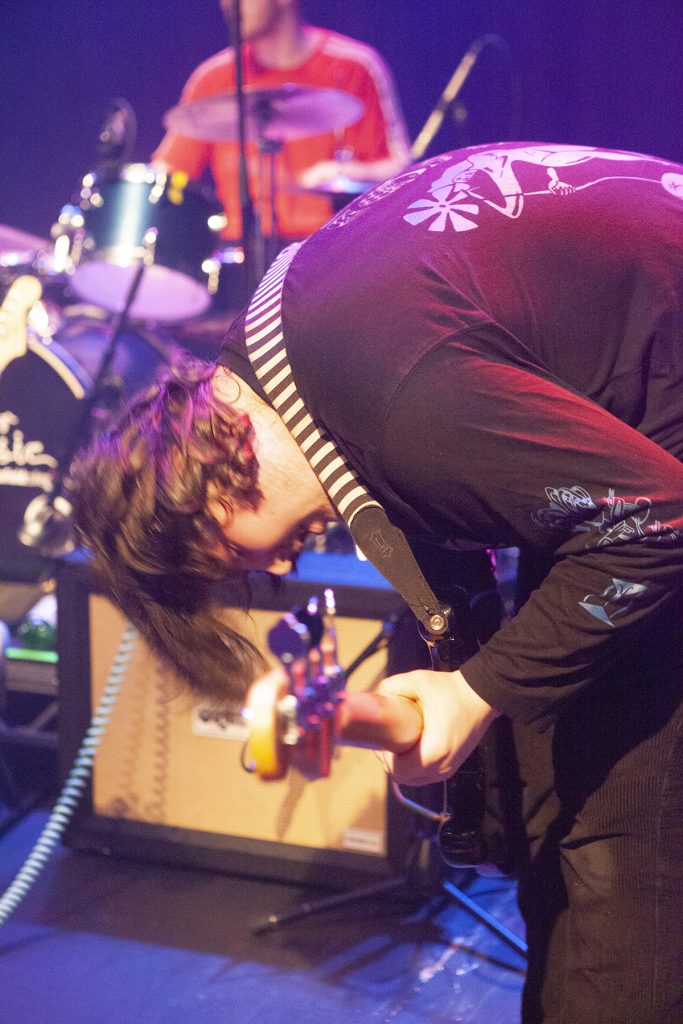 ‘And there are vocals, vocals that have effects layered onto them; to the point where you don’t know whether there are words or not. They because another layer of sound that punishes.

‘The band play with short gaps between songs, so short that each song seems to leak into the next. You are still hearing the previous song while the next is starting, 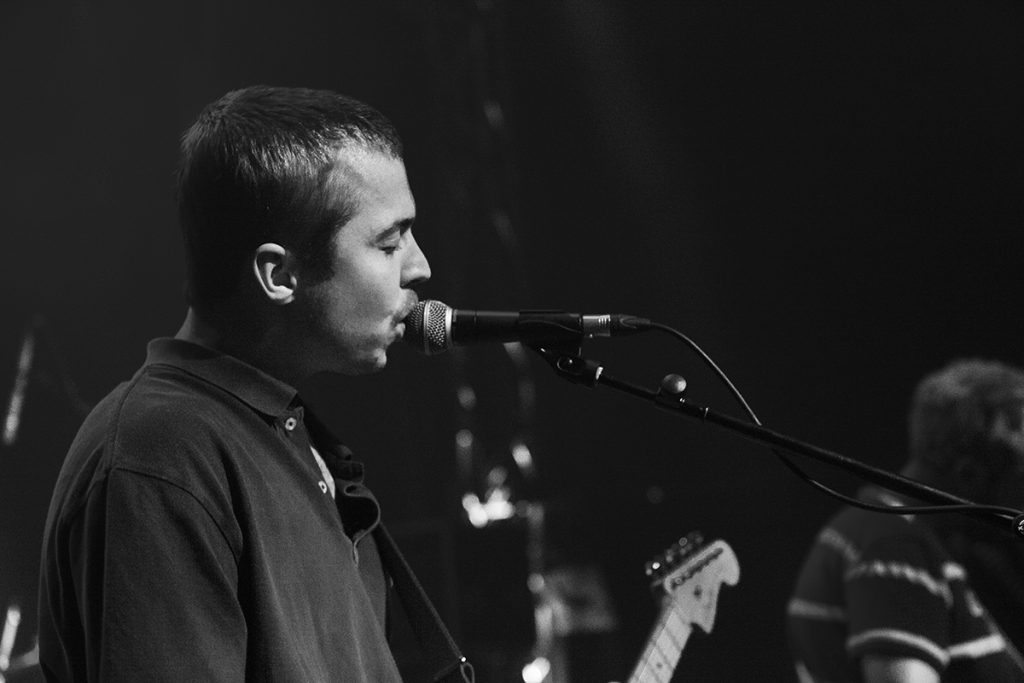 ‘The combination of all of this is almost too much, the pressure overwhelming but wonderfully disturbing as wave after wave of beautiful sound breaks over you.

‘And it’s glorious, it drives you into sonic ecstasy, and you pray for it never to stop. 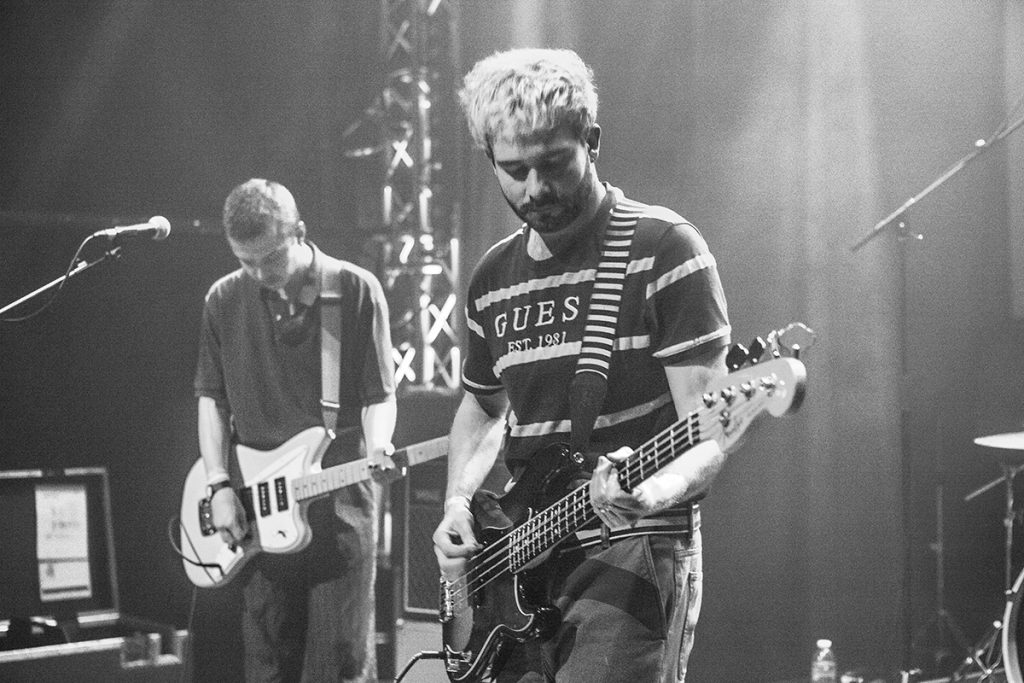 ‘And visually the band reflects the music; they twist, they stalk, they contort themselves into positions where it would seem impossible to play.

‘They prepare to end the ceremony with a track that starts with soaring synth, gentle soothing guitar. Yet you are on the edge, you anticipate the build. And then it comes, not speeding up, but layer upon layer of feedback is added, the pressure building unbelievably until it ends, the pressure is released.’ 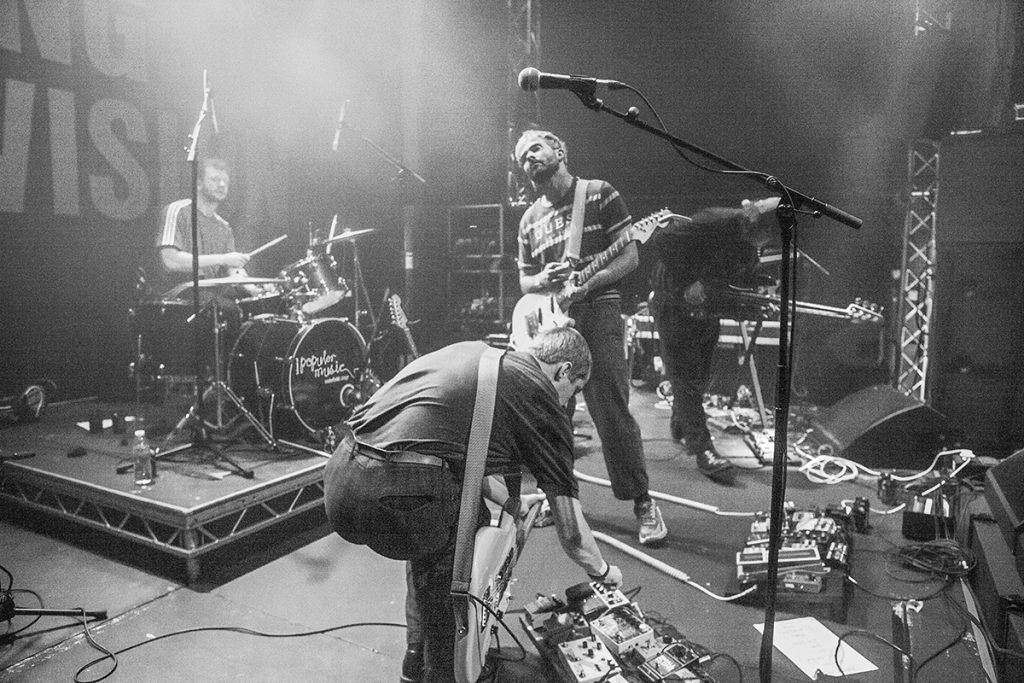 So you see what their set did to me. The experience was so intense it almost hurt, and the sound did, at times, hurt. But it’s an experience I want again.

The thing is that this isn’t just thrash and feedback. In all of that sonic warfare there is structure, there are obvious signs of it being carefully put together. There are tunes in their songs. And it’s this that makes it so good.

All photos on this page © Frank Roper Photography