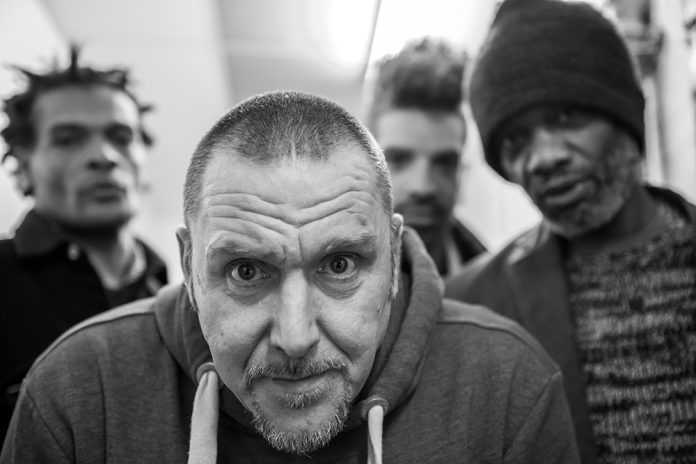 “It felt like they were pioneers of something we’d not had before.” – Clint Boon (Inspiral Carpets)

“Loved the Dust Junkys, Manchester got it. But London didn’t…That’s our loss” – Alan Mcgee

Following on from their unmissable comeback performance at last year’s Moving Festival, the pioneering cult outfit are back and with unfinished business as they bring their “Not Quite Done & Dusted” tour to Academy 3 on Saturday 22nd April 2017.

Following a stint fronting 808 State to two Top 20 hit singles (“The Only Rhyme That Bites” and “Tunes Splits the Atom”), Nicky Lockett founded Dust Junkys in Manchester in 1995 as he sought out accomplished guitar-based backing for his bar-spitting excellence.

Boasting top tunes and an enviable live reputation, Dust Junkys quickly established themselves as a cult favourite in the Northwest. Turning heads with striking TV appearances on the likes of TFI Friday, cover splashes across some of the era’s leading pop culture magazines, and not to mention rampant festival sets at Glastonbury and Reading Festival, and soon enough the rest of the nation had caught up.

Snapped up by the Polydor label in 1998 for the release their critically acclaimed “’Done and Dusted” album, the Junkys’ reeled in a loyal and dedicated fanbase with a string of scintillating singles including “What time is it?”, “Nothing Personal” and “Non Stop Operation”.

During their five years together, Dust Junkys toured extensively, supporting artists such as Fun Lovin’ Criminals and Black Grape on their European tours, whilst packing out innumerable headline shows of their own. Over one twelve month period the hard grafting band played no less than 315 live shows, a statistic that no doubt contributed to them being hailed as one of the best live bands in the UK.

Coupling a tireless attitude to touring and an effortless knack for sonic innovation, the trail blazed by Dust Junkys during their short but inspiring career earned them much respect from their musical peers. With a fan in Fatboy Slim, in 1998 the superstar DJ would in turn provide the band with their biggest hit when sampling their Rinse (Beatbox Wash)” as the backbone for his global smash “Gangster Tripping”.

As such, the reformation of the Dust Junkys for live shows in 2017 has already been warmly welcomed by the likes of Alan McGee (Creation Records), Bez (Happy Mondays), Terry Christian, Graham Massey (808 State) and many more. Capturing the mood aptly, Inspiral Carpets man and Radio X DJ Clint Boon states:

“The Dust Junkys were, quite simply, one of the best live bands I ever saw. It felt like they were pioneers of something we’d not had before. Rappers just weren’t fronting rock bands in 1995. Nicky Lockett was. Great to have them back. Rinse it boys!”.

Dust Junkys will be joined at their Academy 3 show by an aspiring band very much cut from from the same Mancunian cloth: THE BRAKES. Familiar faces to many on the scene already, the quintet have gigged relentlessly around the city over the last few years, pricking ears with their hook-laden indie rock laced, brimming levels of Mancunian swagger and an energising live show.