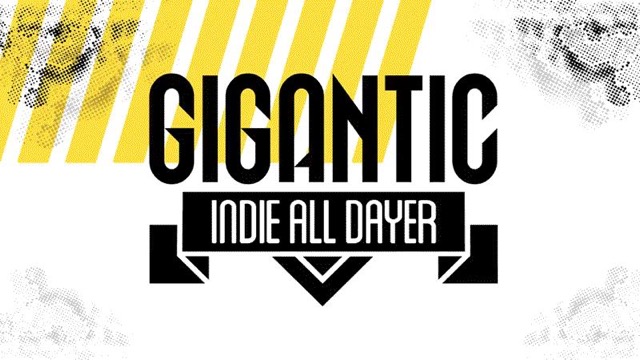 With The Wonder Stuff raising the bar for their successors after a truly roof-lifting headline performance last year, we knew we’d need to find something extra special to match the magnitude of the occasion. It is then with great pleasure; we give you…

Yes, British indie rockers The Wedding Present will be adorning the summit of Gigantic’s 4th volume. With a career spanning over 30 years and a revolving line-up based around founding member David Gedge, this iconic outfit’s mammoth back catalogue and range of inspirations
ensure it’s one not to be missed.

As if this news wasn’t already huge enough, The Wedding Present will be celebrating the 30th anniversary of their seminal album George Best with the Gigantic faithful. An erudite, passionate and liberally uproarious release, George Best is surely one of the ultimate indie albums. Self-released in 1987, it set the template for raw twenty-something angst. Perfectly pitched in the sapient wit of a West Yorkshire accent, anthems like ‘What Did Your Last Servant Die Of’ and ‘My Favourite Dress’ quickly caught the attention of John Peel and the nation’s imagination. It’s obvious, The Wedding Present have all the hallmarks of a truly Gigantic headliner.

Year on year, we have invited everyone from the era-defining acts to the unsung heroes that have written their own distinct chapter in indie folklore. And in 2017, our very special guests are a band who shot to prominence riding the crest of the alternative dance scene, we welcome…EMF

Formed in Gloucester in the early 90s EMF, or ‘Epsom Mad Funkers’, burst onto the scene with their debut album ‘Schubert Dip’, a record which scaled to the heady heights of number 3 in the UK album charts. Known for their casual attire and quintessentially 90s headwear, the band made shockwaves after scoring top ten hits with anthems like ‘Unbelievable’ and ‘I Believe’. Even more impressive still, the band topped the US Billboard 100 with ‘Unbelievable’, a feat almost unheard of for a debut single from a non-US artist. The track remains a catchy slice of brilliance that garnered worldwide fame for the band and singer- songwriter James Atkin back in the 90s.

The band were one of fewer than 10 people in the world to have had simultaneous number one hits in the UK and across the pond. It seems ‘Unbelievable’ and its place in indie history remains as impressive as ever. As for 2017, as we invite this seminal act to the Manchester Academy with the ecstatic groove at its core once, you can prepare to experience something truly unique at next year’s Gigantic Indie All Dayer.

POP WILL EAT ITSELF

Extending our reach further than ever before we’ll be bringing in bands from far and wide for a bill that promises to display the best of the genre from across the UK. Hailing from Stourbridge, POP WILL EAT ITSELF, take their name from an infamous line in an NME feature. Renowned as the archetypal grebo band, the group evolved throughout their career to incorporate more sample-drive elements. Their 1993 hit single ‘Get The Girl! Kill The Baddies!’ charted in the top 10 and will be a definitive highlight as the new-look five piece are poised to tear up Manchester Academy next year.

JIM BOB is of course the lead singer of notorious electro punk pop band CARTER The Unstoppable Sex Machine – a socially conscious DIY rock duo from south London who had four top 10 albums (including a No 1) and 12 top 40 singles over a 10-year career. Now flying solo, Jim Bob tours both Carter songs and his own material to an ardent fan base, so expect choice cuts like ‘Sheriff Fatman’ and ‘The Only Living Boy In New Cross’
to satisfy the Manchester masses once again.

Advancing the line up of Gigantic Vol. 4, Coventry band THE PRIMITIVES will be tracing their memorable lineage in front of Academy crowds. The Primitives first found their feet when peroxide bombshell Tracy Tracy was asked to front the band. Not only did she serve to inspire a more melodic approach, which saw the band record massive hits such as ‘Stop Killing Me’ and ‘Out of Reach’, but she also placed the group at the centre of the Blonde-pop movement. Their biggest hit, ‘Crash’, saw chart success on both sides of the Atlantic and which also surfaced on the soundtrack of the cult film Dumb and Dumber. A firm favourite of Manchester legend Morrissey – The Smiths singer was once was photographed wearing a Primitives T-shirts.

Extend your gaze down the line up and you may just meet the eyes of THOUSAND YARD STARE. Once described by NME as the “brightest hope for the future” this Berkshire-based band will keep you trained on them throughout their performance with tracks like ‘No Score After Extra Time’. The band who enjoyed the top spot in the Melody Maker independent chart for their now legendary ‘Keepsake EP’ were one of the most popular supporting bands on the early 90s indie circuit and would often tour alongside Carter The Unstoppable Sex Machine. Expect bourgeoning riffs and chest-swelling sing-alongs from the brilliance of the pre-Britpop era.

And last but not by no means least, MARK MORRISS is a singer songwriter who famously made his name with Brit-pop heavyweights: BLUETONES. Mark has fronted the four piece over a successful and fruitful 15 year period, scoring 14 top ten singles including the incredible and 3 top ten albums, whilst touring the UK, Europe and Japan.

Bluetones had their defining moment with the smash hit ‘Slight Return’, a hook-laden 90s anthem, which launched the London four-piece to the forefront of the charts. Their seminal debut ‘Expecting To Fly’ briefly knocked Oasis’ ‘(What’s the Story) Morning Glory?’ off the top of the UK albums chats and it wasn’t long before they were being touted as Britpop’s next big thing.

Over the last 20 years Mark Morriss have forged a lasting camaraderie with the venue and its audiences. The chance to see this lovable raconteur and a raft of
other era-defining acts is surely too good to miss.

Pre-Sale will be available on: Friday September 9th @ 10am, via Ticketline / Academy Facebook.

Doors will open at 1.30 pm. Tickets will be priced at £31.00 Advance SBTF.
All ages welcome, under 14s must be accompanied by an adult aged over 18