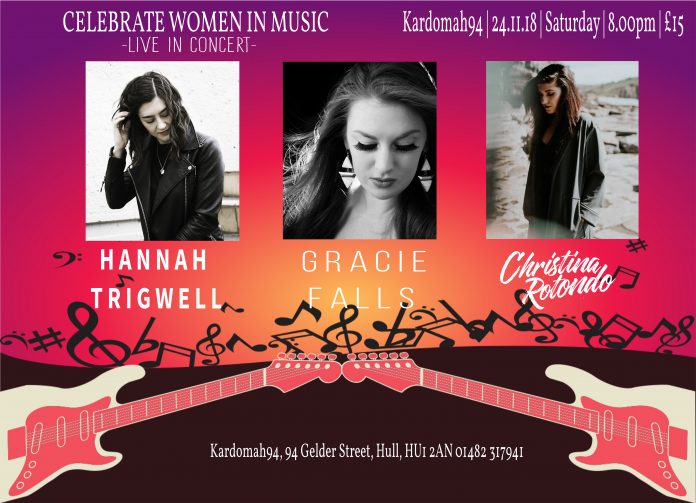 Hannah began her career busking on the streets of her hometown Leeds before being encouraged to upload her music onto YouTube. Since then she has achieved over 100 million views, numerous top ten international singles, including two Number One singles in Laos and Vietnam. During her biology studies at the University of Leeds, Hannah released two EPs of original music following a huge wave of interest from music fans worldwide. During the same year as achieving a Biology Honours degree, Hannah also won ‘Best Unsigned Artist’ in the Online Music Awards before setting off on a 5-week European tour.
Hannah completed a sold-out UK headline tour in October 2017 and is back in the studio to finish recording her debut album ‘RED’, coming Summer 2018.

Local singer songwriter Gracie Falls’ 3 words to describe her music are “emotive, unique and relatable” and Kardomah94 is her favourite venue. Gracie hails from Bridlington, loved music from a very young age, learning the piano and guitar and started writing poetry which then turned into songs when she was about 11 years old. Even with the gloss and the glamour of performing, winning a competition and being in the music industry, her favourite part is the song writing. Gracie won Recording Artist/Performer/Session Singer and Official UK Unsigned Songwriter Of The Year 2016. Gracie’s Debut album ‘Down but not Defeated’ is out now

Christina is a musician, content creator and social media influencer, based in Nottinghamshire in the UK, and creates a variety of content, from composing unique alternative versions of songs, original material, to quality video content for brands, ranging from music to beauty and lifestyle. A unique example of a female rock artist in the music industry, Christina’s music has continued to be showcased by the likes of Kerrang! Radio and BBC Introducing and has continued to build a online community from her distinctive ambient covers of heavy rock music.

Tickets are on sale will cost £15. Tickets will be available from the venue, Kardomah94 directly (94 Alfred Gelder Street, Hull, HU1 2AN). Online from Hull Box Office, See Tickets and TicketWeb.

Doors will open at 7.30pm and the first performance will be at 8.00pm.