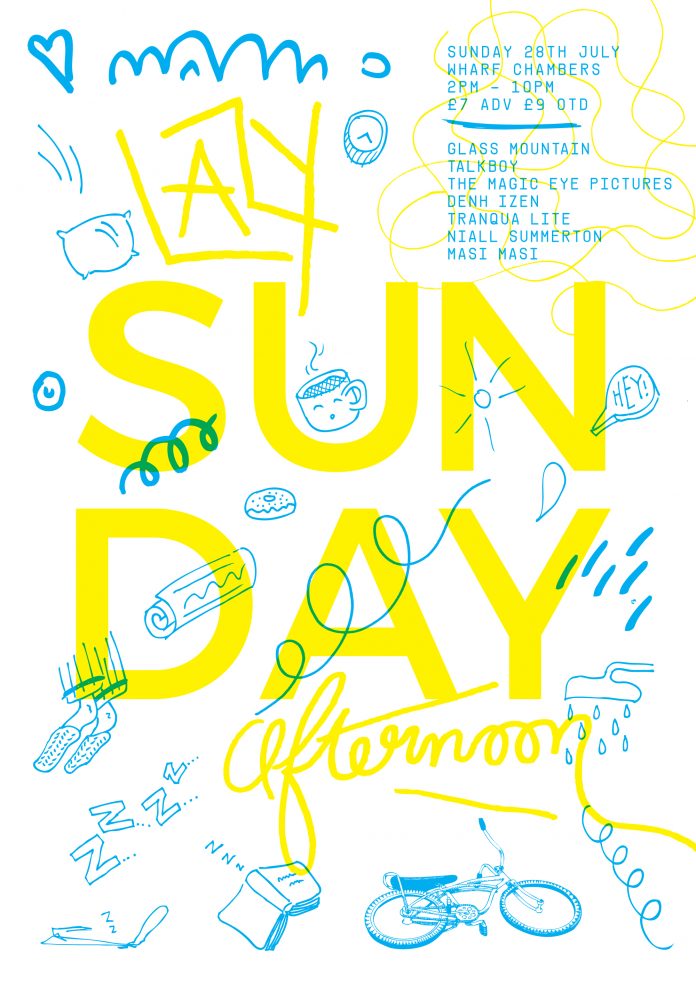 Following the beautiful vibes, glorious sun and amazing acts at the sold out LAZY SUNDAY AFTERNOON last year, the curators – Bradford’s cinematic alt-rock quartet GLASS MOUNTAIN – have announced another eclectic and exciting line-up for their third edition of the festival. Alongside this brilliant array of bands and artists, complementary gin and tonic will be served to those arriving for 2pm, with vast quantities of home-cooked vegetarian curry and samosas available during the middle of the programme to allow everyone to soak up the sun, have a drink and eat some food while you enjoy a perfect Lazy Sunday Afternoon.

TALKBOY are a group of six friends from Leeds who sing songs about each other, the people around them and the lives they lead. Championed by BBC Introducing both in West Yorkshire and nationwide, the quotes keep flying in: “It’s time to start believing the hype” [GIGWISE] “They may be new but they know exactly what they’re doing; Talkboy are a force to be reckoned with” [GIGSLUTZ] “From the first listen, you can see that Talkboy are one of Yorkshire’s most exciting prospects” [THE 405].

Contrived melodic indie made by people who never go outside, THE MAGIC EYE PICTURES are a Leeds quartet making music about things going on in their lives, their DIY ethos carrying into their incredible homemade videos. As they say themselves: “Four years in and still ripping off The Lemonheads”.

Disoriented indie from the big city, DENH IZEN is the London-based project of 17-year-old Tavish JW Westwood. One of his many projects, this particular guise sees the youngster channeling guitar music’s dark underbelly.

NIALL SUMMERTON’s softly crooned indie folk comes from a culmination of inspirations, not least Joni Mitchell and Neil Young. His laid-back pop instrumentals, with a hint of country twang, meet heartfelt lyrics to produce the feeling of a cool glass of freshly made lemonade on a warm’s summer evening.

Having formed less than a year ago, MASI MASI take influence from Cage the Elephant, Bowie and STRFKR to shift between catchy electronic pop and crunchy alternative indie.

Firmly in the cinematic alt-rock category, Bradford quartet GLASS MOUNTAIN make life-affirming, sky high guitar music that empowers and devastates in equal measure with a heart-wrenching balance of aggression and delicacy. “Glass Mountain are not here to be timid; dressed in white and glowing in the black light, they let slip their glacial melodies with an explosion of noise, and it is a good noise. Each broad guitar stroke, each rumbling bass line, each simple, effective vocal builds my confidence in them. A dirty Floyd, full of discord and unease.”

SINGLE NEWS: The Goa Express drop ‘Be My Friend’