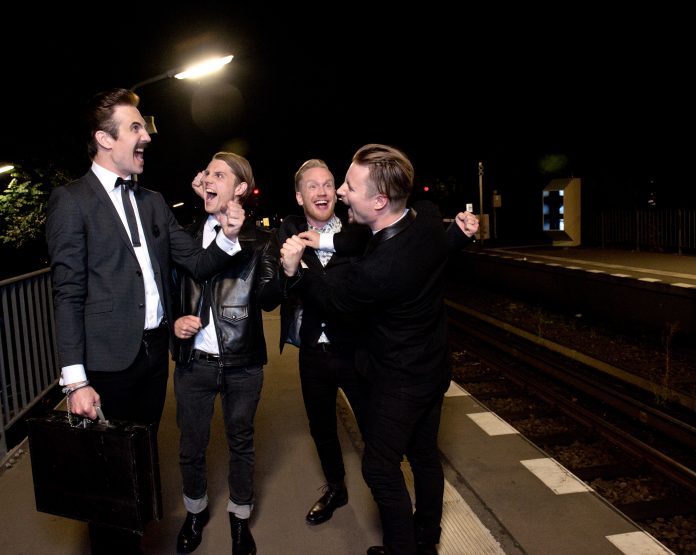 Prior to this year’s Download, Royal Republic – who first joined forces in Malmo Rock City in 2007 – appeared over here with Theory Of A Deadman; now the Swedish party-starters (vocalist / guitarist Adam Grahn, guitarist Hannes Irengård, bassist Jonas Almén & drummer Per Andreasson) are back to play shows of their own, continuing to fly the flag for third studio album, ‘Weekend Man’, released earlier this year via Spinefarm Records.

Comments Grahn: “A wise group once said, ‘being in a band is like being in a relationship, and concerts are like sex’. The return to Download Festival was nothing short of orgasmic on our part, and by the time Royal Republic hit the shores of the UK again in October, the nymphomania will know no limits!”

‘Weekend Man’, crafted in Berlin’s Fuzz Factory Studios by producers Christian Neander & Michael Tibes, sees the dapper Republic-ans delivering their customary rock thrills with even greater gusto – a bold statement of wild-eyed intent founded on big hooks, mountainous melodies and a signature sense of fun. Generally speaking, the aim is to put smiles on faces, but now an’ then a deeper, darker side peeps through, as displayed on the band’s latest video – an “epic tale of love, death & desperation” shot in support of new album track ‘Any Given Sunday’ and featuring legendary Swedish soap star Gunnar Mosen.