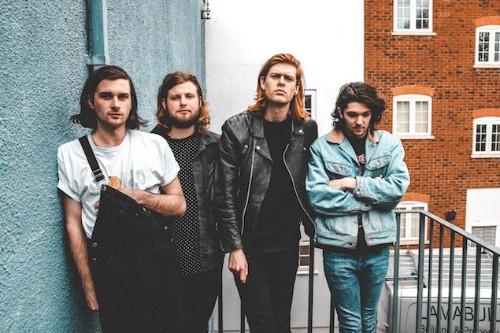 “[The Amazons] are already getting people hot under the collar with their rowdy rock’n’roll.”– Beat Magazine

Ascendant rock quartet The Amazons received a flurry of positivity to their recent Fiction Records track ‘Nightdriving’, which was premiered by Huw Stephens at Radio 1, championed by Steve Lamacq at 6 Music and picked as Q’s Track of the Day. The band build on their growing acclaim by unveiling their new single ‘In My Mind’ which impacts on October 14th.

“‘In My Mind’ shows a heavier and darker side to the band,” says vocalist/guitarist Thomson. “It gives our fans more of an idea of where the album is going, which is exciting for us to reveal. Lyrically, it’s probably one of our most personal and cathartic songs. It’s about knowing you’re not in the right relationship but stringing it along because you’re afraid of being alone. It’s the acknowledgement of not being the good guy in the relationship and accepting it.”

Inspired by the likes of Queens Of The Stone Age and Arcade Fire, The Amazons – completed by Chris Alderton (guitar), Elliott Briggs (bass) and Joe Emmett (drums) – formed in their hometown of Reading. They first gained traction on the back of their debut EP ‘Don’t You Wanna?’ (particularly its track ‘Ultraviolet’) and they continued to build their reputation with the follow-up ‘Stay With Me’ and then ‘Nightdriving’.

The Amazons’ summer festival touring has already encompassed Truck, Beat Herder, Standon Calling, Y Not and Kendal Calling and continues with the likes of Festival No.6 and Neighbourhood Festival. They’ll then embark upon a full UK tour which including their biggest London headline show to date at Oslo in Hackney.