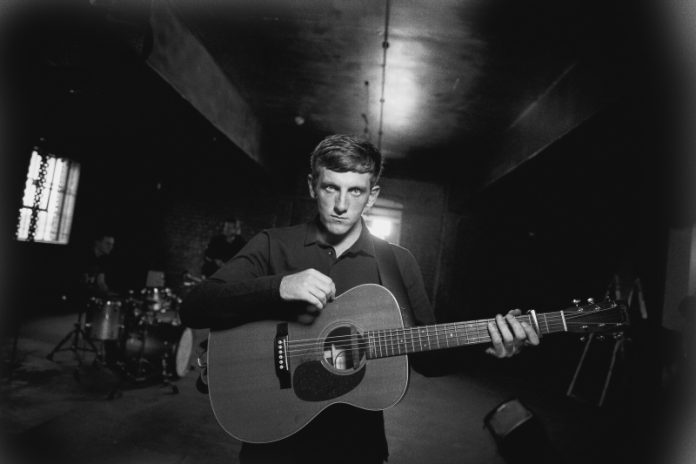 I met Louis Berry in his dressing room at the Manchester venue, The Castle, ahead of his performance there on 22nd Jan 2016. We instantly developed a rapport and I can say that he was a helpful, charming and straightforward interviewee, with no airs and graces and a willingness to communicate that isn’t always the norm in this setting.

I asked him firstly about a subject he’s discussed before, namely his difficult upbringing, initially in Kirkby, with a heroin addicted father, and whether that was what made him become a singer-songwriter, or was it always in his bones? He reflected that he wouldn’t say it was what made him become a singer-songwriter, or whatever label one wanted to place on him as a performer, but that he was sure it had made him become a better one. Although he’d grown up with no ambitions in this area, after being “up to no good” for a while, he’d become acquainted with some musicians who were making their way in the business and it had given him pause for thought that he’d be capable of following that route himself.

He’d always played guitar as a youngster, not out of any great love for guitar music or a wish to be a performer, but just because he could, to pass the time and for fun. After a chance meeting with some older musicians, he picked up a guitar and started jamming, and from their reactions realised it might be something he could do well at. After working on his material for a while and carrying on “getting up to no good” ̶ which he assures me was no small time stuff, he was running with a crowd who were big players in a well dodgy arena ̶ he was encouraged to ditch his wrongdoings by these same rogues, and focus on developing his talents as a performer.

From these seeds he blossomed and was introduced to a producer who’d worked with Coldplay and Paulo Nuttini, who recognised a nugget of talent and remarked that Louis reminded him of Paulo at the same stage in his career, not musically but personally. Despite such high praise, Louis still didn’t take it too seriously, but made a demo and started to recognise himself and his songwriting abilities as worthwhile. From there he began writing and performing in earnest. Seeing other performers getting on, whom he had no reason to feel were better than him, encouraged him further, as he’s always had an attitude that unless there’s something physically preventing him from achieving something, he’d always do his very best to achieve it. This perseverance seems to have paid off in spades.

Louis has lived in a few different areas in Liverpool, and I asked how his mates received his output and successes thus far. Some had the initial stereotypical reaction that he must be crazy, wanting to be a singer, with his background, but as time went on, more and more saw what he wanted to achieve and became supportive and encouraging. Most are proud and see him doing what they now see he was meant to be doing. Some are in awe, but he asks them not to be, because to him it’s just normal life and what he happens to be up to at the moment.

We discuss the apparent glamour of the music world as it appears to others but it’s clear Louis has his head screwed on and sees this world for what it is, exciting, fun, fulfilling maybe, but with glamour being barely in evidence at this stage of his career. He lives mainly on the road now and goes back to Liverpool frequently, but doesn’t have a permanent abode, as is wont for any up-and-coming young rock ‘n roller.

Next I asked about a phenomenon I’ve noticed recently, that of more young men who play guitar and write their own songs, getting a chance and making it in the music biz. Ed Sheeran and Jake Bugg immediately spring to my mind, but there are many more than there used to be but ten years ago, something of which I approve. I see this as a reaction to the pappy nature of much pop currently staining the reputation of the charts, which Louis has discussed in previous interviews, remarking on the ‘fast-food’ nature of much contemporary chart fodder. I ask Louis’ opinion on this and he agrees. He feels it’s a phenomenon that afflicts much of popular culture in these straitened times, leading to mass frustration, with those at the bottom of the scale having no legitimate outlets or reflections of their struggles. He feels that the days of listening to gangster rappers banging on about their bling and their ho’s are numbered and hopes for the days when there is a revival of more mundane, and higher, concerns being reflected in music and culture more widely.

Louis strongly feels that we are living in divided times, with a majority “completely asleep and taking no interest whatsoever, in truth” with a devoted minority now actively seeking music that they see as more truthful, not just lyrically, but in the spirit of the compositions themselves. He sees rock ‘n roll still has “the ability to give people that fire, you know, and soul”. For me that’s a lovely definition of what rock ‘n roll is all about and leaves me with no doubts about Louis’ authenticity.

Next I put it to him that rock ‘n roll is a genre that is struggling with its identity, at the moment, and may be heading for its death throes. Louis agrees, but thinks it might have most to do with the very name rock ‘n roll itself, rather than the current state of the music. He only uses this label about his own music because others instantly do, on hearing his work, but he just sees himself as a singer and performer, and feels he has as many elements of soul and other genres in his work, as he assures me I’ll see tonight when he performs. He recognises that the term rock ‘n roll has now become antiquated and associated with a certain style from the distinct past, rather than for its energy and authenticity, which is what matters. To quote directly, “It’s not that again, it just fells like that again”, which is Louis’ reflection that we live in the same age as when rock ‘n roll first hit the world in terms of the threats to the peaceful ongoing existence of the world, such as threat of conflict and nuclear war, and the lives of those not fortunate to be born privileged, and the message remains the same for these eternal themes.

Lastly, we touch on Louis’ influences. In songwriting terms he’s always derived a lot of inspiration from traditional Irish music, a taste I avidly share, as you’d expect so with a name like Kavanagh. He loves its authenticity and ability to tell the tale of the underdog. Dylan was also a major influence, particularly through his ability to take folk themes and morph them into the rock ‘n roll genre. Johnny Cash is someone he knows he’s often compared to, and like me can see why, and is an artist he greatly respects, but agrees with my counter that when playing acoustic guitar he has a lot more of Jerry Lee Lewis about him. For Louis’ it’s authenticity that counts, having been an aficionado of rap/hip-hop “when it was real”, and he hastens to listen to the music of any artist who he thinks is “for real”. As for playing style, he has no major influences and doesn’t envy the technical skill on guitar of any particular artist, seeing the guitar as something that he uses in combination with his voice, to express his artistic, authentic feelings into song, “like a translation tool, to express my lyrics”. He feels that his songs come to him “supernaturally, rather than naturally”, lyrics being delivered to his psyche from the gods above.

After that pleasant interview with a thoroughly interesting and pleasant young man, and a brief mooch around my favorite city, we moved to the main event of the night, Louis Berry live. The gig was long ago sold out, and it was clear from the accents around me before the set kicked off that many Scousers were there, as well as Mancs coming to check out this phenomenon for the first time. Louis played with a young and technically proficient back-up of drums, lead guitar and bass. They made this intimate and cosy venue rock and spit with energy and had the crowd transfixed. It was a supportive audience, with many shouts of encouragement throughout the set, and a higher proportion of women than is the norm at most gigs in this genre and setting.

Louis kicked off with high energy numbers and he seemed at ease in the limelight, engaging the crowd and bouncing off their reactions, as well as giving them serious beady eye intensity when it was needed. But it wasn’t all frenetic rock ‘n rolling, with a couple of quieter, less fast-paced and balladic numbers making the cut. My favourites were ones I was familiar with from his previously-released EP’s, namely ‘Rebel’ and ‘.45’, which carried an energy and intensity that all present enjoyed and revelled in. As for his authenticity, I don’t think it can be questioned, and I’d be surprised if anyone who attended this gig felt otherwise.

The length of the set, say six or seven songs, was a little disappointing for me, but maybe Louis is of the ‘less is more’ school, or his management don’t wish to over-expose him at this stage. However, it’s quality not quantity that counts and he certainly delivered on that front. If you like your rock ‘n roll old style (although I’m sure Louis sees it all as new and fresh, which it is, as well) then you’ll like Louis Berry. If you like your music authentic, then you’ll also find he’s to your taste. If you like energy, vim, vigour and good songs then you’ll find he’s your cup of tea too. A great night, good insistent songs and a confident, genuine young performer got a good airing in Manchester. I wish Louis all the very best in his development as an artist. Keep up the good work fella.