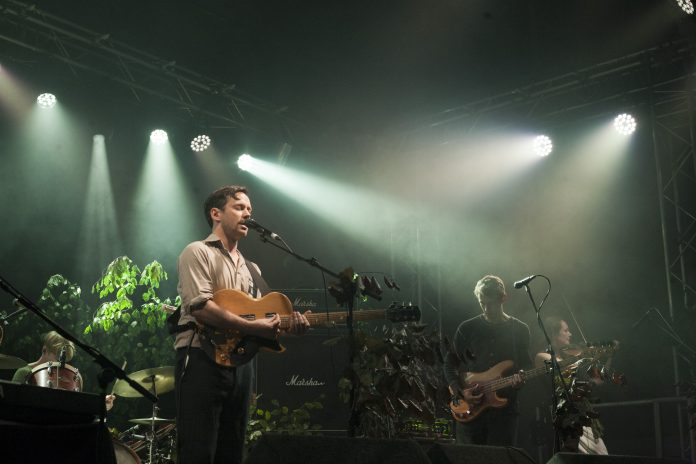 We have a rule on this website that reviews are meant to be balanced. However much you love a band you still have to find something you’re not so keen on. But rules are made for breaking – and if you’re looking for anything less than an eulogy, stop reading now.

However I did go with some trepidation – because pedestals are meant for falling off. Besides, I’d read the Guardian article back in January which described the Sea of Brass gig (where the band were joined on stage by Redbridge Brass Band) as ‘misguided’ and ‘more like a forced marriage’, with reviewer Ian Gittins left longing to see this ‘fantastically idiosyncratic band again minus their temporary playmates’.

If anything, the Long Division gig at Unity Works was reassuringly unspectacular. This was a gig about the music first and foremost and, for this terribly biased reviewer, it did nothing but deliver quality from start to finish. Apart from their familiar foliage (trees in pots on stage) and dramatic change of lighting colour schemes between tracks, there was none of the haunting background film of sea birds, Christmas tree lights and antler sets which have previously accompanied the band on stage.

And while we are on the discussion of ‘spectacle’, is it sexist (especially from another woman) to comment on the wonderful theatricality of Abi Fry’s floor length black and white dress? This barefoot viola player who is the only member of the band not conventionally clad in jeans and shirt, may appear on the edge of the stage, but her presence is strongly felt through so many of the songs. The bane of photographers, she spins constantly, lost in the beauty of her own performance – the unmistakable sound which together with the cornet (played by Phil Sumner – also on keyboards) fronts so many of the band’s otherwise guitar-heavy tracks.

Oh – and I do like the guy with the flying hat and the hand drum (and please, please will someone tell me what his name is!). Stalking about on stage and occasionally standing on the heads of the photographers in the pit below, he has a childlike enthusiasm that’s hugely pleasing to watch.

Now that makes it sound like I’m not appreciative of the wonderful skills of the other band members – and believe me I am! I marvel at the way the original three members – brothers Jan Scott Wilkinson (vocals, guitar), and Neil Hamilton Wilkinson (bass guitar, vocals, guitar) and Matthew Wood (drums) have created such a distinctive feel with their music. Jan and Neil effortlessly swap places to front different songs – but the sound is always unmistakably BSP. Haunting, hectic, wild and immaculately under control at all times.

And this gig was definitely all about quality. Now in their twelfth year and very much the darlings of the music world (this middle-aged reviewer once gained a considerable number of Brownie points from a Radio1 presenter when she named BSP as one of her favourite bands), this was a consummate performance of a accomplished band – who still have a passion and a freshness about their music which communicates in bucket loads to their eager audiences.

The band don’t talk on stage. They simply perform. One minute the audience is waiting and then they’re on – and the venue is flooded by the haunting fragility of the opening of ‘Machineries of Joy’ – which builds into the understated but confident anthem to… well who knows what exactly, because it’s hard to pin down any of BSP’s lyrics too precisely. As a band who started their career with a song about the fear of drowning, you can never be quite sure where you stand with their eclectic take on the complicated matter of living. But there is something of an upbeat feel in the

‘You are a vision of extraordinary contortion
An athletic form of warm distortion
And the triumph’s yours, we lose again’

‘Apologies to Insect Life’ is another track that teases you for a moment – with a seemingly tentative start that has your nerve endings jangling, before it moves swiftly into a frenetic burst of drumming and guitars. This track – from their first album ‘The Decline of British Sea Power’ – is so taut that any minute you feel it might break through its boundaries… but as the tempo chops and changes – from frenetic to sudden slows – there’s a palpable tension that shows this track is always firmly under control. And as Sumner moves from keyboards to cornet, we are reminded that this is a superbly orchestrated song . The audience is already working themselves into a gentle frenzy.

‘Remember Me’ was ranked by a poll of Radio6 listeners as their number 9 favourite song of all time – between Johnny Cash ‘Hurt’ (8th) and Radiohead’s ‘There There’ (10th). This reviewer has long had it on her ‘tracks to be played at my funeral’ list, so all she’s going to say is that it didn’t disappoint. Although in some ways it did feel a bit soon to launch into this gloriously gloomy anthem about ageing and beginning to disappear

because some of us like to keep our emotional powder dry for as long as we can, holding back our moments of wallowing in euphoric melancholia for later in the performance. Personally I will never be totally satisfied until BSP play ‘Remember Me’ for their finale encore. See – I have found something I wasn’t 100% happy with! )

‘Scottish Wildlife Experience’ is a rousing guitar track with a top note provided by the viola, but has never been one of my favourite BSP tracks. But the audience loved it and were going wild for more of this upbeat sound.

‘Blackout’ is one of those tracks that has the hairs on the back of my neck standing on end – and is for me quintessentially what BSP is all about. Lines like

As you Blackout
Blackout again
My love’

set to a plaintive, heart-shifting melody, are an open invitation to collapse into the painful splendour of this music, the sadness of our beautiful but tainted planet. And sure enough, the audience is floating on a tide of unredeemable longings, swaying and singing along to the bits of chorus they can manage. But you have to understand – BSP does this to you. They are experts at reaching in and grabbing you just where your soul is.

This reviewer is getting rather carried away in her efforts to get you to see just how meaningful this music is, and you might be forgiven for thinking that it’s BSP who are pretentious. But pretentiousness really isn’t something you can’t ever level at this particular band. Thought- provoking, passionate and inspired maybe – but never so polished or ‘up themselves’ that you start to question where the sincerity has gone to. This is mature music for mature audiences, who like to think about what they’re hearing. And don’t care if the songs are far too complex to sing along with.

The audience absolutely loved the performance of ‘No Lucifer’ – which is always a favourite. This equally uplifting anthem about armies, Sodom, Hitler Youth, ‘metal skull and bone’ still holds out the hope of

‘A Raleigh twenty, yeah!
A little lost roe deer,
The wind in your hair.’.

And the fragility of the lyrical questions ‘Is that what the future holds’ has a wistfulness that contrasts strongly with the full throttle chanting of ‘easy, easy’ which the rest of the band takes up. This could be football terraces or a General inspecting his troops, but we’re all past caring. We are eating out of the band’s hands and we’re wherever they want us to be…

‘We’re All Waving Flags’ is a pulse-stirring anthem to welcome Eastern European immigrants – focusing on the joys of sharing beer and Czech ecstasy. It combines the gleeful lines

‘Beer is not death,
beer is not life,
It just tastes good
especially tonight’

with the profoundly caustic assertion that

and you can’t help but think the joke is on anyone who wants to read anything too profound into this cheerfully tolerant song.

‘Carrion’ is an old-favourite but the band still plays it with the vigour and freshness of a new track and the crowd goes wild. Involving the viola, two keyboards and our friend in the flying hat with the hand drum, this ballad of ‘brilliantine mortality’ is another track about the tensions between the natural and manmade world – focusing this time on the sea itself. With fabulous lines like:

‘Can stone and steel and horses’ heels ever explain the way you feel,
From Scapa flow to Rotherhithe,
I felt the lapping of an ebbing tide’.

it’s hard to believe with all their focus on water that BSP were originally called British Air Powers – and only changed their name after their club night in Brighton, called Club Sea Power, became so popular. It’s more like a tidal wave in the front row where the audience are jumping wildly – and one over enthusiastic person has already been detained from scrambling across the photographer’s heads to reach the band on stage.

When Ursa Ultra (a human in a bear costume) appears among the audience there’s a visible ripple of disappointment. This 8-foot high, cuddly but somewhat unnerving, mascot is always a sign that the gig is winding towards a close. And sure enough the band leave the stage – and the audience wait patiently for the encore….which the band deliver with an especially haunting performance of their song ‘Lately’. This isn’t a track I’ve ever raved about when it plays on my iPod but it’s something that works especially well on stage, as it aptly swells to meet both the size of the venue and the audience’s expectations.

The band finish with ‘A Rock’ – a track which doesn’t especially top my ratings, but always seems to go down a storm with BSP audiences. Watching the enthusiasm with which they play, I’m reminded of 17/18 year olds giving it their all at their first big stadium performance… and you just can’t help love this band for everything they deliver to their audiences.

British Sea Power is a band which never lets you stay in one mood for very long. Just as their music moves from the haunting melodies of lonely fishing villages, fierce beats of battlefields and musings on self-obliteration, through to the anthem-like feel of songs about drinking and waving flags, BSP’s repertoire embraces every aspect of what it takes to be human. Everything is bitter-sweet – everything moves from stillness to hyperactivity – gulls soar above oil rigs and armies march relentlessly. People drown, get old and oil spills happen on windswept beaches… But somehow we’re never asked to get down about this. There’s a fierce resilience in the music that says, there will still be perfect cloud formations at sunset and dancing bears at the end of the performance. 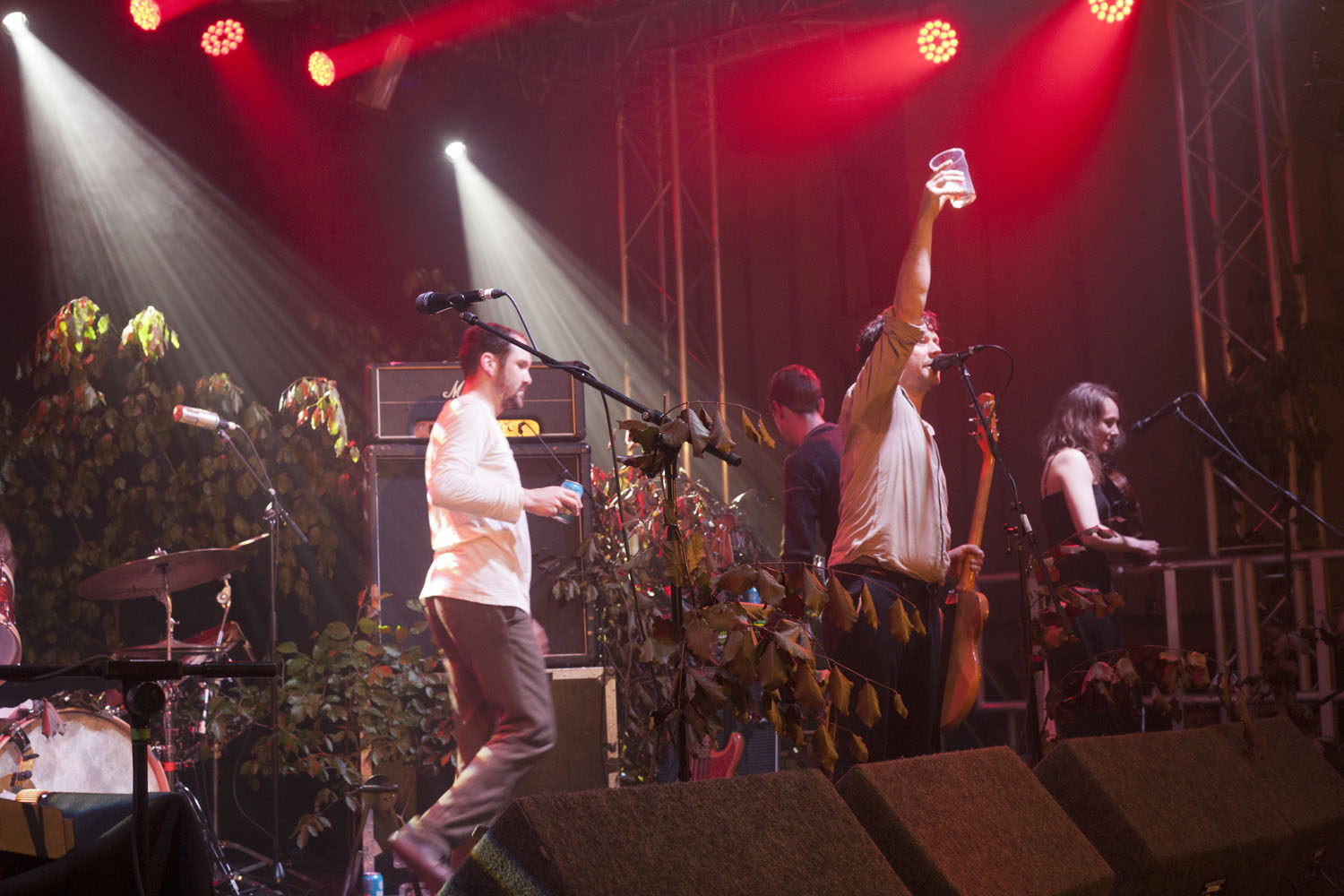 British Sea Power are a six-piece band variously originating from Cumbria, Yorkshire, Ealing and Shropshire and are currently based in East Sussex and on the Isle Of Skye.