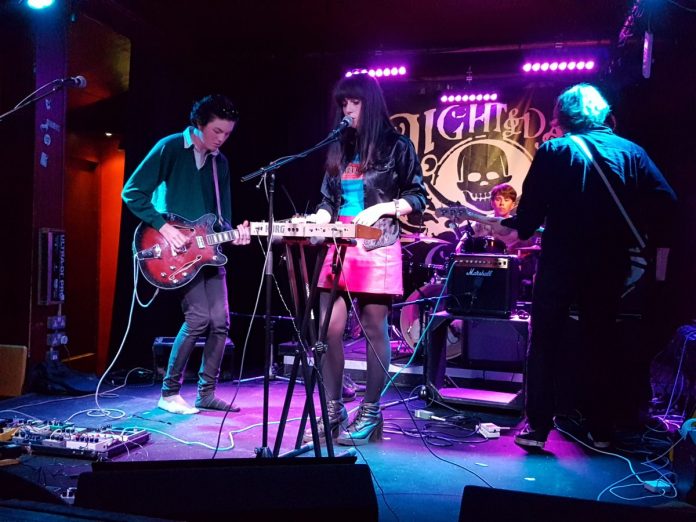 It was with a sense of anticipation that I made my way to Manchester’s Night & Day Cafe to see jellyskin live for the first time. A sense of anticipation shaded with a slight apprehension – would I like them live as much I like their recorded music? It’s happened to me before, bands I loved listening to at home but hated playing live.

Before I go any further I have two things to say. The first is that I’m a fan of jellyskin so don’t expect an an objective review, and the second is that there was actually another band playing that night – Sealand – who I wasn’t able to stay and see.

It’s showcase night at Night & Day so before jellyskin I got to see Danny Shaw – an indie-folk singer – and The Empire Police – an indie/alternative rock band from Preston.

The first thing that struck me about Danny Shaw was his voice. His voice has this, what I can only call, a ‘cracking’ quality about it. In somebody who didn’t put quite as much passion into his singing as Danny this could be considered to an affection but I found it really rather compelling – but perhaps more effective on the faster songs than the slower. I’m not a huge fan of singer/songwriters – with some exceptions – but Danny’s words are great and that kept my attention. His song ‘Would If I Could’ (at least I think that’s what it called) really stood out for me. I’ve certainly made a mental note to see Danny again and I recommend you catch him if you can.

At first I wasn’t sure about The Empire Police but then I was struck by two things – one the words in their songs are fantastic, and two that musically this is not just your plain old indie rock – I was catching flashes of a funky bassline and some rather great drumming. And I can’t not mention Jordao Bassa – their singer – who just has this stage presence.

The songs are catchy and the performance is fab. OK so yes, they do sound like like a certain Sheffield band in places but they have something that marks them out. And their performance provoked the only time I have ever seen somebody stage ‘diving’ into a group of about five people. Well it was more of stage jump, but you get the idea.

By the end of their set I was actually hoping for more from them. The Empire Police are fantastic.

And so we come to jellyskin. They don’t exactly tear into the opening track ‘Eater’ but it’s not an easing into it either, it just starts. I am hugely relieved by the time it’s halfway through, I do like them live (not that I ever really thought I wouldn’t). So now I could settle down and enjoy the set.

jellyskin don’t say much to us, there’s a couple of thankyous and bizarrely a thumbs up from Will (guitar and vocals). And Will explains that they have a stand-in drummer because their drummer wanted to play bass. Other than that they just play. I rather like this, I like a band that just plays.

Will moves around but Zia (keyboard and vocals) doesn’t, she sings and plays her keyboard. Obviously you can’t move around the stage when you’re playing keyboards but the thing that makes her compelling is the way she does it. I overheard somebody describing her as ‘moody’ after their set, I’m not sure I agree with that – she certainly didn’t come across as that during my brief chat with them after the set – it just looked like intense concentration to me.

Their live sound seems to be a little looser and a little more psychy to me, but if I wanted to hear songs played exactly the same as the recorded versions I could just stay at home and listen to them. A live performance should be different. And although it’s not, to my mind, a conventional band performance, it is a performance, one that makes us concentrate on the music that is being played. It also means that there are things that stand out like Will donning sunglasses for the track ‘Milk of Magnesia’ (a track he sings on). A somewhat strange thing to do, but it does fit the mood of the track.

Musically it’s there. Will’s guitar sparkles and soars, Zia’s keyboards providing both lead and texture (and importantly mood and atmosphere, jellyskin’s music is all about mood and atmosphere), and the bass and drums hold it all together. And most crucially for me, Zia’s vocals are great. If you’ve read my single reviews you’ll know I just love these.

If you were to hold a gun to my head and force me to pick out favourite tracks from the live set it would be ‘Eater’, ‘Milk of Magnesia’ and the current single ‘‘Only Rain (Flows to Beach)’ – the nasty section in this track really really stands out live. But only if you forced me. I honestly really enjoyed the whole set.

The point of a review is really to tell you whether it’s worth you going to see a band, so I guess I need to address this. So if you like music that is post-punky, psychy, gothic, moody and atmospheric, and you like a live gig to be an experience I’d suggest you go see jellyskin.

But you knew I’d say that, didn’t you.