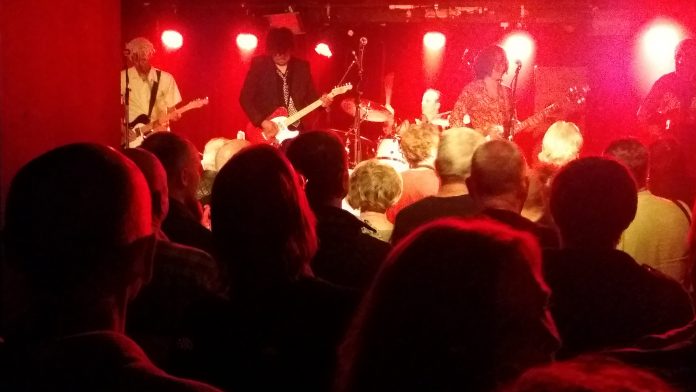 Spangled guitar, grooved out rhythms and glorious harmonies marked out an evening dedicated to Arthur Lee, original Love front man, and the ten year anniversary of his passing. Even Johnny Echols, Lee’s childhood friend and lead guitarist in the band’s earliest incarnation, was on hand to conjure the captivating riffs and exquisite guitar solos synonymous with a band who are icons within the genre of late sixties psych-rock. And it was within this vibe of Woodstock infused nostalgia that we, as an audience, in awe of heroes, escaped along a dreamy, psychedelic rabbit hole together. One leading to bold, pumped up basslines, sweet waterfalls of guitar and the eternal sunshine and positivity of the Californian coast. This was the sound track of Cameron Crowe’s—film maker and seminal sixties music journalist—formative years. This was a band who were the musical contemporaries of mammoths, Creedence Clear Water Revival. This was an accomplished band, an accomplished band performing a raft of tracks from their enviable back catalogue; Love, De Capo and Forever Changes. This was not pastiche, an eighties or nineties attempt at recreating the sound of an unrivalled and unique era—Love’s influence upon bands who flourished throughout this period is notably clear. This was genuine. The real and exclusive deal. A point proved by their raucous and decisive sign off.

Love, at the Ruby Lounge, was certainly revisited.