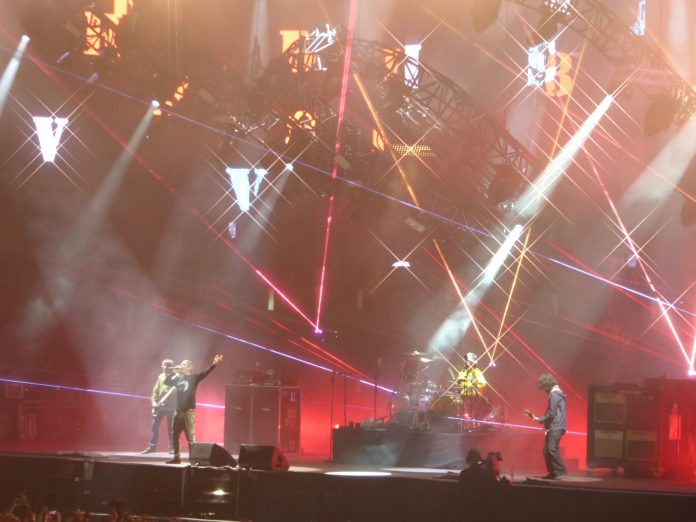 Something is afoot in Manchester this week, people are wearing strange hats, pubs are so full the patrons are spilling out onto the pavement and there’s a feeling in the Mancunian air that something good is coming. A friend visiting from Switzerland asks me, “Why do all the men in Manchester walk funny?” That’s the Stone Roses effect, I tell her. It’s only temporary and normal service should be resumed next week.

And so to the Etihad Stadium, my sole reason for visiting prior to tonight has been to watch Manchester City so it’ll be interesting to experience it as a concert venue. My companion for the evening is 10 years old, this has pros and cons as I find out over the course of the evening.

An impressive range of support acts have been lined up for The Stone Roses four night’s residency at the Etihad. I miss The Buzzcocks but arrive in time to catch The Coral. Playing songs from their latest album, ‘Distance Inbetween’ as well as older material; the crowd seem to prefer the oldies. With the opening bars of ‘In the Morning’ it’s almost as if a switch has been flicked, whether it’s familiarity with the song or the alcohol kicking in, the crowd suddenly become alive. I even see pints of beer being chucked into the air and there’s still two hours until the main act appear.

Backed by a full band, Public Enemy do an excellent job of warming up the growing crowd who obediently follow Chuck D’s orders to do various hand gestures, wave their arms in the air and join in with songs. Public Enemy have an extensive back catalogue and we are treated to favourites such as ‘Bring the Noise’ and ‘Don’t Believe the Hype’ amongst others. They also pay respect to Prince with the opening bars of ‘Purple Rain’ and a few heartfelt words. Referring to recent violent events in the UK and elsewhere, the band call for peace and unity demonstrating that Public Enemy are as relevant politically today as they always have been. They leave the stage with a heartwarming, “Yo Manchester! Public Enemy has always got your back” and it’s clear that they have won over a lot of people during their performance if the applause is anything to go by.

It’s getting close to 9pm and the waiting hordes are growing impatient, there is a real excitement within the Etihad and when the Stone Roses walk out the crowd goes wild. Reni’s drums and Mani’s bass come together forming the distinctive intro of ‘I Wanna Be Adored’, closely followed by John Squire’s distinctive guitar and then Ian Brown, accompanied by approximately 60,000 adoring fans joining in. Ian Brown’s vocals. There I’ve said it, the much scorned vocals, often out of tune and frequently flat but does it really matter? Not if this crowd’s reaction is anything to go by, I get the impression that people aren’t here for a perfect vocal performance. They’re here for nostalgia, to come together and to sing their hearts out.

The band plough through their back catalogue with smiles all round, they genuinely seem to be enjoying this. The backing vocals of the crowd are still strong. ‘Sally Cinnamon’, ‘Mersey Paradise’ and a personal favourite ‘Where Angel’s Play’ are all here. A revamped ‘Bye Bye Badman’ is dedicated to ‘the authorities’ reminding us that they are not shy about being outspoken. Similarly, with the decision to include ‘Elizabeth My Dear’ in the month that the Queen celebrates her 90th birthday. It was at this point that I took notice of the lasers and amazing backdrop and visuals, up until this point I’d been too preoccupied with watching the band. It was great to be able to watch Reni at work close up and on the multiple giant screens, probably the only drummer I’ve ever paid much attention to. I didn’t think it was possible but a gloriously funky ‘Fool’s Gold’ gets the crowd going even more, a never faltering Reni and Mani providing the solid rhythm.

The band’s last single, ‘All For One’ has divided opinion amongst fans, personally I hoped it would sound better live and now was the moment of truth. The mosh pit antics and the voices of thousands singing along as if they’d known it forever was a pleasure to witness, although judging by the number of people taking a loo or bar break here, it has a long way to go to be as popular as the older songs.

It’s John Squire’s turn to shine during ‘Love Spreads’ and he certainly does. Bearded and with his long hair covering his face he looks different these days but his guitar playing remains as impressive as ever. It turns into an extended funk-a-long which some could consider to be self-indulgent and perhaps use it for another loo break but nothing can stop this crowd. ‘Love Spreads’ is one of three songs from ‘The Second Coming’, sadly ‘Ten Storey Love Song’ isn’t included which is surprising considering how popular it is. Brown dedicates ‘She Bangs the Drums’ to ‘all the ladies’ as he beams and struts around the stage. Up until now I’ve been really impressed with Brown’s vocals, he loses it a bit on ‘She Bangs the Drums’ which doesn’t matter because the crowd step up and take over once again.

‘This is the One’ sees an entire stadium of people jumping up and down and I take the opportunity to leave my seat to join the madness on the pitch. As ever, the band finish with ‘I am the Resurrection’ and despite some more wobbly vocals it makes for a euphoric ending.

Reminiscent of the so-called 1989 Summer of Love, people are hugging, dancing and random acts of kindness are everywhere ranging from the person next to me buying me an unexpected drink because he could see I had a child to look after, to the scary looking bloke who approached us and then smiled and presented my companion with his bucket hat, I also watched as a younger man stepped forward to assist an older man climb the steep steps.

An impressive firework display is accompanied by newest offering ‘Beautiful Thing’ played through the PA as the stadium empties. I’m struck by the number of young people here, Heaton Park seemed to be full of 40-somethings reliving their youth. Tonight there are lots of teenagers and people in their 20’s who appear to have as much love for the band as the older fans. For a band that comes and goes, often without warning, tonight has confirmed that they have a huge and loyal support, it would also appear they have acquired a whole new generation of fans.