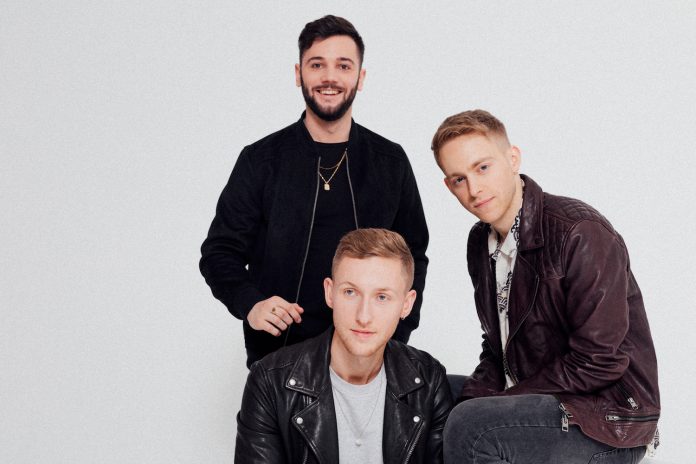 Flawes return with brand new single ‘Here To Stay’ – released via Red Bull Records on June 12th. The track is accompanied by a vertical music video in which masks are unveiled to reveal the personalities behind the sound. In a vast collection of intimate footage the band share their summer memories including a recording trip to LA and the jovial celebrations of England reaching the World Cup semi-finals.

Produced by Goldhouse (responsible for some of the biggest remixes and productions of the last year including Billie Eilish’s ‘Ocean Eyes’), ‘Here To Stay’ is blissed-out summer pop at it’s finest. With an even bolder, sleeker and defiantly uplifting sound than before, Flawes’ nuanced pop atmospherics and emotive lyrical topics make them tailor-made for both dancefloors and festival fields.

“It is an open letter to myself about the feeling of doubt that creeps in after you haven’t quite achieved what you set out to achieve just yet.” Explains front man JC. “It takes a journey through the questions you ask yourself during this period. The song then comes to the conclusion that I do actually belong here, I am “here to stay” and that I need to stop coming up with silly excuses and to overcome any self-doubt.”

‘Here To Stay’ follows the Huddersfield and London boys’ previous tracks this year ‘Don’t Count Me Out’, ‘When We Were Young’ and ‘Look No Further’ all of which have been gathering critical acclaim from around the world since their release. This comes after their self-imposed 18 months out of the limelight to immerse themselves in writing and recording to nail to sound they wished to define them.

Few bands launch as explosively as Flawes. Bolting from the blocks straight on to radio within a mere three months of forming. The reaction to their initial releases was instant. BBC Introducing played lead track ‘Don’t Wait For Me’ and, to Flawes’ astonishment, it was made Record of the Week on Radio 1, reached No.8 on Spotify’s viral chart and was chosen to soundtrack trailers for the hit US TV series Lie To Me. The next two years was a blur of shows, songwriting, airports and festival appearances.