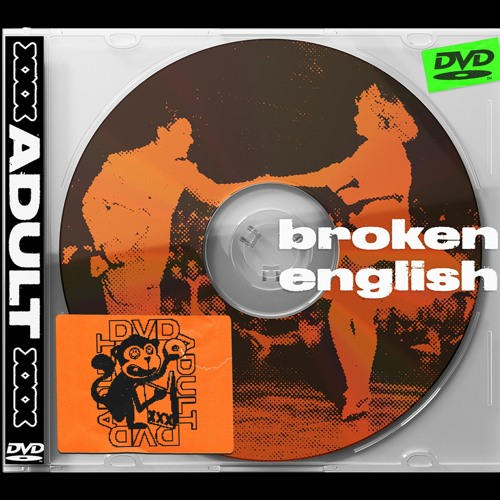 This is Adult DVD’s debut release. Let’s give you some info just so you know who’s involved in this band right up front. The band are Harry Hanson, Greg Lonsdale, Jonathan Newell, Danny Blackburn, Jake Williams and Charlie Howard. So you can see why my interest was tweaked. But, and it’s a crucial but, I wouldn’t be reviewing this unless it was good. And it is good, very very good.

Harry and Greg set out to fuse indie rock and dance in a kind of 2000’s stylee. And have they done that, have they made some that’s kind of indie rock tinged dance music or dance tinged indie rock? Well, sort of and then again not. It’s definitely dance music – you can throw shapes to it (even in your front room) – but it’s also warped. Warped synth sounds abound – retro 80s’ synth sounds – and warped guitar.

To my, admittedly older, ears it sounds kind of more 80s than 2000s. I hear hints of say, Thomas Dolby, hints of Big Audio Dynamite (one of Clash guitarist’s Mick Jones’ post-The Clash bands). But hey, that’s just me, you may feel differently.

The important thing, the main thing, is that this track is cool. It has a groove that doesn’t die. Clever, inventive sounds that just go all over the place, come at you from unexpected directions. It’s music that makes you smile, no that’s wrong, grin the widest grin. And if you’re too embarrassed to dance around your front room, there are great words to listen to.

Get your dancing shoes on, turn it up and dance yourself into a happy happy state.

Adult DVD is the product of lockdown boredom, complying with the questionable UK
Government’s even more questionable guidelines, Harry Hanson and Greg Lonsdale
wrote songs over the internet together.

Influenced heavily by bands like LCD Soundsystem and Soulwax, they both wanted to
give something back to the early 2000’s fusion of indie rock and dance music.

As the musical ideas formed into songs, Adult DVD then became more serious; and
Jonathan Newell, Danny Blackburn, Jake Williams and Charlie Howard joined the band.
Broken English is Adult DVD’s first offering, a song about being confused on this strange
little planet.